The question of same-sex marriage has divided influential thought leaders on the “right.”

Some, like Ryan Anderson, argue that “those who defend — and live out — the truth about marriage should redouble their efforts to witness to the truth about marriage while there is still time to steer clear of that chaos.” In essence, they urge opponents to continue to advance the “conjugal view of marriage” in an effort to defeat legislative (and perhaps judicial) efforts to recognize same-sex marriage.

Others, like Rod Dreher, contend that there is “a consensus emerging on the right that the most important goal at this stage is not to stop gay marriage entirely but to secure as much liberty as possible for dissenting religious and social conservatives while there is still time.”

Even if the courts do not definitively decide the question in the next few years, those who oppose same-sex marriage on the merits face a closing window of opportunity for securing religious freedom. Given the political and judicial momentum of same-sex marriage, it is far wiser to focus on the still-achievable goal of muting the impact of marriage equality on religious freedom, before that window closes, than to continue to oppose it outright.

In the year since the U.S. Supreme Court’s decisions in Hollingsworth v. Perry and U.S. v. Windsor, the unmistakable trend in same-sex marriage recognition, as Figure 1 shows, has been the shift from the voluntary recognition by state legislatures—and in one state, Maine, by popular referendum—to recognition mandated by state and federal courts. Since last summer, judicial decisions in 11 states, all but four of which are presently stayed, have brought the total number of jurisdictions now issuing marriage licenses to same-sex couples to 20. (The states are California, Connecticut, the District of Columbia, Delaware, Hawaii, Illinois, Iowa, Maine, Maryland, Massachusetts, Minnesota, New Hampshire, New Jersey, New Mexico, New York, Oregon, Pennsylvania, Rhode Island, Vermont, and Washington.) 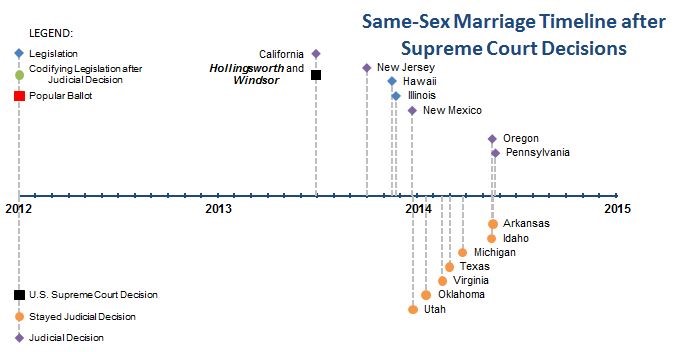 The recent explosion in judicial decisions obscures the fact that, overall, a significant generator of marriage equality has been state legislation and popular referendum, as Figure 2 demonstrates. 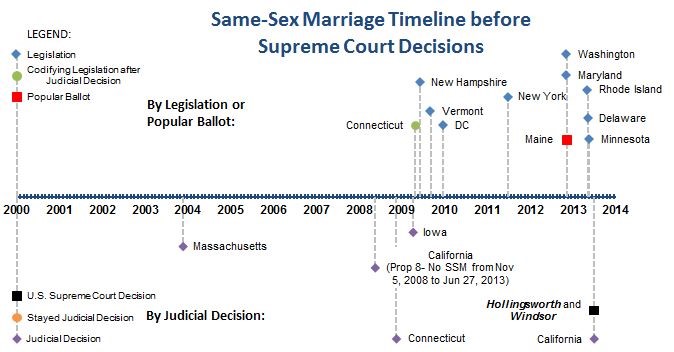 Unlike judicial decisions, state legislation and ballot measures recognizing same-sex marriage can balance competing interests—specifically, the interests of same-sex couples desiring to marry and those of religious objectors asking to step aside from facilitating or celebrating those marriages.

Enactment of marriage equality around the nation has been yoked directly to religious liberty protections—and is likely to continue to be in the near term, notwithstanding the Supreme Court’s decisions. Every single legislature that has acted to recognize same-sex marriage has built in protections for religious objectors who adhere to a traditional view of marriage, although these vary greatly from place to place, as Figure 3 shows. 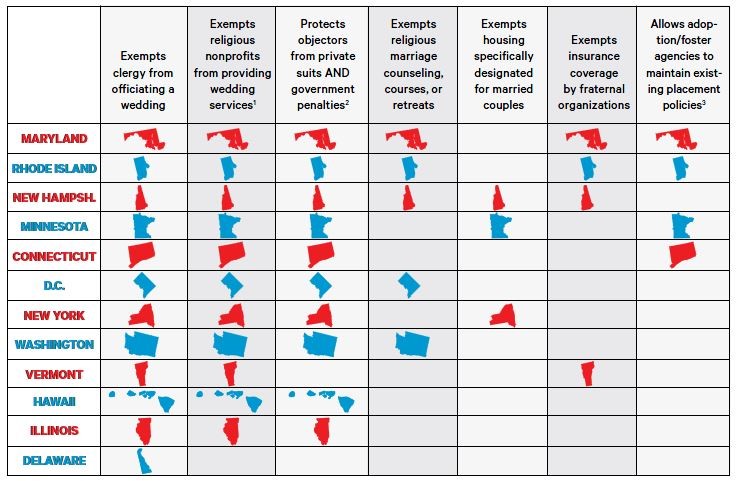 Legislators, who are bound to consider the broad interests of the citizens they represent, have grappled with whether religious organizations that cannot recognize same-sex marriage consistent with their faith commitments, should be at risk of losing government contracts, tax exemption, or access to government-provided benefits, like the use of public parks.

With a single exception (Delaware), every legislature has said no. This crucial protection has been afforded as a result of real collisions we have seen over the recognition of same-sex relationships. In one example, theSalvation Army lost $3.5 million in social service contracts with the city of San Francisco because it refused, on religious grounds, to provide benefits to its employees’ same-sex partners.

Such collisions can also happen when an authorized celebrant of marriages who is not a member of the clergy, like a justice of the peace or judge, is asked to solemnize a relationship when doing so would violate deeply held religious convictions—even if someone else is immediately available to help. Delaware permits such authorized celebrants to refuse to celebrate any marriage—a protection that I believe should be qualified by hardship to same-sex couples.

The need for some protections, whether qualified or not, is real. After Massachusetts andIowa recognized same-sex marriage by court decision, giving no new protections, judges and justices of the peace were told to “follow the law, whether you agree with it or not.” Many believed they faced a cruel choice: your conscience or your livelihood, hastening a wave of resignations.

While imperfect, these protections generally insulate religiously affiliated nonprofits, and sometimes individual objectors, from private suit and government penalty for refusing to solemnize or celebrate a marriage if doing so would violate their religious faith.

In short, state laws recognizing same-sex marriage delivered important gains to each side. Yet the recent wave of judicial decisions has caused some supporters and opponents alike to harden against future legislative and political compromises. This intransigence will slow the achievement of the kind of marriage-equality laws that serve both sides.

For example, after Garden State Equality v. Dow (link no longer available), Senate Democrats in New Jersey declined to back state legislation that would have codified same-sex marriage, explaining that the influential advocacy group Lambda Legal didn’t “want any kind of religious exemption.” The scrapped bill would have instituted a modest religious liberty protection for organizations identical to the one in same-sex marriage legislation vetoed by Governor Christie.

Some opponents are punting on compromise, too. Driven by the mistaken belief that efforts to protect religious liberty have “gotten exactly nowhere,” they contend that same-sex marriage and religious liberty are “fundamentally at odds” and vow to fight to the bitter end.

But we stand at a critical moment in regard to same-sex marriage in the United States. A review of the movement’s success—and the challenges it continues to face—reveals that both sides will benefit from staying at the bargaining table, although the gains to each will be different.

Supporters’ Easy Gains May Have Tapped Out

For supporters, the jurisdictions where a “perfect storm” of popular support, political characteristics, and background legal protections coalesced to yield marriage equality are nearly exhausted. In virtually every jurisdiction that has voluntarily recognized same-sex marriage:

the Democratic Party controlled both houses of the legislature; the Democratic Party held the Governor’s office; the states’ citizens ranked among the least religious in the United States; the states’ citizens ranked among the most educated in the United States.In every instance, enactment of a same-sex marriage law by the legislature or populace was preceded by a statewide law prohibiting discrimination based on sexual orientation. In this group, in no instance did the state constitution enshrine a ban against same-sex marriage. Even with such favorable characteristics for the same-sex marriage movement, it was, in fact, extensive negotiation around religious liberty that pulled same-sex marriage laws over the finish line, as the close vote counts made clear. Clearly it was in advocates’ interest to bargain.

As I explain below, advocates now enter more challenging terrain, in which the states’ background characteristics will not so clearly favor their cause. Nonetheless, advocates can secure marriage equality today by continuing to negotiate within the legislative process. One should expect that the “local solutions” in these more challenging states may increasingly tilt in favor of religious liberty protections.

For objectors, the advantages of bargaining are greatest at present. First, the real nightmare for religious liberty comes from judicial decisions, where the courts are incapable of balancing marriage equality with religious liberty.

Second, the bargains that can be struck today are likely to be materially better than ones struck in the past in solidly Blue states. Bargains reached now are likely also to be materially better than any that may be available in the years to come. As the following discussion shows, the political characteristics in states going forward favor stronger religious liberty exemptions, but at some point, support for same-sex marriage will so balloon that it will swamp everything else. Once that happens, marriage recognition will doubtless be adopted without religious liberty protections.

Figure 4 shows the growing nationwide support for same-sex marriage, using projections by Nate Silver, which fit with the trends chronicled by Pew and others. In Figure 4, the first map on the left shows public opinion about same-sex marriage in 2008, with blue showing support and red marking opposition. The strongest support and opposition are in the deepest colors. Moving rightward, Silver’s projections for 2012, 2016, and 2020 show blue washing across the country.

The demographic profile of those opposed to same-sex marriage can only make same-sex marriage more inevitable. Social scientists and polling groups alike have all documented a generational divide on the issue. In general, younger people are more supportive, and support reliably drops off with the age. As I document in a new article, this generational divide shows up in every state and means that matters are only going to get worse for opponents as the so-called Silent Generation passes on.

Given the burgeoning support for same-sex marriage, opponents should strike now while they can, securing in the halls of the state legislatures and at ballot boxes the strongest religious liberty protections they can. Moreover, if opponents do so, before courts mandate same-sex marriage across the United States, the religious liberty protections they are likely to secure should be more robust.

Why? Because, in the future, the legislatures of states that do not now recognize same-sex marriage are largely controlled by Republicans, with Republicans in the majority of Governors’ mansions. These are the states in which the citizens have less formal education and rank among the most religious in the country, as Figure 5 shows. 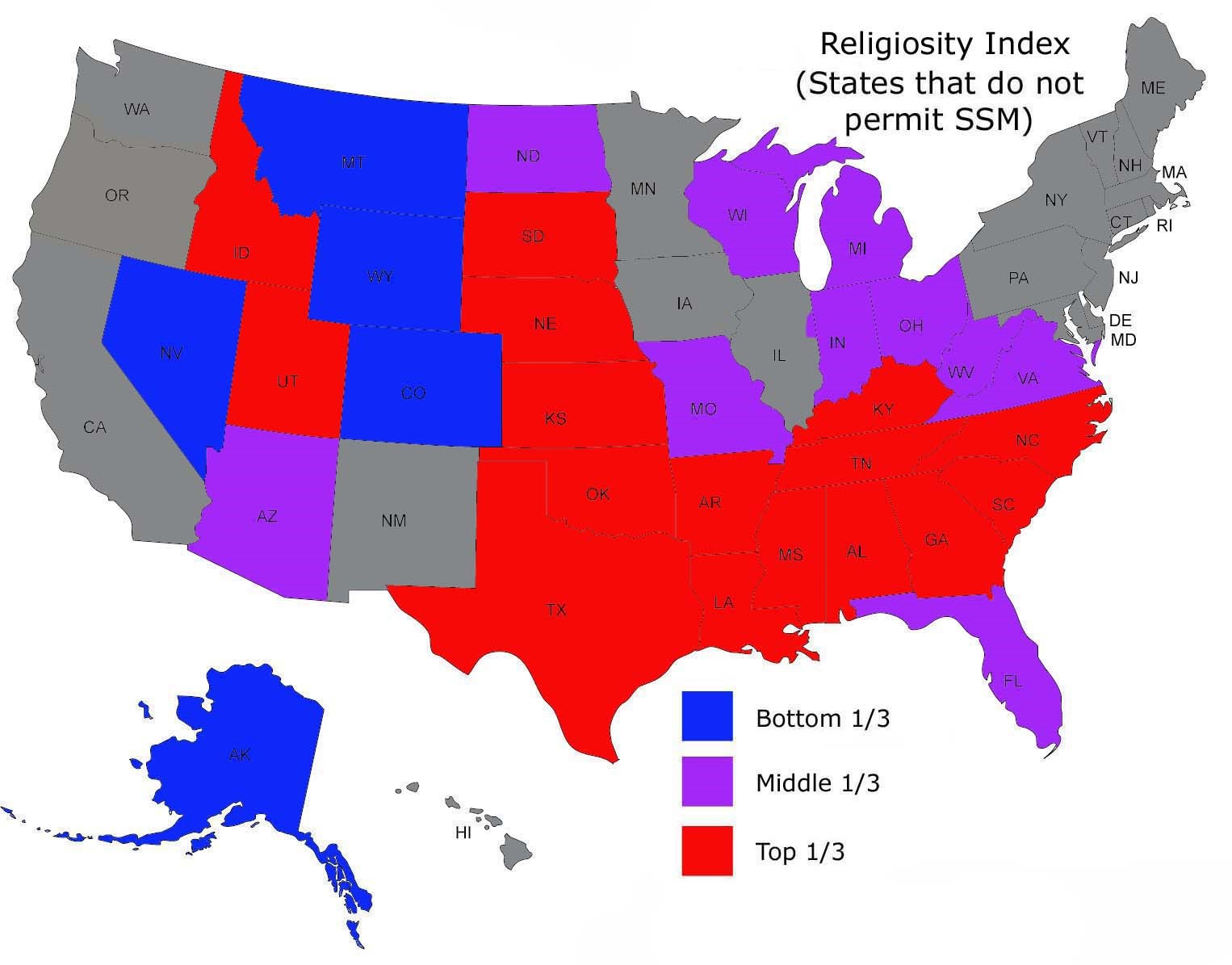 A State Constitutional Ban Is a Maginot Line

The impulse of some opponents to dig in, relying on state constitutional bans to push back same-sex marriage is misguided. State bans do not provide the bulwark against the erosion of traditional marriage that some believe. As Figure 1 amply illustrates, the courts are rapidly striking down these bans. And even if judges do not strike them down, they are not written in stone.

Figure 6 shows the states with constitutional bans and the comparative “lock-in effect” of these bans. To be sure, eight state bans exert a “strong lock-in effect” by erecting significant hurdles to amendment, such as requiring two-thirds of the legislature and a majority of voters to undo the ban. But eight other state bans exert a “mild lock-in effect”—requiring only a majority of legislators and voters. Finally, the bans in 12 states exert almost no effect at all—requiring the collection of signatures and a simple majority to delete the provision from the state’s constitution. 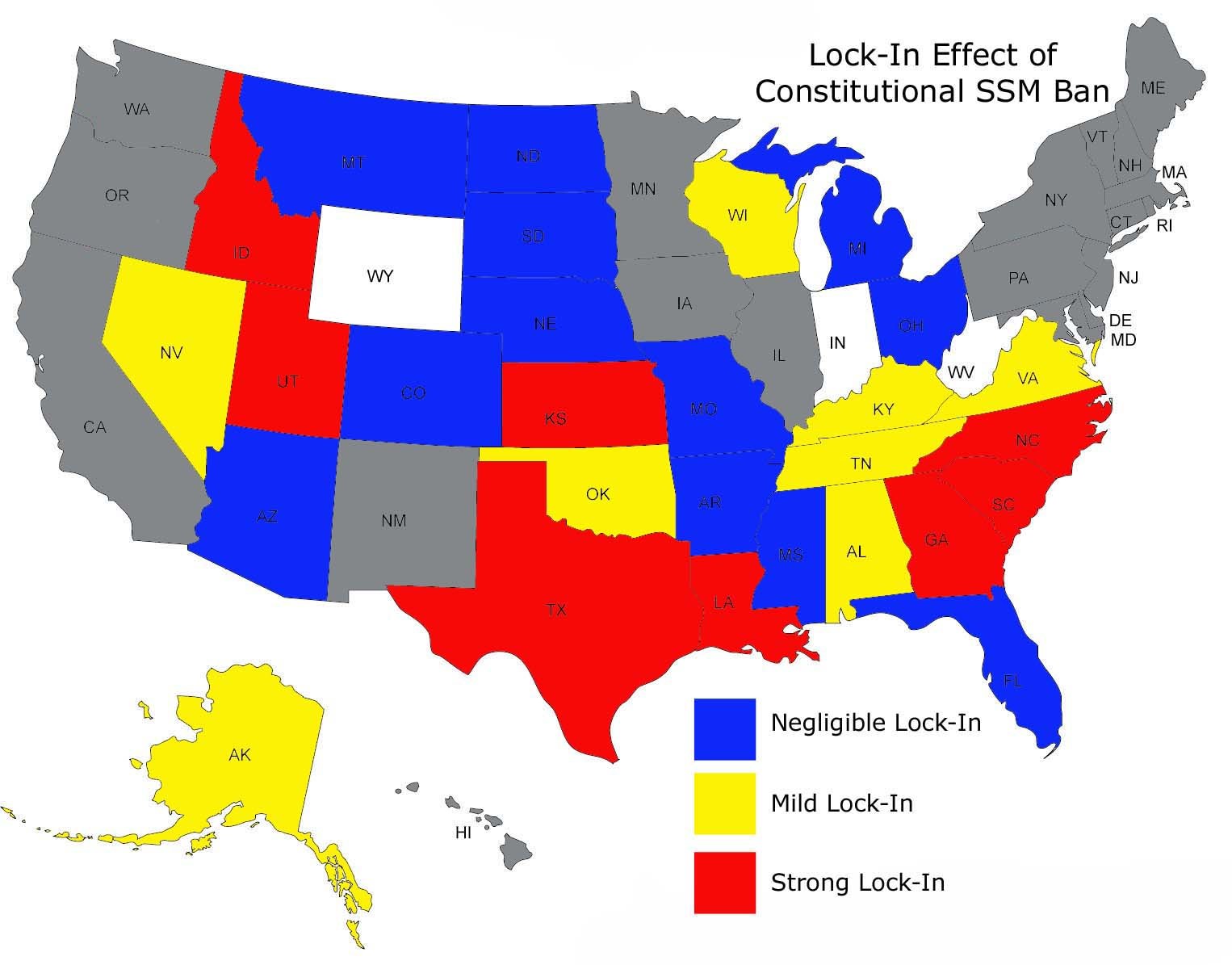 With constitutional amendments surmountable in 20 of the 28 states, the shift in public support for same-sex marriage shown in Figure 4 is likely at some point to swamp the other factors disfavoring recognition. Once support reaches levels projected by 2020, the window for bargaining will likely be closed. It may shut even sooner if courts continue to strike down bans at the rate they have been doing.

Both Sides Should Act Now

Same-sex marriage advocates should act now because, as advocates move into more difficult political terrain, they can secure marriage equality in the fastest possible time. But trading religious liberty protections will remain essential to that goal.

For opponents, acting now nets more robust religious liberty exemptions. Granted, pragmatic appeals will have little effect on some in the traditional marriage camp. But that is not the case for all. Engaging in political back and forth is possible in states across the land. Those who resist engagement will squander the “damage control” that is currently within their means, and will only have themselves to blame.

Clearly it was in advocates’ interest to bargain. Going forward, their willingness to bargain may recede over time.

Administrative Adjudication: Even Worse than it Looks?

A Time to Disobey

God, Man, and the Law according to Judge Kavanaugh