When ordinary Americans reflect at all on their political tradition, the Gettysburg Address invariably stands at the center of those thoughts. Yet there is reason to doubt whether it ought to occupy the same rarified air as the Constitution, the Declaration of Independence, the Federalist, or other celebrated documents in American history. The Gettysburg Address has displaced these other works from their centrality in the American mind, but it shouldn’t. 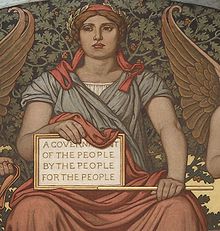 Before elaborating, let me be clear about what I am not saying. I am not criticizing Lincoln’s oratorical power. When I hear the clauses and cadence of the Gettysburg Address, I am moved for many of the same reasons as my fellow Americans. Neither do I wish to criticize either Lincoln’s prudence or the moral character of his presidential actions. These tasks are likely better left in the more capable hands of moral philosophers and theologians. But I do wish to reflect on the place of this brief address in American lives today and to question whether it ought to be central to Americans’ self-understanding.

Lincoln begins by situating his address in American history. His touchstone is, famously, the Declaration of Independence. For him, it is the point of origin for the United States and he takes from this, and from a particular reading of that Declaration, a new norm for what it means to be an American.

“Four score and seven years ago,” according to Lincoln, something of world-historic moment happened: A group of men, without being coerced (“conceived in liberty”), decided to start something new. They set out to rid themselves of their previous political tradition, or, if we are to take them at their words, they sought to preserve what they could of their political system while removing what pernicious innovations could be removed. This amounted to chopping off the upper portion of the political pyramid. The only remaining elements of the British regime would be republican: representation, the rule of law, the common law, etc.

For them, King George III and the King-in-Parliament had gone astray from the political tradition that English mainlanders and American colonists alike both held dear. As late as July 1775, the Second Continental Congress was complaining only of the “late violation” of the American “birthright”. In that document, the Congress is somewhat ambiguous on whether the elements of this birthright are natural rights or whether they are more confined to the traditional common law rights of Englishmen. Absolutely clear, however, is the aim of the colonists:

Lest this declaration should disquiet the minds of our friends and fellow-subjects in any part of the empire, we assure them that we mean not to dissolve that union which has so long and so happily subsisted between us, and which we sincerely wish to see restored. — Necessity has not yet driven us into that desperate measure, or induced us to excite any other nation to war against them. — We have not raised armies with ambitious designs of separating from Great-Britain, and establishing independent states. We fight not for glory or for conquest. We exhibit to mankind the remarkable spectacle of a people attacked by unprovoked enemies, without any imputation or even suspicion of offence. They boast of their privileges and civilization, and yet proffer no milder conditions than servitude or death. (Emphasis added)

If the Declaration of Independence, or even the event that it marks, was America’s point of origin along the lines Lincoln indicates in the Gettysburg Address, one would expect that the government arising out of this newly-effected independence would back this up. Yet the Articles of Confederation were anything but a well-oiled machine designed to effect the political, economic, or any other sort of equality of men, women, blacks, whites, slaves, freemen, or any other designation. The Articles of Confederation were notoriously ineffective. They were ineffective because they did not grant the powers required to achieve even the most basic goals of national government or foreign relations. But if we are to read the Declaration of Independence, as Lincoln does, as the most significant and the normative articulation of the mission of the American people, then the members of the Second Continental Congress are either very bad about linking means and ends (since the Articles could not possibly achieve the sort of equality Lincoln and Lincolnians imagine) or we have gotten the whole picture wrong. The latter disjunct is, it seems to me, the correct one. And the error comes from the Gettysburg Address.

Let me put this another way. The national government under the Articles was so weak and held so dear the decentralization of power that these facts ought to force us to reconsider Lincoln’s interpretation of the prior document, the Declaration of Independence, and, thus, the American political tradition as a whole. The Declaration itself, once we read it carefully, seeks only to indicate that the former colonies are now “Free and Independent States,” which “have full Power to levy War, conclude Peace, contract Alliances, establish Commerce, and to do all other Acts and Things which Independent States may of right do.” Thirteen such independent states will require another dozen years before a more centralized government comes to be. And even then, it is hard to say that the limited government sketched out by the framers could achieve the goals Lincoln seems to espouse at Gettysburg.

The old saw says that it is hard to argue with success. Lincoln’s revision of the American political tradition has certainly been successful. Most today agree that the Declaration—not as originally intended, but as interpreted by Lincoln—is the central document of our political life. When we look at ourselves, what we see is the “Lincoln-Declaration”, not the Declaration itself, nor its fit with the rest of our political development and tradition. And though this revision was not necessarily Lincoln’s idea alone, he did more to advance it than anyone else. He did most famously in the speech we remember today.

The Distinction Between Constitutional Law and Constitutive Traditions