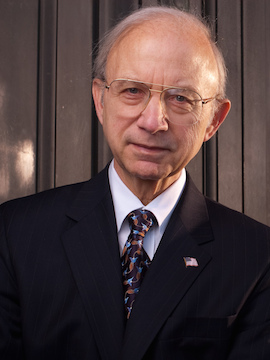 Even for those who have not been through an undergraduate academic program, the figure of the biased historian is well known. In the hands of biased historians, the past morphs into an ideological axe to grind. Methodology is the tool that forces the facts to conform to their theory, and that jettisons any stray facts that don’t fit.

But this was not always so. Once upon a time, there were historians whose intellectual probity led them to follow the evidence no matter where it led, even if it damaged their own “side.” Professor Allen Weinstein belonged to this almost extinct group. Weinstein, who taught at Smith College, Georgetown, and Boston University, and who was for three years the National Archivist in Washington, died last week at 77.

Never was Weinstein’s integrity more on display than when he wrote what many consider the seminal study of the Alger Hiss case.

Hiss was a lawyer and State Department official accused by journalist Whittaker Chambers of being part of Chambers’ communist spy ring during the 1930s. Even after Chambers produced State Department documents in Hiss’s handwriting and others typed by a machine Hiss owned, and after Hiss’s conviction for perjury in 1950, Chambers’ former comrade spent the remainder of his long life denying his acts of espionage.

Today the consensus among scholars (even the anti-anti-communist historian Ellen Schrecker) is that Hiss was a Soviet spy. Such was not the case in the 1970s, when Weinstein began delving into a mountain of previously classified FBI files relating to Alger Hiss. At the time, the latter was riding high. Watergate and the downfall of Richard Nixon, who had helped expose him in the late 1940s, allowed Hiss to cast himself as the disgraced President’s “first victim.” That era’s intellectual elite, in East Coast journals and West Coast entertainment circles, celebrated Old Leftists as merely New Dealers in a hurry and First Amendment defenders, which lent Hiss the status of martyr and hero.

Weinstein, who basically shared that elite’s views, originally wanted to exonerate Hiss. It was with this purpose in mind that he demanded release of the files under the Freedom of Information Act. (They numbered some 30,000 pages.) Aware of this quest, Alger Hiss granted Weinstein six interviews and access to the records of his defense attorneys.

Absorbing that mass of new information and still hewing the historiography of the pro-Hiss group wouldn’t exactly have been easy, but an ideologue would no doubt have managed. Weinstein, however, was above all a historian. He was courageous enough to buck the cultural tide. Canvassing the FBI files, he discovered that Hiss lied to and misdirected the FBI in its search for his Woodstock typewriter that would prove that he—or more likely his wife, an equally committed communist—reproduced word for word the State Department documents Hiss brought home from work, for transmission to Moscow.

Weinstein interviewed the writer and former communist Josephine Herbst, who knew through her husband, another cell member, that Hiss had been involved in underground work in the 1930s. He also uncovered that Hiss’s original defense lawyer, Edward McLean, withdrew his support of Hiss because he felt that his client had not been honest with him.

Although highly praised by Republicans and Democrats from William F. Buckley to Arthur Schlesinger, Jr., Weinstein and his landmark book, Perjury (1978), were targeted by the defenders of Hiss. They called him, as expected, a McCarthyite, a sloppy historian, and an opinion trustee of those unacquainted with the case. Victor Navasky of The Nation magazine even staged a limited public relations victory over Weinstein by getting permission from the historian to examine his notes. Weinstein, recognizing that this was merely theater, withdrew the offer.

Still, Perjury, to borrow a Marxist metaphor, derailed the Hiss history train speeding him toward vindication. There were of course a few more attempts to recapture the glory days of the 1970s. In 1992, a Russian historian, Dmitri Volkogonov, asserted that he found no evidence that Hiss spied for the Soviet Union. In the months ahead, he would back away from this claim, admitting that the Hiss people pressured him “to say things of which I was not fully convinced.” He disclosed that he had only spent two days “swallowing dust” in the archives of Soviet foreign intelligence (the KGB). Lengthier study of those archives, and the ones kept by Soviet military intelligence (the GRU, the agency that ran Hiss), would have located damning evidence about Hiss.

Since 1978, the documents have kept coming, and they confirm Weinstein. One of the Venona decryptions (cable traffic between Moscow and Soviet agents in the United States during World War II) confirmed an agent codenamed “Ales” who perfectly fit the background of Hiss. Another cable mentioned him by name, although the rest of it was indecipherable. Moreover, the release of the 1949 Hungarian secret police interrogation of spy and defector Noel Field revealed that he told them his friend Alger Hiss did indeed spy for the Soviet Union. Lastly, the former KGB agent Alexander Vassiliev copied out the most damning document of all, for it conclusively identified Hiss as a Soviet spy by using his real name: The chief Russian spy stationed in Washington, Anatoly Gorsky, in a December 1948 internal damage assessment of KGB and GRU agents, listed Alger Hiss as one whose cover was in danger of being blown.

For all that, Hiss has not fully fallen in the estimation of the bicoastal elites. Neither the New York Times nor the Washington Post, in their obituaries of the distinguished historian Allen Weinstein, outright said that Hiss was lying in proclaiming his innocence.

With his willingness to question, and most important his ability to change his mind, Weinstein is a figure for our times. He is proof that once upon a time an academic was not a political shill.

The Right after Fusionism, Part 1: Whittaker Chambers and the Nationalist Temptation

The moral formation upon which markets depend is always connected to local loyalties, but this doesn't mean we should turn to nationalism.

The Bolshevik takeover in the so-called October Revolution sparked a civil war in Russia that ended in 1922 with a Bolshevik victory and the establishment of the Union of Soviet Socialist Republics.