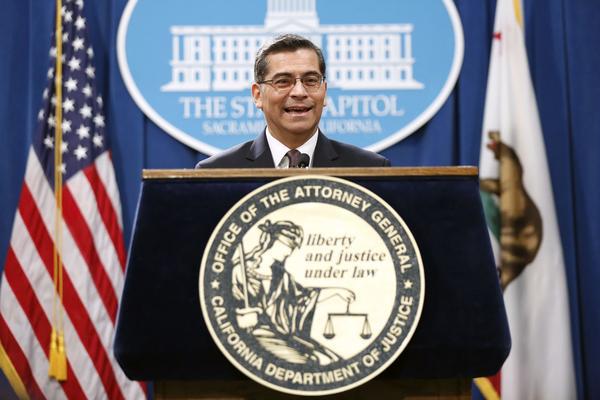 A few days after Donald Trump’s inauguration on the opposite coast, Xavier Becerra was sworn in as California’s attorney general. Becerra, who had accepted Governor Brown’s offer to replace now-U.S. Senator Kamala Harris, was fresh from Capitol Hill himself, having served in the U.S. House of Representatives since 1993 and rising through the ranks of the Democratic leadership. It might be considered unusual to trade being a mover and shaker in Washington for service in a non-gubernatorial state position. But Becerra understood that being a state AG nowadays affords a prominent voice in national politics. He has since vowed to challenge President Trump at every opportunity, which apparently has already paid dividends for his political future.

Becerra is not alone, of course. Several other Democratic AGs have gone on the offensive against Trump, throwing up major hurdles for the administration in its first 100 days in office. Several AGs challenged both of President Trump’s travel bans, winning national injunctions that effectively shut down (at least for now) one of his signature early policies. They have also supported several municipalities’ successful efforts to enjoin the federal government’s crackdown on “sanctuary cities.” (Though, as Michael Greve points out, it’s not so clear what the feds’ policy is yet on this matter, despite the district court judge’s seeming certainty). Immigration has been the main area of active litigation so far, but liberal AGs are gearing up to challenge the administration on the environment, consumer protection, health care, education, and, well, just about everything.

In a sense, this is continuing a longer trend of AG involvement in national politics, with now-familiar partisan coalitions of attorneys general challenging administrations of the opposite party. Republican AGs successfully blocked Obama-era policies including the Clean Power Plan and “deferred action” immigration programs, with Democratic AGs trying to help the Obama White House. Now the partisan coalitions are squaring off in the same way with respect to Obama’s Republican successor.

It’s tempting to say, so what? It’s no surprise that Democrats go after Republican administrations and vice versa. It may even be a good thing that liberal AGs are seeking to extend federalism-related limits on federal power that the Supreme Court adopted in cases such as Printz v. United States (1997) and NFIB v. Sebelius (2012). But it is important to keep a couple of things in mind.

First, the AGs’ escalating attempts to challenge practically everything has led to the continued narrowing of longstanding legal doctrines limiting courts’ involvement in political questions. (Yes, yes, that ship has sailed—but things have gotten worse). Many of the AG challenges during the Obama era and into the Trump presidency have successfully pushed theories of expansive state standing that essentially convert attorneys general into class-action attorneys representing a variety of interests. This has been enabled in part by the Supreme Court’s holding in Massachusetts v. EPA (2007) that states are entitled to “special solicitude” in the Court’s standing analysis.

The Court insisted at the time that this didn’t change basic standing requirements, which require that concrete injuries be traced to the defendant, and that the courts can do something about them. Don’t believe this assurance; the AGs certainly haven’t. Since Massachusetts, they have relied upon the “special solicitude” standard to make a variety of claims about harms that their states or residents have allegedly suffered because of federal action. Republican AGs relied on this relaxed standard to challenge Obama’s immigration policies—arguing, among other things, that the states would incur significant costs in issuing driver’s licenses to beneficiaries of the  Obama deferred action programs.[1] (This despite the fact that issuing such licenses is a state choice and not a federal requirement.) The lower courts bought these arguments and blocked the programs, and their reasoning relied heavily on the special solicitude standard.

With a Republican now in the Oval Office, Democratic attorneys general have taken standing claims to another level. In the lawsuits challenging Trump’s travel ban, the AGs claimed to be bringing the suits on behalf of a wide range of interests beyond their formal clients (their respective state governments).

The complaint issued by New York Attorney General Eric Schneiderman, for example, stated that he was bringing the suit on behalf of New York’s educational institutions and hospitals, even private institutions (like New York University) that do not have a direct connection to the state.[2] He also said the order would “impede life-saving medical research” because it would potentially prevent two Iranian researchers at Cornell University from attending international conferences.[3] Hawaii’s AG, Doug Chin, cited the special solicitude standard in claiming that the state’s sovereign interests were damaged because the order “subjects a portion of Hawaii’s population to discrimination and marginalization while denying all residents of the State the benefits of a pluralistic and inclusive society.”[4] Whatever one thinks of the substantive claims here, these are thin reeds on which to base an argument that the state’s sovereign interests are implicated.

That the judiciary has been accepting these arguments illustrates how far we’ve moved away from the still (technically) good law of Massachusetts v. Mellon (1923). There, the Supreme Court rejected Massachusetts’ claim that the state itself was harmed because of the federal government’s alleged violation of one of its citizen’s constitutional rights. As the unanimous majority held, “it is no part of [a state’s] duty or power to enforce [its citizens’] rights in respect of their relations with the Federal Government.”[5]

Yet this is precisely what the attorneys general have done, acting increasingly as representatives of broad ranges of groups and individuals who have only tenuous ties to the state’s sovereign interests. Add to this the willingness of federal district courts to grant AGs nationwide injunctions—which Republican AGs took advantage of in several cases, as have Democratic AGs in the recent travel ban and “sanctuary cities” litigation—and you have the recipe for a lot more AG activism in the future.

The second thing to keep in mind about this rising tide of activism is that, as I’ve argued before at Law and Liberty, it is just as (indeed, more) suited to serve pro-regulatory goals. In part this is because AGs can block federal deregulatory efforts just as they can block efforts to expand federal regulation. But they have discovered in addition that seeking new regulation of private corporations is also a fruitful strategy, particularly in the face of Congress’s decision not to act. Since using the threat of lawsuits to achieve a massive tobacco settlement in the late 1990s—a settlement that essentially cartelized the entire tobacco industry—attorneys general have used similar strategies to expand the regulatory state in the pharmaceutical, financial, and energy sectors, among others. This use of litigation—unlike lawsuits against the federal government, which both conservatives and liberals have used—ratchets in only one direction: toward more regulation.

Consider one ongoing drama that began in the last year of the Obama administration and has  escalated in the first months of the Trump administration. Back in March of 2016, a group of liberal AGs announced a new “AGs United for Clean Power” initiative that sought heavier regulations to fight climate change. Flanked by former Vice President Al Gore, the AGs announced that they were working together on “investigations into whether fossil fuel companies misled investors and the public on the impact of climate change on their businesses.” This tactic was the brainchild of environmental advocacy groups, who met with several sympathetic AGs to pitch their strategy.

Schneiderman of New York, and his Massachusetts colleague, Attorney General Maura Healey,  took them up on it, issuing subpoenas to ExxonMobil demanding millions of documents concerning the company’s research on climate change. ExxonMobil balked at the demands, filing a suit arguing that the AGs were abusing their power and violating the company’s free speech rights. Congress even got involved, with the chair of the House Science Committee issuing subpoenas demanding information about the AGs’ investigation. (Schneiderman and Healey ignored these subpoenas.) Despite this pushback and the investigation’s questionable legal basis, the AGs have just received favorable judicial rulings that ensure that this open-ended probe into ExxonMobil’s climate stances will continue indefinitely.[6]

This basic strategy of regulation-through-AG-litigation will only become more prevalent as the new administration rolls back the previous administration’s regulations. Only a few days after President Trump entered office, for example, several Democratic AGs sought to intervene in a federal case against a major for-profit college accreditor.[7] The case was part of the Obama Justice Department’s attempts to place stricter regulations on the for-profit higher education industry. AGs hadn’t previously been involved in this lawsuit, but their intervention ensured that it would remain alive in case the Trump Justice Department sought to drop it. You can be sure that similar multistate AGs lawsuits will seek to reregulate other industries as well if the Trump administration rolls back regulations—all in the name of “filling gaps” in federal regulation.

In short, what we’ve seen already in the era of Trump are AGs redoubling their efforts to insert themselves into issues of national policy. This will continue as Trump’s pledges to cut federal regulations (presumably) become reality. You’ll hear a lot about how this is to protect federalism, even when the AGs are seeking an expansion of the national administrative state against conservative attempts to contract it. Remember: just because a state actor does something to push back against federal policies doesn’t make it “federalism” in any meaningful, constitutional sense.

The Supreme Court has replaced the Constitution’s principle of the individual’s right to vote with a right to equal representation for minority groups. This post investigates the central moments of this shift in doctrine and practice.

Will Indiana Zag from the Common Core?

Conservatives Should Not Lump Classical Liberals with Modern Liberals

It is modern liberalism, not classical liberalism, that blurs the distinction between the state and society, and that destroys ordered liberty.