In reflecting further on the issues raised by Ted McAllister’s emphasis on the American historical experience of liberty in this month’s Liberty Law Forum, I find myself returning again to consider the meaning of a particular phrase of the Declaration of Independence: “the pursuit of happiness.” I have written about this before in other places, but McAllister’s highlighting of historically lived experience, brings out the significance of this passage even further.

McAllister’s post draws attention to the many ways American self-government was connected to the American experience of voluntary association. That is an extremely important aspect of American liberty that goes far to illuminating how experience works in the selection of ideas; that is to say, of how the Americans of the revolutionary period came to articulate their experiences through the careful selection and development of available concepts. From these ideas, they fashioned a powerfully coherent intellectual framework. The filtering of ideas through experience is in fact always going on in every generation, but the Declaration presents the culmination of an instance forged in exigency, when it was absolutely critical to get that articulation just right.

The selection of the phrase, “pursuit of happiness,” has puzzled generations of scholars who have pored over innumerable sources in an effort to understand why Jefferson chose this particular turn of phrase, and why his fellow representatives accepted it. This is a complex history all by itself, but one aspect bears closer examination precisely because of McAllister’s emphasis on experience.

The flourishing of a society of freely associating individuals was already part of American historical experience well before Tocqueville wrote about it in the 1830s. It was intimately connected to American religious life and practice. All were aware of the absolutely fundamental nature of the covenantal experience and the myriad forms of American spiritual fellowship. And it was also clearly part of the history of colonial charitable endeavors, already so well represented by Franklin’s example of founding private, yet still public, though not governmental, organizations: of schools, hospitals and libraries, etc.

One set of ideas that came in for particular consideration by Americans of the time was that of the Scottish Enlightenment. Many have written about this. Perhaps one of the best discussions, though, is that of Allen Jayne’s Jefferson’s Declaration of Independence (1998), wherein many of the overstatements and misconceptions of Gary Wills are corrected. This service alone makes Jayne’s book worthy of study. 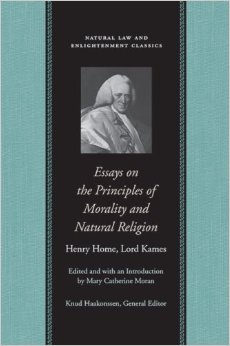 Jayne pointed to the powerful influence of Lord Kames’ Essays on the Principles of Morality and Natural Religion which originally came out in 1751. The work figured prominently in a letter by Jefferson to his Nephew Peter Carr in 1771. The essence of Kames’ argument was that humankind was peculiarly suited to society by nature—or rather by the design of nature’s God—through the existence of an in-born moral sense inducing us to enter into association.

There is, however, a very interesting passage which no one, as far as I am aware, has singled out for consideration with respect to the particular origins of the phrase “the pursuit of happiness.”

At the end of his long work, Kames presented an extended prayer or hymn of praise to the Creator. Because it illustrates just how closely American experience and the ideas to which Americans were drawn, matched up, it is worth quoting at some length:

For, do not all these wonders, O Eternal Mind, Sovereign Architect of all, form a hymn to thy praise! If in the dead inanimate works of nature, thou art seen; if in the verdure of the fields and the azure of the skies, the ignorant rustic admire thy creative power; how blind must that man be, who, contemplating his living structure, his moral frame, discerns not thy forming hand? What various and complicated machinery is here! and regulated with what exquisite art! While man pursues happiness as his chief aim, thou bendest self-love into the social direction. Thou infusest the generous principle, which makes him feel for sorrows not his own: nor feels he only, but, strange indeed! takes delight in rushing into foreign misery; and with pleasure goes to drop the painful tear over real or imaginary wo. Thy divine hand thus formed the connecting tye, and by sympathy linked man to man; that nothing might be solitary in thy world, but all tend toward mutual association.

I have pointed to this passage in other places (Harmonizing Sentiments and CATO’s Encyclopedia of Libertarianism), but here the origins of Kames’ prayer bears closer examination.

Kames gave no source. Most likely he wished to spare the author any trouble that might come from association with his book’s more controversial interpretations, but the author was none other than the prominent Presbyterian minister of his day, Hugh Blair. In the note to the 1779 edition republished by Liberty Fund, this fact was brought forth by the editor who observed that Blair had long defended Kames against the charges of Heresy leveled by the more stringent Calvinists in his Kirk.

To my mind, this quote says a great deal about the reasons why Jefferson chose the wording he did, and why his colleagues endorsed the selection. It spoke to their actual historical experience. Happiness was a term quite common in seventeenth-century civil discourse at the time, and a very common part of American sermons and essays as well. George Mason had likely selected the Virginia Bill of Rights’ wording of “pursuing and obtaining happiness and safety.” Jefferson clearly had all of this on his mind.

But having before us evidence that Jefferson had also carefully read some five years earlier Kames’ Essays, I cannot help but think that Blair’s hymn played a critical role in guiding Jefferson’s pen to make the elegantly succinct statement that he did. That it so nicely affirmed the American experience of a thriving, voluntary associational order of liberty, where each “pursues happiness” and “all tend toward mutual association,” goes a long way to explaining why his fellow representatives in Congress endorsed the construction. And for our purposes now, it underscores the very tight connection between ideas and lived experience.

Why has Thomas Jefferson become the progressives' favorite founder?

God in the Declaration

The theology limned in the Declaration is very much a political theology, what one could call, in hindsight, fledgling America’s civil religion.

A Fistful of Federalism, Part II