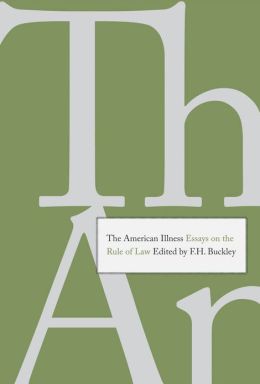 Frank Buckley is the editor of a new collection of essays entitled The American Illness: Essays on the Rule of Law, which features great scholars in business law, class actions, securities, regulatory law, among other subjects, who look into the ways America has departed from its pivotal commitment to the rule of law. The essays are oriented around the idea that America may be alone among western nations in the variety of ways it is descending from the rule of law. On this point, Buckley opens by suggesting that such a departure might be directly tied to our lagging economic recovery:

More recently, America itself has suffered from an economic decline, and this book asks . . . whether a decline in the rule of law has contributed to this. America sends experts to lecture people in other countries about the importance of the rule of law, but in doing so, do we fail to recognize the beam in our own eye?

Buckley’s introductory essay wonders aloud if America’s lowered rankings among multinational corporation CEOs as a place to do business is due to a hubris that doesn’t consider America’s inevitable relative decline in a globalized market. Not only are we not getting our house in order, we don’t even see its messiness. The litigation and regulatory costs are cited by many business leaders as a deterrent from bringing work to the US. Public opinion focuses, with great stupidity, on the bad effects of outsourcing jobs, but never contemplates the intersection of an overlawyered, overregulated country with multiple access points for bureaucrats and special interests to interfere with business decisions and the subsequent hit to growth such interference causes.

Significantly, America ranks close to dead last among western nations in Transparency International’s 2011 Corruption Perception Index, which surveys business leaders about their perceptions about bribes, kickbacks, attempts to curb such behavior, etc. Of course, it gets worse, if you take into account lobbying in DC. As Buckley notes, “No other country has anything like the number of American lobbyists who load up legislation with interest group bargains.”

Litigation costs are huge in America in both absolute and relative terms. One of the book’s essays on litigiousness finds “U.S. litigation costs were between four and nine times higher than non-U.S. costs (as a percentage of revenue).” These costs are real, correlation isn’t causation, but litigation expenses surely factor into the 864,000 jobs U.S. multinationals shed in America in the last decade, which don’t seem to be returning to American shores, Buckley notes. “U.S. multinationals increased employment overseas by 2.9 million. Similarly, the U.S. share of global foreign direct investment declined from 31 percent in 1980 to 13 percent in 2006.”

Also of interest in this book is its comparative law focus or its contribution to “the nascent field of comparative-law-as-if-the-economy-mattered.” Thus many of the essays delve into “a country’s private law regime [that] imposes relatively high costs on businesses and gives them an incentive to relocate elsewhere—and that is the subject of this book.”

Particularly appealing to me is the book’s last essay by Francis Fukuyama on the rule of law in China. Buckley notes that the rule of law should be thought of in two ways: thin and thick. Thin means you can do business in a country without any worry; however, you might not want to live there because basic political rights are not protected. China might be an example of the thin rule of law. Fukuyama’s piece goes beyond this so-called Beijing Consensus (“we’ll make you rich, just don’t bother asking for democracy”) and explores another avenue, “one of a quiet return to earth.”

I did wonder here, though, about a major aspect of the Chinese business model which is its ripping off the intellectual property of foreign companies who do business in China. This further leads me to doubt China’s ability to actually compete in the commerce of high-level entrepreneurship and the creative class that powers it. Does China have this social, cultural, legal and political commitment to fostering such a group? If not, where does its future growth lie? Its export model has picked the low-hanging fruit and rising labor costs, among other factors, seem to spell its decline. New gears will have to be used to sustain its high levels of growth. This seems to be what Fukuyama doubts about China. It has peaked.

Fukuyama argues that China’s commitment to the rule of law will not prove durable because it lacks the religious and cultural capital of the West that undergirds our support of the rule of law. But do we still have such capital? Growth will slow. Moreover, who is to say that a new class of leaders in China will not impose a different vision of Chinese nationalism, one that departs from its state capitalist model? On this point, state capitalism might undermine itself. In a sense, I suppose this last question is also the question for America

The AUMF: A Hydra in Search of a Hercules

People Against the American Way

The Challenge of Limited Local Government

Classical liberals love to talk about limiting government power, but often forget to attend to doing this at the local level.