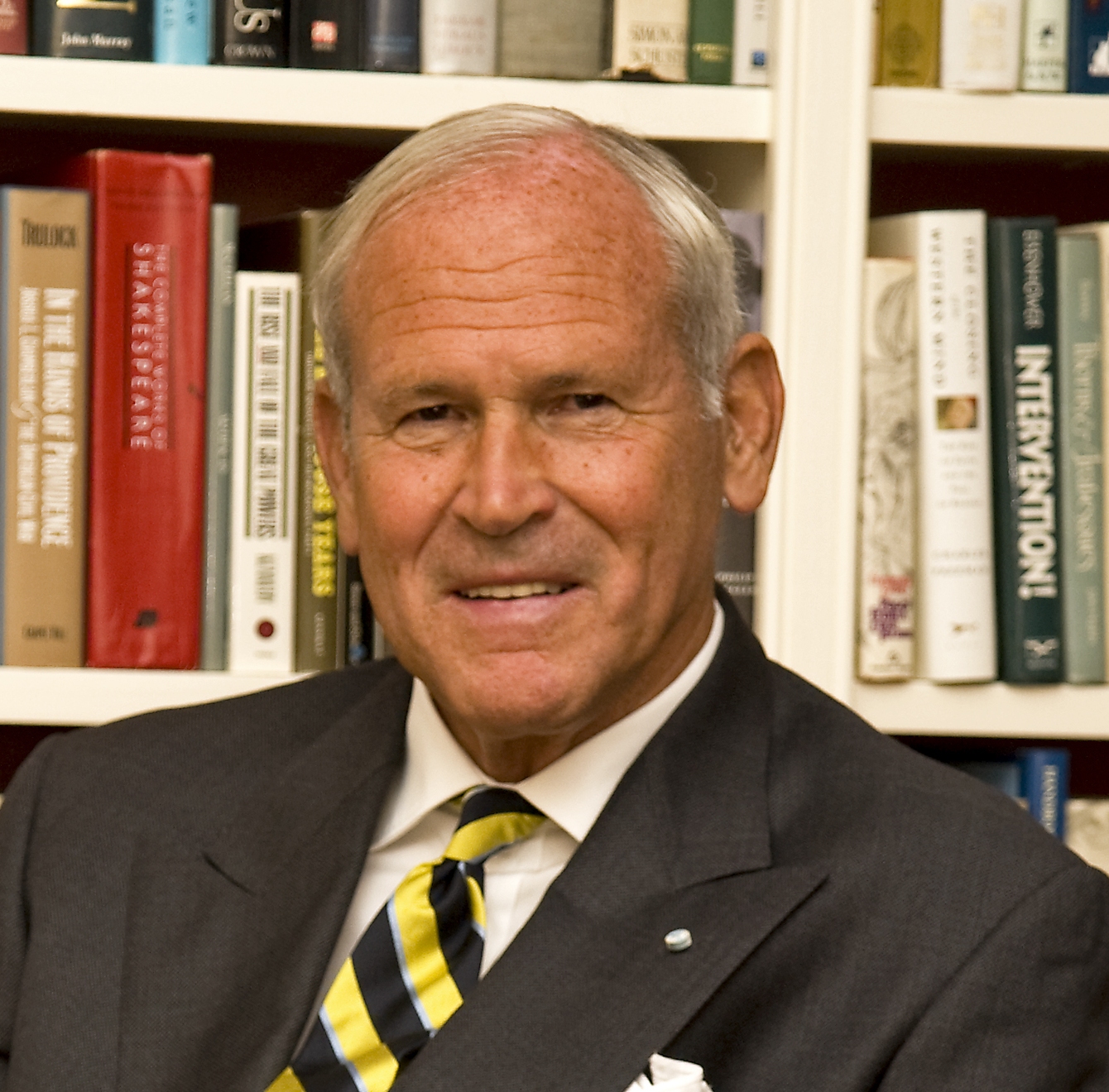 Published over a decade ago, Josiah Bunting III’s An Education for Our Time presents the plan of dying, septuagenarian billionaire John Adams, a descendant of those Adamses, for a new institution of higher learning to be built in eastern Wyoming. The broad goal is to provide a unique liberal education. In addition to studying classics, serving abroad, and mastering the outdoors, and classical and modern foreign language requirements, the College will also edify the character of its students through emulation by reading great biographies and engaging in deep historical learning that will form 1/3 of the curriculum.

There is no tuition. The school will operate as best it can free of any regulations from federal or state governments. SAT scores will not be considered for admissions. Grades will matter, but of greatest significance is character, or rather, the committees in each state that evaluate applicants will look for those young men and women who have demonstrated independence by taking risks under difficult circumstances. By this, Adams wants students who have been willing to pursue the good in the face of mockery.

Adams sets forth to answer five questions that will define the College in its operations:

For mission, he states “The College’s mission is the preparation of virtuous and disinterested citizens and leaders for the Republic.” Adams believes that his country is failing, collapsing for lack of character. Souls have become so small under so many ideological weights and the ignorance of American history that the free republic increasingly looks like the leftover of a superstitious age. Consequently, he thinks the College’s graduates must be prepared to give without counting the cost, citing various religious (St. Ignatius of Loyola), classical (Cicero), and American (George Washington) authorities for this point.

Students will spend 2 of their 5 years off the demesne of the College. They will serve “internships” where they will prove themselves in menial work stateside, and then a post in a non-Western country, whose language they are fluent in, near the end of their studies. Adams intends for these opportunities to be somewhat lonely, none of the posts will flatter a resume or an ego. Instead, the student will reckon with his education, his character, amidst the circumstances he inhabits. In this, he will come to understand his own relative insignificance to the world while he simultaneously gains self-mastery and is prepared for future challenges. Bunting, I mean Adams, here implies that our current ruling class displays a selfishness and flatness in its conduct. Believing themselves cosmopolitan and above American prejudices, they really display a most droll provincialism of their class. In short, they have been educated poorly. This best explains the repeated errors of both political parties’ leaders in foreign and domestic service.

Also evident in the College’s curriculum is a rigorous commitment to physical endurance that must be earned in the outdoors on various missions, pursued individually and in groups. A student of this College must truly master the elements. Perhaps most difficult is the lack of grades, awards, merit opportunities. Students succeed in recognizing the gifts they have received and the gifts they must provide to others. Students will be evaluated at a personal level by their professors on how they understand the material, to be displayed, in many instances, in the written and spoken word.

The goal of our fading billionaire in my judgment is, seemingly, too close to Sparta, losing too much of Athens, Jerusalem, and Rome, although the influence these cities had on our Founding is also evident in his design of the school. This goes without mentioning the great contributions made by Scottish and English Enlightenment thinkers on many of our founders. Their arguments for commerce, self interest, and the virtues appropriate to a modern commercial republic, while not expressly denied or controverted by Adams, are clearly given short shrift. Likewise, arguments in The Federalist for limiting and separating power owing to man’s self interested desires clash at a certain level with the model of service that Adams articulates in the mission of the school for the “preparation of virtuous and disinterested citizens and leaders for the Republic.”

Adams, however, is clear in his view that higher education is in moral freefall. The manifest confusion this creates for republican government is ongoing. This means that an intervention of great purity in commitment will be required. The installation of a devout religious school or a national service academy will not do, something more comprehensive is needed. At a deeper level, Adams is implicitly urging us to consider that the best of liberal thought must be in touch with the foundations of the moral and religious inheritances of the West as these in turn have been shaped and incorporated by Americans. Bunting’s Adams means to start a fire that will burn where the College’s graduates take it.

We might, therefore, stay close to Adams, as we contemplate the manifest crises in American education today. Bunting is trying to articulate how education is for persons in their full capacity as relational, creative, and spiritual beings. That education must also take the regime into account and fit its students for the duties of citizenship and politics as presented to them in future circumstances.

Higher education’s problems are well known to this audience. However, the seeming nationalization of education under the Common Core State Standards also looms large and contributes to our difficulties as its consequences emerge in the coming years. Much is being made today of the increased prevalence of global trade mandating that we change our pedagogical practices. We are told that education must make students “College and Career” ready, or we fail in the global business race. This is hogwash. This latest reduction of education to a utility function that makes students “College and Career Ready” is the democratic egalitarian challenge to the vision of Bunting’s Adams.

Our country, however, is not merely an economy, just as our lives are not merely our careers but obviously go beyond these contexts. We are rational and relational beings who find our end in the Good, in beauty, truth, and the knowledge of what is real about ourselves. Of this perennial philosophy, few will disagree with this general presentation, even though we surely will disagree with specifications of that good. But that is where self-government, federalism, and the foundational principle of limited government matter greatly. That is, simply stated, the commitment of American constitutionalism. American education must take this fundamental commitment into account. If not, then our successors won’t know what to do with the gift of self government.

A comprehensive understanding of education would note that man as a rational and relational being must be tutored and prepared for those parts of his life that rise beyond and, ultimately, give shape to “college and career readiness.” The techno-vocational understanding of the ends of education, I submit, is false in its very assumptions. Our constitutional form of government builds on a profound anthropology of freedom, placing on us the responsibility to speak and act virtuously precisely because of our authentic human desires to know, love, and act according to the truth about ourselves. And this surely means that education cannot be defined materialistically by a program that can only contemplate endless divisions of labor and the consumer bounty it produces. Constitutional government demands, finally, that we place our productivity, our prosperity, and our freedom in the service of the human spirit, reconciling the enormous opportunities that these afford us with upholding the human person as more than a worker.

The more difficult practice is to act with charity and loyalty to the person, with knowledge that self government is built, ultimately, on our spiritual capacity to govern and know the truth about ourselves with others. The American citizen is a person, capable of self-government, open to the truth about his being, and the inheritor of the western constitutional tradition given to America, as affirmed by our founding documents. We need an education for this person and for this republic.

Post Collegium, Ergo Propter Collegium: On the Destruction of Higher Education in America

Congress Should Deregulate Private Universities, Not Regulate Them More

Conservatives should focus on creating the legal space for innovation in higher education, not regulate it more.

Business Education and the Humanities

To achieve reform, it will not work simply to stuff in courses that come out of the English department’s current offerings and call it a day.