The central concern of Radley Balko’s new book is what he calls “the militarization of America’s police forces.” The main symptoms of this disease are specialized SWAT teams that were formed to deal with violent emergencies but which now frequently turn “no knock” home invasions in pursuit of drug offenders and evidence into violent and frequently injurious confrontations. The blame for this overkill is shared in Balko’s account by (1) drug warriors creating legislative licenses for no-knock entry, (2) the SWAT team innovation of Daryl Gates in Los Angeles that is now a status symbol in police departments nationwide, (3) the permissive trust of constitutional courts in the motives and veracity of the cops, and (4) public willingness to tolerate excessive force as a law enforcement style against criminals. All of this is encouraged as well by federal programs to share military equipment and provide financial incentives for drug policing. 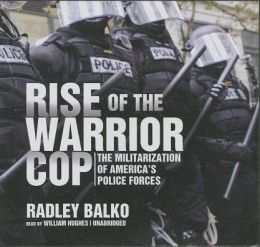 “Aggressive SWAT-style tactics are now used to raid neighborhood poker games, doctor’s offices, bars and restaurants, despite the fact that the targets of these raids pose little threat to anyone. This sort of force was once reserved as the last option to defuse a dangerous situation. It’s increasingly used as the first option to apprehend people who aren’t dangerous at all.”

The book consists of short historical summaries of policing and legal doctrine prior to the 1970s that introduce longer treatments on crime policy, the growth of SWAT and the permissive turn of the Supreme Court in search and seizure cases. Balko documents the growth of SWAT teams and the support from federal aid and incentive programs with good financial and force deployment statistics.

But the author’s main ammunition is an almost endless parade of stories of needlessly violent and frightening home invasions that almost all target innocent families. Even assuming that Balko’s point of view has shaded his description of these disasters of overkill, the mixture of SWAT team tactics and attitudes with the job of executing drug possession warrants seems inherently toxic. Balko seems to be arguing that once SWAT team equipment and ethos have a beachhead in a municipal police department, the excesses that he documents are inevitable. But why would a good police manager want to tolerate Keystone Cops with assault weapons and smoke and noise grenades? The book doesn’t tell us. Further, the author seems to believe that there has been no significant reduction in excessive force and overkill execution of warrants in recent years, but Balko’s evidence on this issue is rather thin.

The book seems also to assume that both the style and aggressiveness of SWAT teams is representative of police generally but does not provide any clear data on patterns of excessive force in municipal policing or estimates of what percentage of police officers are part of the SWAT phenomenon or its equivalents. Do the best and the brightest young police officers line up for service on SWAT teams in Chicago or New York? Is serving drug warrants the fast track to promotion in large urban police forces these days? The author correctly complains that accurate and comprehensive data on police violence isn’t available, but then he doesn’t use some of the significant statistics that are maintained to test his theories.

Because Balko correctly asserts that killings by police are in all but outrageous circumstances classified as “justified,” that makes the annual rate of justified killings by police, a statistic reported by the FBI, into a reliable measure of deadly force trends attributable to police in the United States. The number of annual reported justified police killing varies from 300 to 459 in the 36 years after 1975 for which data are available and there are no clear trends over time. The annual average of killings by police for the first five years of the series was 390 (in 1976–80) compared to an average of 368 killings a year after 2000. This is a high volume of killings for police in a developed nation but it still suggests there are big differences between Baltimore and Baghdad in 2013. The rate of killings of civilians per 100,000 population is down about 35% in the 30 years after 1980. But the rate at which police are killed has dropped much faster, in no small part due to the proliferation of Kelvar vests. Since police are safer, the modest drop in killings by the police is something of a disappointment in recent decades. There is no doubt that both the conduct and attitudes of urban police present problems, but there is also no evidence that urban police are getting much worse in the 21st century.

And one reason why police behavior is not deteriorating in the United States is a changing of the guard in the top ranks of police management. Daryl Gates of Los Angeles may be Radley Balko’s poster boy for SWAT team excesses in decades past, but Mr. Gates is long gone as chief of police, replaced by the computer-driven administration of Bill Bratton and Charlie Beck. Effective management has improved both the crime fighting capacity of the force and its reputation for community relations and control of force. Nobody misses Daryl Gates. In New York City, where the book complains about the high volume of drug raids, the number of cops in specialized narcotic squads is down significantly since 1999.

The strength of Radley Balko’s book is its sustained focus on the proliferation of SWAT tactics and a culture that encourages excessive force. He is also an effective reader and critic of the diminishing protection the Supreme Court provides to citizens when police search. The book is a readable and interesting popular history of police excess, but it suffers from a lack of understanding about how effective police management controls can suppress gratuitous police violence.

If citizens abandon their “us versus them” toleration of police violence, then the quality controls that effective management can engineer can work quickly and well. That the crazy excesses that Radley Balko recounts are far from impossible to control makes their continued toleration even more inexcusable.

The Constitution and the Regulatory State’s Special Militias

The Shifting Politics of Drug Control