The American Enterprise Institute’s Arthur Brooks is probably the most captivating American intellectual leader today on the right. He wows conservative audiences and even elicited a kind word about capitalism from the Dalai Lama, who considers himself a Marxist!

In an excellent article for Commentary magazine, with the Biblical title “Be Open-handed Toward Your Brothers,” Brooks asks about the status of the U.S. five years into the progressive rule of Barack Obama and his promises to lift up the poor, end inequality, and make the rich pay for it. Brooks demonstrates that the rich have never done better, noting a study showing that 95 percent of the Obama recovery gains have gone to the top one percent of earners. “At the same time the poor have become more desperate” and a lower share of the population is in the workforce than any time in the last 30 years. Obama’s policies have been a disaster for the poor. But what do conservatives offer in return, Brooks asks? He replies that they merely complain about these circumstances. Brooks demands a new type of social justice commitment by the right as the only decent response.

Given the present discontent, his message is fresh and engaging. Brooks’ solution is in three parts. What is required is: 1) a personal moral transformation by the nation but especially the poor toward the known values that lead to success–work, family, community and faith; 2) the establishment of a rational, limited, material safety net for the poor that leads to independence, such as an Earned Income Tax Credit (EITC) for low-income workers rather than dependency-creating welfare; and 3) providing everyone the opportunity for a job through universal education based on vouchers and charter schools rather than state monopoly, within a market economic system that will provide work for all when not smothered by government regulation.

To those conservatives and libertarians who object that this sounds too much like the welfare state they have been fighting all these years, Brooks asks what person made the following statement, “Was it Franklin Roosevelt, John Rawls, Ralph Nader? Not by a longshot.”

There is no reason why, in a society that has reached the general level of wealth ours has, the first kind of security should not be guaranteed to all without endangering general freedom; that is: some minimum of food, shelter, and clothing, sufficient to preserve health. Nor is there any reason why the state should not help to organize a comprehensive system of social insurance in providing for those common hazards of life against which few can make adequate provision.

This was Friedrich Hayek in his seminal free-market text The Road to Serfdom! So that should be enough to answer Brooks’ conservative critics coming from the man who did more than anyone else to revive limited-government, libertarian-conservatism in modern times.

What Brooks did not say was that Hayek’s major concern with the welfare state was its reliance on central planning to do the impossible, that is, to know and regulate more than the state’s limited mechanisms could possibly control given the enormous complexity of the modern social world. 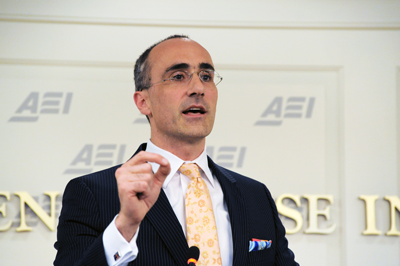 Brooks’ Commentary piece might seem to assume that some national three-part program can fix everything. It is not clear how the “moral transformation” would take place but any decent progressive could argue that such is the purpose of the existing plethora of programs (obviously with different definitions of faith and family). Of course, any limited government reformer is trapped in the conundrum of offering a competing comprehensive plan because existing national policies of enormous scope are a reality and must be taken as the starting point. This reality led Hayek (and Milton Friedman and Brooks) to offer such solutions as a national negative income tax rather than job-killing minimum wages.

But where Hayek went further—especially in his concluding Law, Legislation and Liberty—was to propose having the rest of the social safety net assigned to regional and local governments and private voluntary charity. Brooks correctly notes that present charitable giving alone could only raise the annual income of each poor individual by $847, but that EITC in conjunction with state and local governments and private charitable organizations could provide the necessary funds here.

Indeed, as Jim Maney has noted citing 30 welfare experiments, negative income taxes only seem to be effective with work requirements and these would best be local. What is missing in Brooks’ article (although not fully in his other writings) is the idea of the residual not being a national responsibility. EITC and its cousins are rational, simple monetary means to solve a monetary problem, lack of money. As Brooks’ emphasis on moral transformation shows, money alone will not do. The only alternative solutions are state and local governments and especially voluntary associations.

What is most needed to reform the welfare state is to minimize its accompanying, suffocating bureaucracy. As Hayek’s teacher Ludwig von Mises demonstrated in his classic, Bureaucracy, it is the statist’s answer to the market. Besides its cumbersome nature, bureaucracy’s fatal flaw is that it has no alternative to the price system to communicate through its layers to understand popular demands. Resulting inefficiency is monumental.

The Mercatus Center’s Veronique de Rugy and Jason Fichtner demonstrate that the Federal government wastes $100 billion per year on welfare programs, headed by Medicare at $29 billion and Medicaid at $19 billion. Number three at $12 billion, however, is EITC with a much higher error rate relative to total expenditure. Even the more rational programs in theory are difficult to administer in practice given the complexities involved. The EITC struggles with assessing eligibility of participants from a far, far away Washington.

The nation’s top public administration expert, Professor Paul Light of New York University, concludes that Federal bureaucracy is so dense today that the national government is no longer able to faithfully execute its laws. Layers of bureaucracy and the resulting inability to communicate are further complicated by public sector unionism. Democratic administrations cannot afford to alienate these allies and Republicans fear their prodigious fundraising ability. Reform is fought at every stage, even when successful it does not last. Under these conditions, no one should be surprised by the Obamacare administrative morass from its kickoff to its almost daily exceptions and exclusions. It is a lesson in how national bureaucracy actually operates.

As serious students of bureaucracy like James Q. Wilson have noted, the only way bureaucracy can work even marginally well is to keep the task simple. Nationalized Social Security works reasonably well administratively (although deeply in the red financially) because the same person contributes for many years and once on the program gets a check and stays there until he dies. It is simple. But most aspects of social life are complex. As political scientist Vincent Ostrom has demonstrated, only decentralization can break tasks down to manageable elements that can be understood and remedied by people closest to the problem. As economist Charles Tiebout has shown, the resulting market of governments at local levels produces choice and easy exit to replicate many of the benefits of a free economic market. This was Hayek’s view too.

Brooks’ program is a compelling step toward a rational conservative case for transcending the failed welfare state. All that is needed in addition is an explicit resolve to take most of current bureaucratized welfare back to where it can be handled with true brotherly openhandedness, by real brothers and sisters at the local and private levels where they actually can know and care about those they are assisting.

When the Justices Talk about the Constitution outside the Court

How Did Our Politics Go Insane?

Progressive faith in government ignores the abuses of power that people with power commit.