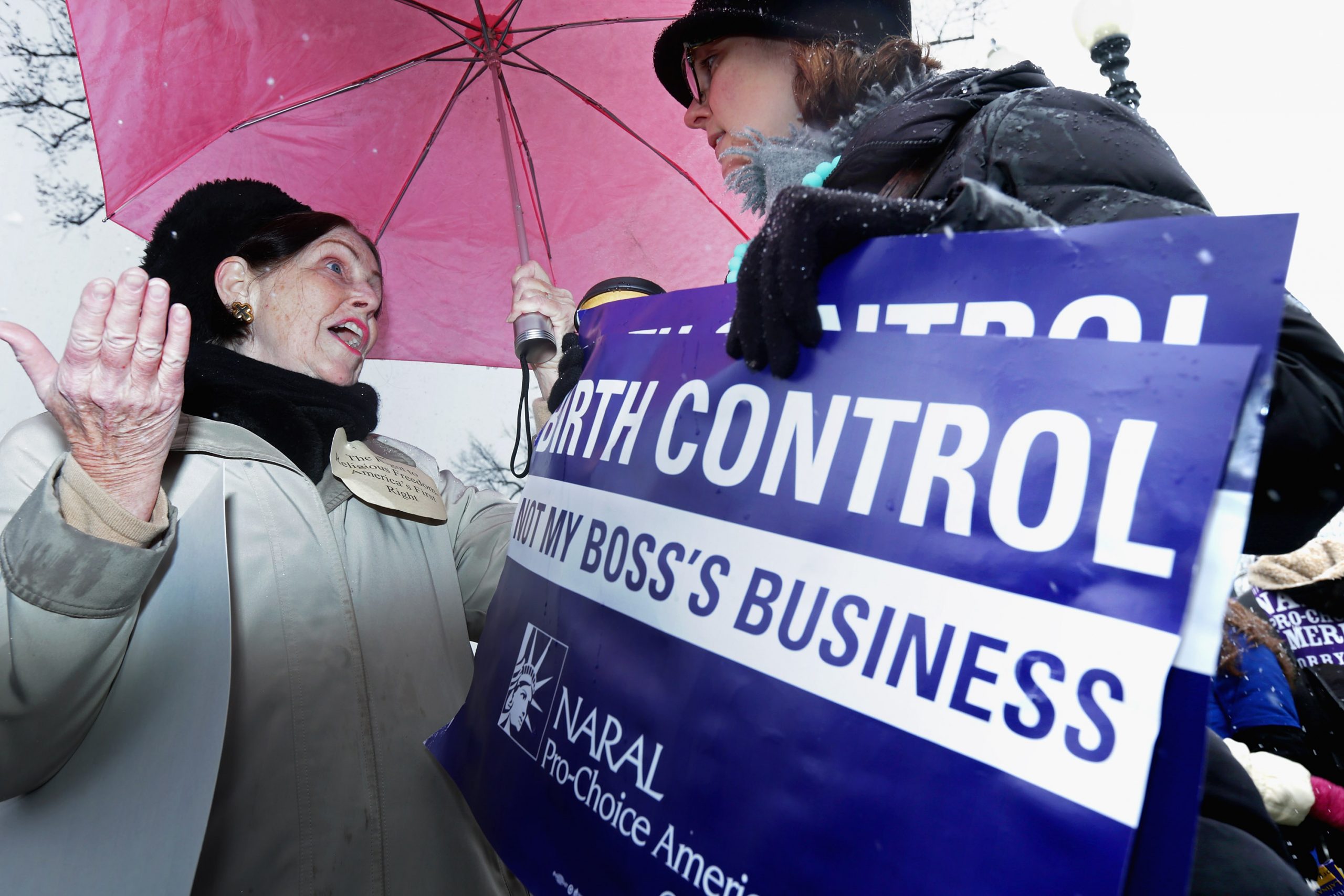 The Hobby Lobby case, “one of most publicized controversies in decades involving a religious claim,” in the words of Columbia law professor Kent Greenawalt, prevented the Obama administration from mandating under the Affordable Care Act (ACA) that all employers cover all contraceptives approved by the Food and Drug Administration—even those drugs and devices that objecting employers believe “cause the demise of an already conceived but not-yet-attached human embryo.”

The U.S. Supreme Court held that the Religious Freedom Restoration Act (RFRA) prohibits the government from forcing closely held, family-owned corporations to cover such drugs and devices if a less restrictive means is available. One less restrictive means available to the administration, the Court noted, was to extend to such corporations the significant concessions the Obama administration already made for objecting, religious non-profits. This is a step the administration is now taking.

It was a high-profile win for religious objectors. Nonetheless, the highest percentage of Americans in a decade, according to the Pew Research Center, see religion’s influence as waning. How can this be?

The answer may be Hobby Lobby itself. Professor Greenawalt predicted shortly after the decision’s release that it would “intensify resistance to religious exemptions in general.” Indeed. Since Hobby Lobby, several ongoing attempts to balance civil rights with religious liberty have collapsed, as a wariness toward religious exemptions descends on Washington and state legislatures.

Mere days after the Court’s ruling was announced, the American Civil Liberties Union and Lambda Legal publicly withdrew their support for the proposed federal Employment Non-Discrimination Act (ENDA), which would ban discrimination in employment on the basis of sexual orientation. Months before, ENDA had passed the U.S. Senate, a milestone since some form of ENDA had languished in every Congress since 1994. ENDA got through the Senate in part due to its provision exempting religious employers, a concession that after Hobby Lobby was no longer seen as palatable.

As the groups explained, “The Supreme Court’s decision in Hobby Lobby has made it all the more important that we not accept this inappropriate provision.”

On July 21, 2014, President Obama signed an executive order prohibiting federal contractors and subcontractors from discriminating on the basis of sexual orientation and transgender identity, a huge gain for supporters of LBGT equality since federal contractors employ millions of people. As Professor Doug Laycock noted, “the White House was lobbied hard by gay-rights groups, religious organizations, and advocates of religious liberty.” Religious groups wanted expanded exceptions (link no longer available). Gay rights groups wanted “no exception for religious organizations” and invoked Hobby Lobby, saying it does “not compel in any way the inclusion of religious exemptions language.”

In the end, the Order contained no “additional exemption for religious entities.” Compromise was simply out of reach.

The blowback has filtered down to the states, as well. Witness Michigan, which is in the midst of a state legislative debate over whether to add sexual orientation protection to the state’s antidiscrimination law. As David Eggert of the Associated Press reported on September 19, progress on the bill stalled over exemptions, which opponents characterized as “inserting licenses to discriminate into the bill.”

Religious accommodations, present in every statewide law banning discrimination based on sexual orientation in the Union, have become deplorable for some.

Added to these concrete struggles over whether gay rights and religious liberty can peaceably coexist are wholesale calls for RFRA’s repeal. Critics see RFRA as a vehicle for “employers to assert a ‘religious’ right to deny other health benefits . . . or to discriminate in other ways,” while others fear it sets a “dangerous precedent.” Now, it is not clear that chafing over Hobby Lobby will take down RFRA. A Senate bill to simply overturn the result in Hobby Lobby was “torpedoed,” the Wall Street Journal reported on July 16, when congressional critics could not marshal the votes to get the repeal measure to the Senate floor.

However, the blowback over Hobby Lobby has not been contained to RFRA or other generalized protections like the Religious Land Use and Institutionalized Persons Act of 2000, which “test government-imposed burdens on religion against the necessity of imposing those burdens.” Ominously, it has extended to specific exemptions for religious beliefs or practices in particular statutes, as ENDA and the Michigan bill illustrate. The classic example of a specific exemption is the provision in Title VII of the Civil Rights Act of 1964, permitting religious employers to give preferences to coreligionists in hiring.

Although generalized protections and specific exemptions serve different functions and operate differently, after Hobby Lobby commentators indiscriminately tag both as “get-out-of-jail-free cards,” entitling the protected party to abrogate other people’s rights. All religious liberty protections are bad, they say, because they allow religious people to veto legal obligations that would otherwise apply to them, thus inviting situations of “unfair surprise” in the contract law sense, treading on the interests of third parties, and hampering social change.

As I explain in a forthcoming essay, there is room for generalized and specific protections alike. But whatever one thinks after Hobby Lobby about RFRA, specific exemptions avoid the criticisms now leveled at RFRA.

Consider the claim that all religious liberty protections place religious believers above the law. In this lawlessness narrative, “the invocation of a religious belief allows [a believer] to opt out of a government requirement that applies to everyone else.” Ironically, this intuition is precisely the one that led the U.S. Supreme Court in Employment Division v. Smith to conclude, pre-RFRA, that a “neutral, generally applicable law” would not offend Free Exercise Clause guarantees even if that law tended to burden religion. In rejecting the heightened scrutiny that had preceded Smith, the Smith Court said it would “make the professed doctrines of religious belief superior to the law of the land, and in effect permit every citizen to become a law unto himself.”

Yet the Smith Court opened the door to RFRA. Writing for the Court, Justice Scalia observed:

In RFRA, Congress by an overwhelming, bipartisan majority “facially require[d] strict scrutiny of all substantial burdens on religious practices” by the federal government. Congress’ self-imposed restraints apply to its own legislative actions, as well restraining the regulatory bodies that implement federal law through regulations, like the contraceptive coverage mandate.

By design, RFRA adjusts burdens on religious believers after the fact. RFRA asks judges to find the facts and “strik[e] sensible balances between religious liberty and competing prior governmental interests.” Only a law written as a standard can protect Mormons, Catholics, Jehovah’s Witnesses and Santerias in all their varied religious practices. Only a law written with the flexibility of a standard can provide essential protection to religious minorities whose practices impact too few people or are too unpopular or ill-understood to garner specific protections in the political process.

When the government overreaches, RFRA relieves successful litigants from otherwise applicable duties under a challenged statute—an outcome that is not, and cannot be, clear from the face of the challenged statute itself. Of course, the outcome is not “lawless” since Congress impressed these restraints on federal action in federal law. And as Justice Alito reminds us, the Court must enforce RFRA as written.

Yet it is precisely this ex post application of RFRA to an otherwise applicable duty, like the mandate itself, that makes some feel that there is one set of rules for religious believers, and another for everyone else.

Consider Title VII. Absent an exemption, its prohibition on discrimination could run headlong into the practice of some religious groups to dictate, for example, that only members of that faith can serve as leaders of the faith. So, Congress made it clear that religious organizations may choose to “employ persons ‘of a particular religion.’ ” Importantly, the specific exemption drops from the scope of statutory duties not to discriminate on the basis of religion, certain religious groups that must do so in order to maintain their character.

When a legislature chooses to exempt a religious belief or practice from the scope of a new law, it is no more placing religious believers “above than law” than when the legislature chooses to exempt a small employer. As Justice Ginsburg notes in her Hobby Lobby dissent, small employer exemptions “have never been held to undermined the interests served by these statutes”—and neither should narrow, well-constructed specific exemptions.

Because the exemption is clear on the face of a given law, specific exemptions reduce the likelihood of surprise. It is true that the possibility that a member of the public will be surprised increases with time after a statute’s enactment. Yet, thoughtful legislators can pair the right to refuse with notice beforehand—affirmatively reducing hardships to others. Advance notice allows the public to know when a provider is unwilling to assist. Other exemptions require notice to one’s employer, which then allows an employer to staff around the objector so that a refusal creates no hardship to the public, who may never even know about it.

Where hardship may result—such as increased time or “search costs”—specific exemptions can be constructed to take into account the impact on third parties. For instance, some states pair the right to refuse to fill a prescription on religious or moral grounds with a duty to refer. Others condition the right to object on avoiding substantial hardship to the public, such as when a woman’s life or health hangs in the balance if an abortion is not performed.

Generalized protections and specific exemptions are different in their burdens and impacts, largely because they seek to serve different goods. The dismay and concern we are seeing in the wake of Hobby Lobby threaten to undo all religious accommodations—even narrow, specific exemptions that raise little risk of surprise and need not create hardships for others. It would be a shame to take down these important American achievements in pluralism if we find we cannot live with Hobby Lobby.

Why The Proposed Trump Order on Free Speech Is Misguided

Issuing this order about free speech will not make it less likely that progressives will continue to misuse executive authority for their own purposes.

People Against the American Way

Standing Up for Free Speech on Campus