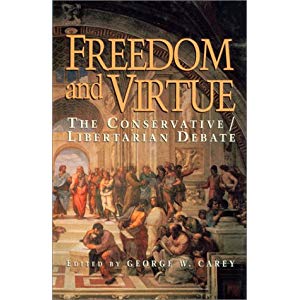 Over at Reason, they have a review of Andrew Breitbart’s speech to CPAC:

Breitbart, who admits to having libertarian leanings, thinks libertarians should not be discouraged by the media’s portrayal of the conservative movement. “[Libertarians] don’t want to be in the same room as conservatives because it will hurt their street cred. Conservatives, especially right now, have a hell of a lot more in common with libertarianism than Barack Obama and what the progressive left stand for,” he said.

Alas, I think there is quite a bit to say for what Breitbart is claiming.  Certainly, libertarians — even those who are hostile to conservatives — must recognize that Obama and the progressives are the great threat now.  And I think, as compared to 2008, libertarians tend to get this.  It is true that, even if the Republicans and conservatives win the Presidency, the Senate, and the House, they would likely achieve less than one would hope.  But that is, one must admit, the reality of politics.  Change is gradual.

Libertarians are in a tricky situation.  Being neither liberal nor conservative, they must navigate in a world in which they are a small minority.  For those in the academy, there is a strong temptation to emphasize the distinction with conservatives, so that they can “pass” for non-conservatives.  Back in the day, which I was less conservative than I am now, I was invited to a wedding of a guy I knew in law school.  His bride admitted to me at the wedding itself, that I would not have been invited, had I been a conservative.  A libertarian could pass, but not a conservative.

Libertarians who are in other circles dominated by conservatives — say in Republican politics — have the reverse situation, where they are treated badly by social conservatives.  Sadly, the Weekly Standard for many years was quite unfair to libertarians.

I have seen this from different perspectives over the course of my life.  In my early years as a libertarian, I equally resisted the conservative and liberal labels.  (Hence, I was invited to the wedding.)  But over time I came to move a bit to the conservative side, and often was viewed as a conservative — I still am to this very day.

There is, whether we like it or not, a social side to politics, and people — being both social and political animals — respond to both.  So there is no use denying or ignoring it.

Is There a Viable Conservative Alternative to Markets?

When conservatives blame markets for illnesses generic to all modern economies, they misdiagnose the cause and therefore prescribe faulty remedies.

Philosophical Absolutes and the Constitution

The key conflict these days is between “originalism” and deference to legislatures.