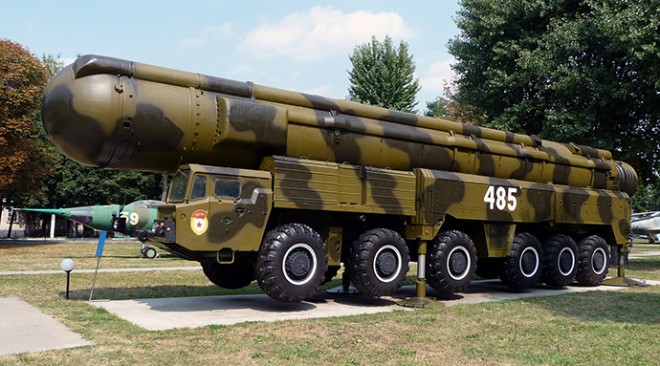 Recently, President Obama protested to Vladimir Putin that Russia had been violating the 1987 Intermediate Nuclear Forces in Europe treaty (INF) for the last six years by testing precisely the kind of missile that the treaty prohibits. That protest, as reported by the New York Times, is a textbook lesson in how a government earns the contempt of others.

The U.S.-Soviet INF treaty had settled one of the Cold War’s major military confrontations. The Soviet Union had been threatening to overwhelm Europe with its medium-range, nuclear-tipped missiles. The missiles with which the United States responded—placing them on the territory of allies like Britain and West Germany—threatened Soviet elites and military forces especially severely because their short flight times would not have allowed them much chance to take shelter. The INF treaty, which banished both sets of missiles, turned out to be a prelude to the Cold War’s end.

Vladimir Putin, however, never renounced the Soviet objective of overwhelming Europe politically by exhibiting the power to do so militarily. Hence, he set about building a new generation of intermediate-range, nuclear-capable missiles. Washington noticed. But what to do?

In a nutshell: Since Obama has no intention of forcing compliance with the treaty, or of neutralizing its flouting with countermeasures, his taking public note of Russia’s violation simply enhanced the effect of Putin’s assertion of power. By advertising American inaction, he brought international contempt on the United States.

Mr. Obama underscored his interest in a high-level dialogue with Moscow with the aim of preserving the 1987 treaty and discussing steps the Kremlin might take to come back into compliance.

Gordon adds that administration officials “say there are measures the Russians can take to ameliorate the problem.”

Since the Kremlin has shown that its aim is to transcend the treaty, why should it regard transcending it as “a problem” to be ameliorated? And with what attitude are Russian officials likely to listen to Obama’s suggestions about how they might bring Russia back into compliance? Under the circumstances, any Americans in such a dialogue, high-level or low, would have to know that those on the other side would be laughing at them.

Reportedly, however, Obama is as serious as he is capable of being (about non-domestic affairs): “A weapon capability that violates the I.N.F., that is introduced into the greater European land mass, is absolutely a tool that will have to be dealt with,” he said in an interview in April. “It can’t go unanswered.”

Nevertheless, the Obama administration has told Gordon: “Mr. Obama has determined that the United States will not retaliate against the Russians by violating the treaty and deploying its own prohibited medium-range system.”

What would he demand of Putin? Nothing short of, one, “a promise not to deploy the system,” and two, “inspections to demonstrate that the cruise missiles and their launchers have been destroyed.” Why Putin would lower himself to accede to these requests is not clear. But it is even less clear why one would bother making them, because since “the missiles are small and easily concealed, obtaining complete confidence that the weapons have been eliminated might be difficult.” That is an understatement.

Obama’s response to Russia’s treaty violation transcends the issues of the treaty. Indeed, it transcends Europe itself. It is important because it underlines, yet again, how U.S. foreign policy brings contempt upon America by violating the principles of statecraft.

One of these principles is that governments “take note” of events only to the extent that they have reasonable plans for dealing with them. It is better to pretend that events have not occurred, leaving other governments to wonder how one might respond later or indirectly, rather than to demonstrate incapacity in the face of those events. In other words, better to be thought fools than to remove all doubt by speaking. Better to suffer injury quietly than gratuitously to call insult upon one’s own head. Whereas injury is limited to the instance at hand, loss of respect reverberates around the world and affects all other relationships.

Another is that a government should start down any path of remonstrance only with a good idea of how that remonstrance fits into its overall plans. Obama wants to ask Putin to be nice. But what is his evaluation of Putin’s Russia and of U.S. policy toward it? Was the set of favors he did for Russia over the past five years that he labeled “reset” sound policy toward a partner or mistaken aid to an enemy? Was it a good idea to overlook Russia’s 2008 invasion of Georgia? Was it a good idea to stiff Poland and the Czech Republic regarding missile defense? Would it be a good idea now to protect America against Russian missiles and to give arms to Ukraine as it fights off Russia?

Remonstrating with Putin over his longstanding violations of the INF treaty makes sense only in the context of answers to such questions.

Entropy in the Executive

Accepting the Risks that Come with Liberty