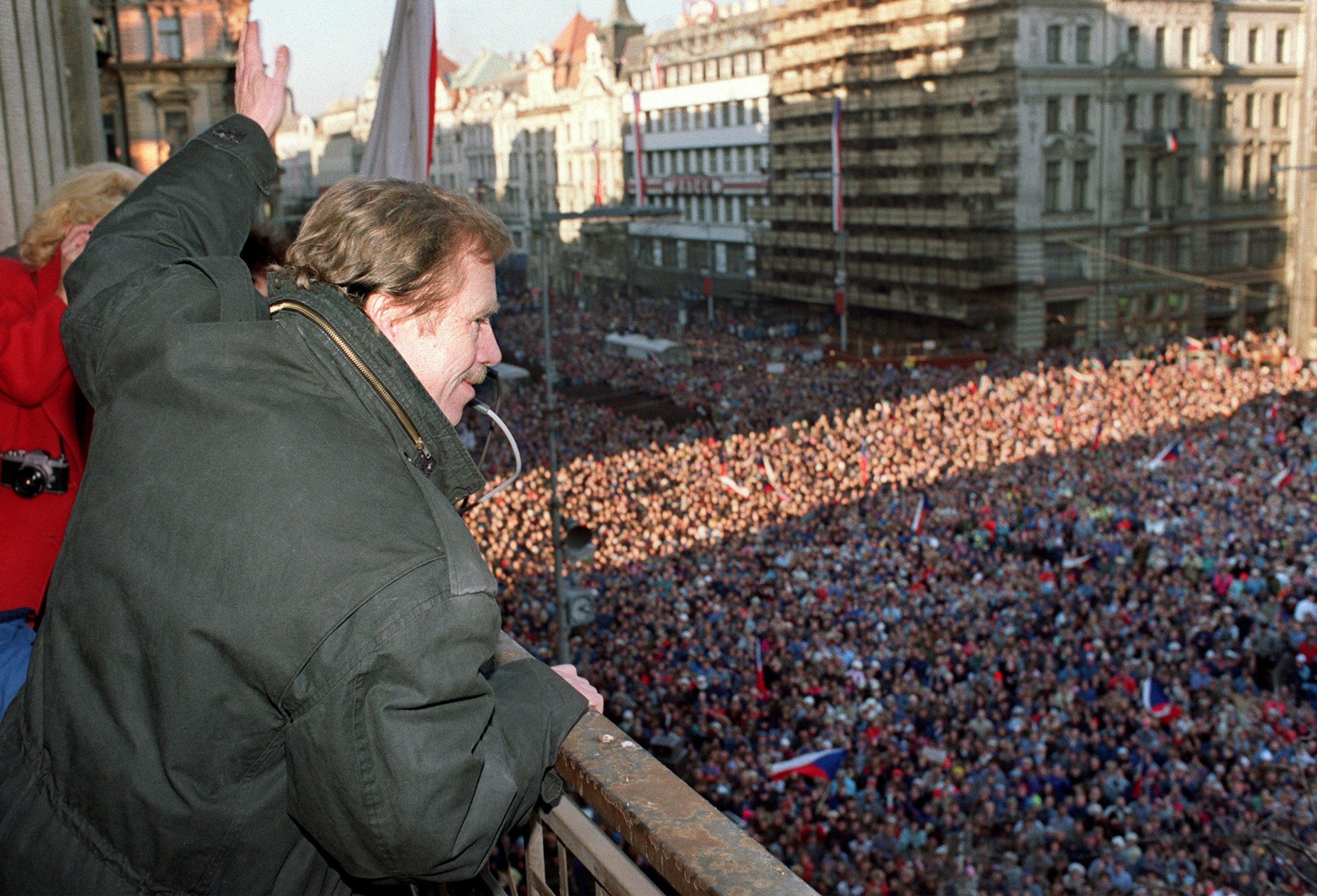 Charter 77, the human rights group in the former Czechoslovakia dedicated to recognizing and protesting the lawlessness and abuses of the communist regime, turned 40 last month, and the milestone was marked by a panel discussion in Washington sponsored by the Czech Embassy and the Victims of Communism Memorial Foundation.

“The Enduring Significance of Charter 77” featured leading scholars and also Martin Palouš, one of the original 241 signatories of the Charter, who became his country’s ambassador to the United States a decade after the collapse of the Union of Soviet Socialist Republics. Palouš called the Charter movement “a candle in the middle of the night”—the night having fallen over Czechoslovakia with the thunderous Soviet invasion of 1968. The movement emerged quietly during the dark days of what the communists called “normalization”—the restoration of “really existing socialism” after the 1968 invasion quashed the experiment in liberalization known as the Prague Spring.

A massive purge of the Communist Party and state institutions in the early 1970s initiated two decades of hyper-bureaucratized, uniform, mendacious rule. In exchange for passive obedience through feigned affirmation of party orthodoxy, the regime offered relative peace and quiet for most citizens of Czechoslovakia. But, as Palouš reminded the audience, “a society where people are forced to lie to themselves is not sustainable over the long term.”

The Chartists announced in January of 1977 that the regime would no longer be able ignore its own laws with impunity. In so doing, they were alertly taking advantage of the Soviet signing, two years before, of the Helsinki Accords: under Moscow’s agreement  with the West, certain international conventions on political and civil rights were incorporated into Czechoslovak law (and the laws of all the captive nations of the USSR).

Because of this focus on the rule of law and bringing abuses to the attention of their fellow citizens, they were able to attract a broad range of political opinion to the movement, from Trotskyites on the Left to Catholic conservatives on the Right. This range of opinion made the Charter something of a puzzle to Westerners, as did the unusual context in which the Charter operated, according to panelist James Pontuso of Hampton Sydney College. Professor Pontuso—author of a book on Václav Havel, the late writer, Charter leader, and president of the Czech Republic—said in his presentation that the Charter was a kind of orphan throughout much of its existence. Neither the Right nor the Left knew what to do with it, for it seemed too anticommunist for the Left but perhaps overly friendly to socialists of various stripes for the Right.

This diversity, however, was suddenly a blessing when the Velvet Revolution arrived in 1989, when a variety of political actors moved to claim the Charter for their own purposes. It was then that the movement entered its “golden child” phase, said Pontuso.

Yet the phenomenon of the Charter and its origins remains, four decades later, rather misunderstood. The remarks by Ambassador Palouš emphasized the importance of classical political philosophy to the movement. What was needed during the dark period of “normalization” was a third alternative to escape from Soviet tyranny through emigration, on the one hand, and “coordination” with the regime on the other (that is, compromising oneself for the sake of security). The Charter offered the possibility of resistance on a moral or existential level. Perhaps one could “live-in-truth,” in Havel’s words, or put one’s speeches and deeds in their proper relation.

Havel’s mentor, Jan Patočka, posed what was in essence a philosophical question: whether one might, with Socrates, set oneself the goal, not of achieving prosperity in society, but of finding out “how [one’s] soul will be the best possible.” As Patočka argued during the seminars he and other dissidents secretly held during mid-1970s:

Patočka would also bring “philosophy down from the heavens” in his own manner by agreeing to become an early public spokesman for Charter 77. An already ill Patočka would, in March of 1977, succumb to a brain hemorrhage after many hours of interrogation by the StB (the Czechoslovak secret police) on successive days. According to Palouš, “totalitarian regimes are always afraid of people who are not willing to coordinate themselves.”

Patočka’s great deed cemented the Charter community’s discovery of solidarity—that is, they discovered that in standing up for the truth they were also standing up for one another. In speaking openly and truthfully, the Chartists secured not only the good of their own souls, but made it possible for others to do the same.

Looking back, one can discern the elements of a strategy deployed by the Charter movement. The strategy was not designed in advance but hewed out of Chartists’ responses to events and conditions on the ground. They had to adapt their thinking and approach in light of such milestones as the death of Patočka, and the vicious crackdown by the regime.

Another prominent member of the Charter movement, a mathematician named Václav  Benda, wrote a short essay for his fellow Chartists in the spring of 1978 called “The Parallel Polis.” In it, he broached a new idea in light of events: that the Charter community might consider offering something more concrete to their fellow citizens. Calling the regime to account for its own lawlessness was a noble and worthy enterprise, but the regime gave no indication that it would moderate its behavior or abide by the Helsinki conventions on civil rights.

Benda wanted to confront another aspect of totalitarian rule: the extreme atomization of life. He thought the Charter ought to nurture and develop societal institutions like an underground university, underground churches, and samizdat literature and cultural organizations more broadly. He argued that it was in such nascent institutions that a concrete communal life was trying to reassert itself; that people could go to these spaces to experience meaningful bonds of trust and affection; that they could truly put things in common and expand their horizon of concern beyond a small circle of family and friends. Benda’s great insight was that in order for people to think and act freely—to throw off the bonds of ideology and fear—they needed to regain a taste for freedom.

Putting things in common with others might be a disposition of the human soul, but it is a disposition that can decay without attention and use. As the Baron de Montesquieu well knew,

Man, that flexible being, conforming in society to the thoughts and impressions of others, is equally capable of knowing his own nature, whenever it is laid open to his view, and of losing the very sense of it, when this idea is banished from his mind.

The totalitarians took great advantage of this flexibility and instituted an order that atomized society to an extent the world had never seen. Václav Benda thought the reawakening of the social and political nature of man was the precondition for the reassertion of freedom on a broader scale.

The project of “the parallel polis” would take many forms. Priests ordained abroad would return and perform their offices in private flats and conduct underground Bible studies. Theater groups would perform banned plays in homes. A vibrant literary culture survived in samizdat and multiple underground publishers circulated books and journals to subscribers.

Another panelist at the Washington event, Marianne Canavaggio Silvéréano, offered her memories and reflections as a participant in this world of samizdat and the Charter. Silvereano had arrived in Prague from Paris in the early 1980s on a scholarship to study the Czech language. Soon she found herself meeting with Chartists, teaching them French, and smuggling documents, texts, and even photocopying equipment in and out of the country. The Charter community would come to rely on many sympathizers such as Silvereano to carry out its work.

What is the legacy of Charter 77? As Pontuso put it, “Wherever people are subjugated and kept in ideological binders, people will discover what Charter 77 did.” Pontuso  discovered this first-hand while teaching at the American University of Iraq seven years ago. He occasionally received requests for meetings from Iranians who would come across the border to Sulaimani, Kurdistan. On the agenda would be some topic related to political philosophy or a particular thinker—but on more than one occasion, the Iranians (after appropriate measures to ensure relative secrecy) made clear to Pontuso what the visitors really wanted to discuss with him. It was Charter 77 and dissidents in general.

Ambassador Palouš, who currently teaches at Florida International University and directs the Václav Havel Program for Human Rights and Diplomacy, regularly works with Cuban dissidents. He likened the “normalization” regime of former Czechoslovakia to Cuba today. At Georgetown University, as a part of the Charter 77 anniversary events, he screened the documentary An Unfinished Dialogue, featuring Oswaldo Payá and Václav Havel, and spoke with Rosa María Payá Acevedo, the daughter of the Cuban dissident, who died under suspicious circumstances five years ago.

The panel held one final lesson for our current politics, when Palouš noted that today the search for truth seems to be under attack. “Everybody is selling different narratives. We all need to appreciate others who bring new facts to bear,” he said. Remembering Charter 77, with its members who held a strikingly broad range of political and philosophical commitments, should teach us all intellectual humility. “People did not keep their beliefs untouched by others,” said Palouš. What is the worth of protest if it is too insular to encounter anything outside itself?

A Grimly Effective Death of Stalin

There’s a lesson here for those who imagine one-party states, ideologues, and power-hungry tyrants are not really so different from you and me.