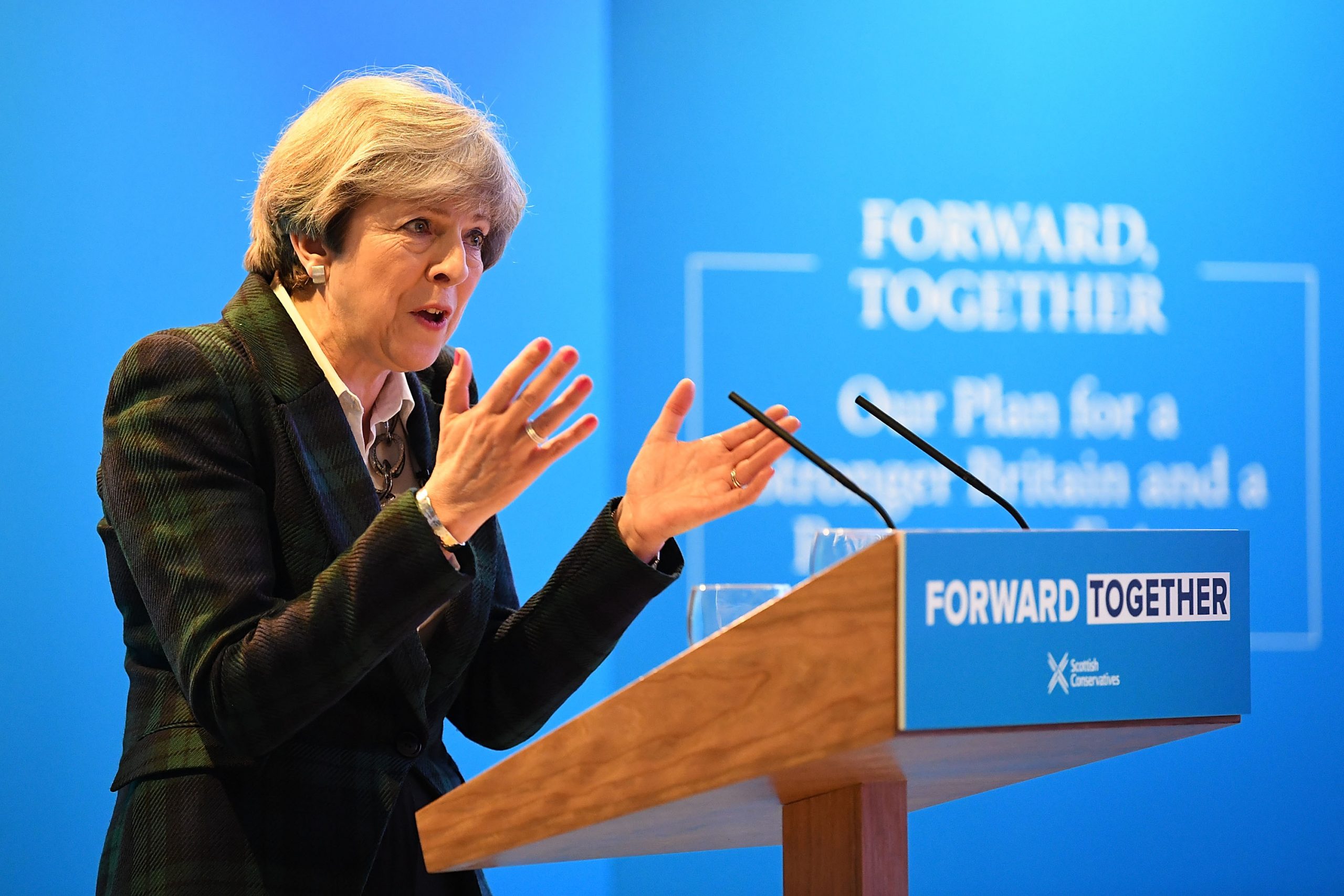 EDINBURGH, SCOTLAND – MAY 19: Prime Minister Theresa May gives a speech at the launch of the Scottish manifesto. (Jeff Mitchell/Getty Images)

In politics, there are no final victories and no lessons that are learned for good: error, like hope, springs eternal. Moreover, what counts as error for some may be wisdom, or at least temporary advantage, for others. There is no catastrophe, political or economic, from which someone does not benefit.

In modern democracies, promises to tax-and-spend are like sin, a permanent temptation: only that they are worse, in so far as they are an instrument for some to gain and (as they hope) to keep power. And so the pendulum swings, seemingly for ever, between extravagance and retrenchment, the former always being more popular than the latter.

In Britain, Mrs. May has overthrown the legacy of Mrs. Thatcher, though nominally she is of the same political party. In the matter of taxing and spending, she is to the left of Mr. Blair, of the supposedly left-wing Labor Party. He was only for spending without taxation, while she is for spending without a promise that she will not raise taxation. I suppose that this is an advance of a kind; but even Mr. Blair, who was to economic thought what Walt Disney was to the zoological study of mice, did not believe in price controls of vital commodities as a means of assisting the poor, as she appears to do with regard to the prices of gas and electricity. Here the late Hugo Chavez is more her guru than is Mrs. Thatcher.

Whatever her private thoughts on these matters, her lurch to the left is an attempt to hammer yet another nail in Labor’s coffin by stealing its shroud (forgetting that political coffins are only temporary residences), and by disembarrassing her party from its reputation among intellectuals for nastiness, that is to say its foundational reluctance to spend other people’s money to create a political and economic clientele in the name of benevolence – whatever its actual performance once in power.

She starts with a certain advantage. The population has been successfully persuaded that the attempt to align expenditure more approximately with income is akin to monkish asceticism, popularly known as austerity. To spend money that you don’t have and therefore have to borrow or extract by taxation has been peddled by economists and commentators as both generous and wise, without any close examination of how and on what the government actually spends its money.

In essence, such expenditure in Britain at any rate is used to maintain current levels of consumption in circumstances in which public and private indebtedness are already very high, the rate of savings is low, and the current account deficit is abyssal. A crisis of confidence is thus not very far away, especially in the present climate of uncertainty. To promise a radical shift of policy in the direction of more government expenditure, paid for either by borrowing or by increased taxation, or both, is imprudent, to say the least. It is an excellent example of the pathology of modern democracies, in which short-term electoral advantage so often outweighs and undermines longer-term policy.

Mrs. May has said that she wants the government to “invest” more in healthcare and education: and who can be against investment? However, for expenditure to be investment there must be some reasonable expectation of economic return on the money supposedly invested. To eat in an expensive restaurant may give pleasure which is a desirable end in itself, but is hardly an investment.

But we in Britain already have recent experience to demonstrate that increased government expenditure on healthcare and education does not necessarily lead to appreciable improvements in either, and certainly not in reasonable proportion to the amounts spent. While government expenditure of education doubled, for example, British children slipped further down the rankings in achievement by comparison with the children in other countries. And the reasons for widespread educational failure in Britain cannot possibly be a lack of expenditure, since they occur in elementary matters which cost very little to teach successfully, such as ability to read and do simple arithmetic, and which are already funded more than adequately.

The reasons for failure are to be found, rather, in a combination of cultural factors and misallocation of funds, the latter being a specialty of many governments, not only the British. But the centralisation of the British system ensures that when the government makes a mistake it is certain to be a colossal one; by contrast, even where it attempts something that on the surface seems sensible, the lower levels of employees in the system can easily subvert it if it is against their interests to implement it properly. The government proposes, but the bureaucrat disposes.

Mrs. May, however, no doubt with the grandiosity that often afflicts those in high positions, appears to believe that she has only to pull some governmental lever and there will be the desired result at the other end of the machinery. Whether she actually believes this is beside the point; by calling expenditure investment she acts as if she believes it, with predictably bad economic consequences.

Electorally, however, she feels obliged to make her disastrous promises because she has seen the rise in popularity of her generally ineffective opponent, Mr. Corbyn, since he promised, if elected, to do such things as make university education free, paid for by taxation of the rich. For Mr. Corbyn, the rich are just like milch-cows, there in the field to be milked as much as he thinks fit, with udders that cannot dry up and incapable of movement to another field. More than a third of the population, according to polls, is with him on this, for no political emotion is stronger, of longer duration and more difficult to eradicate than envy and resentment of those better placed economically than oneself. Resentment springs eternal.

Oddly enough, this economic primitivism in a politician is seldom designated by commentators as populism, perhaps because it is felt to indicate generosity of spirit even in its erroneousness. It does no such thing, of course, any more than does fiscal prudence. When Mrs. May responds to Mr. Corbyn’s economic populism, then, she is not showing her generosity; she is demonstrating her unscrupulousness.

The Culture and Politics of Economic Growth

How Unspeakably Bad to Be Relatively Worse Off