When I first heard the Zac Brown Band’s popular single “Chicken Fried,” my wife had to endure another one of my rants about how ridiculous contemporary country music has become. Short of including a rap cameo, the song hits about every cliché coming out of Nashville today. “You know I like my chicken fried,” Zac Brown intones in his Georgia drawl. “Cold beer on a Friday night/ A pair of jeans that fit just right/ And the radio up.”

Eating fried chicken and drinking beer in a pair of well-fitting jeans does make for a decent evening. But the part of the song I cynically dismissed was Brown’s attempt to tie the mundane joy of a southern Friday night to the ultimate sacrifice our soldiers are sometimes called to make. In a tribute to the military, Brown offers a salute “to the one who died/ The ones who give their lives/ So we don’t have to sacrifice all the things we love.” He then immediately breaks back into the chorus, as if to offer an example of the things for which that sacrifice is made: “Like our chicken fried/ Cold beer on a Friday night.”

Since then I have changed my mind about the song. While making breakfast for my two young boys on a recent Sunday morning, “Chicken Fried” came on my Pandora station. As I watched the boys play, with a pot of coffee brewing and oil crackling in the skillet, a flood of unexpected joy filled my heart – triggered by a song I had written off as trite and clichéd. Yet on that morning, Zac Brown might well have sung about making French toast and watching two brothers play.

Somehow, in that moment, the lyrics seemed profound and not at all forced. As I listened, lines from C.S. Lewis’ Mere Christianity came to mind. “The State,” Lewis insisted,

exists simply to promote the ordinary happiness of humans in this life. A husband and wife chatting over a fire, a couple of friends having a game of darts in a pub, a man reading a book in his own room or digging in his own garden—that is what the state is there for. And unless they are helping to increase or prolong those moments, all the laws, parliaments, armies, courts, police, economies, etc. are simply a waste of time. 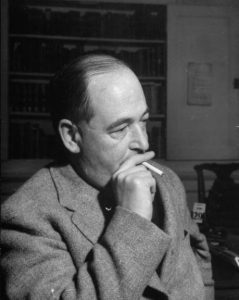 Lewis likely would have considered today’s country tracks (as he did modern hymns) to be “fifth-rate poems set to sixth-rate music.” Yet his simple insight into the purpose of the state helped me recognize something true and even profound in this fifth-rate poem by the Zac Brown Band. If all laws, all parliaments, all armies, have as their rightful purpose the protection of those moments of ordinary human happiness, then the sacrifice so many have made is rendered more extraordinary, not less; and we have reason to remember the armed forces with gratitude and appreciation especially during those otherwise mundane times in which inexplicable joy breaks in to our lives.

The same idea about the limited purpose of the state in human affairs crops up often across Lewis’ many and diverse writings. In another essay, he put the point slightly different:

As long as we are thinking of natural values we must say that the sun looks down on nothing half so good as a household laughing together over a meal, or two friends talking over a pint of beer, or a man alone reading a book that interests him; and that all economies, politics, laws, armies, and institutions, save insofar as they prolong and multiply such scenes, are a mere ploughing the sand and sowing the ocean, a meaningless vanity and vexation of the spirit.

Lewis concluded this thought with an important lesson about our public life. “Collective activities are, of course, necessary,” he insisted, “but this is the end to which they are necessary.”

The various totalitarian ideologies of the twentieth century rejected this limited understanding of the state. According to the modern heresies, birthed in the twentieth century on the left and the right, individuals are subordinate to the state, nation, economic class, or some other metaphysical abstraction. The promised end is always great: a future without conflict, the perpetual relief of poverty, the strengthening of the nation. But the end requires a concentration of power in the hands of those who control the state, and actual individual human persons are nudged from center stage. Laws, politics, legislatures, and armies suddenly become about much more than the protection and promotion of those ordinary moments of human happiness.

The reality is that power has a corrupting influence, because human nature is corrupt. Varieties of statism have this in common: each requires some to be invested with enormous power over others. Of those in power there will ever be, as Lewis warned, “none perfect; some greedy, cruel, and dishonest.” The question we must always ask, then, is “why, this time power should not corrupt as it always has done before?”

The dilemma is clear: collective activity is necessary for human happiness, but the collective concentration of power, whatever its merits in theory, is disastrous in practice. The solution, for Lewis and for the broader liberal tradition, is found in the prudential arrangement of institutions, the separation of powers, and a countervailing balance between the forces of government, private industry, and civil society. Liberal constitutionalism, understood in this way, is not perfect, but it is our best hope of increasing and prolonging those moments that make life worth living.

Why I Am A Natural Lawyer