What an absolutely astounding admission former Fed boss Alan Greenspan makes about his new book The Map and The Territory: “Not a single major forecaster of note or institution caught it [the 2008 crash]. The Federal Reserve has got the most elaborate econometric model, which incorporates all the newfangled models of how the world works—and it missed it completely. I was actually flabbergasted. It upended my view of how the world worked.” 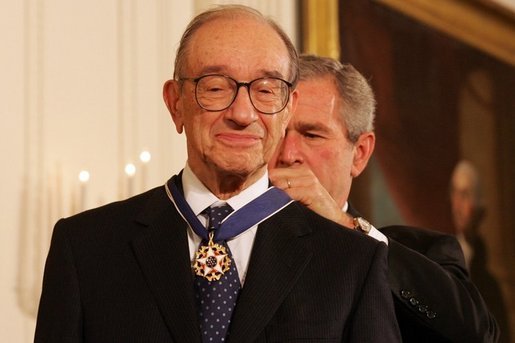 That this epitome of Washington brilliance and establishment power really thought the little models could actually forecast the future takes one’s breath away! One could expect that such models would be used as rough guides to action and to keep naive investors calm but that he was surprised the models did not predict specific events is incredible, especially for someone who supposedly had believed in markets. He admits he just now realizes that irrational fears influence how people behave! But we are supposed to trust these guys with $3 trillion sitting in the Fed, telling us they have a way out because the models are scientific, right?

Nobel Laureate F.A. Hayek predicted that people in the future looking back would “discover that the most widely held ideas which dominated the twentieth century” like scientific planning “were all based on superstitions…an overestimation of what science has achieved.” Hayek noted more than a half century ago that there were more intercortical connections in one person’s mind in a few moments than there are atoms in the entire solar system. While the material world still largely remains a mystery to science, human behavior is a real black hole. With billions of people’s minds and untold interactions between them the total human complexity is overwhelming. No super-mind in some Federal Reserve or White House can comprehend this complexity, much less control it. The progressive pretension to understand what they cannot possibly know is the true source of today’s discontent.

The number of books today rediscovering this truth is becoming a torrent. The Discovery Institute’s Stephen Meyer hit number seven on the New York Times bestseller list with his stunning new book, Darwin’s Doubt. The title reflects the fact that even Charles Darwin had one great doubt about his materialistic theory of human evolution, that natural selection by random mutation is the sole explanation of life on earth. Specifically, he questioned whether what was called the Cambrian Explosion of 500 million years ago could have occurred that recently (out of an estimate of only 3 billion total years of life on earth). How could higher life arise over such a short period of time, and where were the fossils demonstrating such a progression of forms?

Much of Meyer’s detailed book systematically analyzes attempts to fill in the fossil record and to explain the short time period. In sum, he demonstrates conclusively that modern science is no closer to explaining the missing data than it was 150 years ago when Darwin predicted it would soon show up. The odds that these links will appear after all this time is remote. More important, to mutate into new body parts we now know would require new genetic/DNA and epi-genetic/non-DNA biological information be placed into already enormously complex information sequences that would often be lethal to them–while to transition to new life requires being viable at every stage. The odds against this are very great and the evidence we do have is against it.

We know so much more than did Darwin. His contemporary and supporter Ernst Haeckel believed (as Darwin presumably did) that a cell was a mere lump of matter. Now we understand (something) more about real cells. They are not lumps but incredibly complex with DNA and cell structure both playing a role in its integrity. We have just begun to understand how the two percent of DNA thought to be functional (rather than “junk”) might work. But we have even more recently discovered that some epigenetic information may be just as important as DNA in the cell although we do not know quite how. Then comes the prestigious journal Nature to report that the ENCODE project now estimates that at least 80 percent of DNA actually serves some biochemical purpose. Seventy-eight percent we thought was cell junk now must be taken seriously. This is really getting complicated!

George Gilder, the influential author of the bestselling Wealth and Poverty, thinks he has an explanation in his recent blockbuster, Knowledge and Power. He offers a “science of information” as the way to understand the complexity. His theory is a mathematical model of entropy (or disorder) based on the logic of physical entropy where at one extreme the world is considered totally disordered and unexplainable. The opposite is a small part of reality that seems to be ordered so that we understand it. “Surprise” or change or “noise” is when new information increases what is ordered and understood. New understanding requires a low entropy channel relatively interference free. All information can be explained in this context, he argues, and so information theory would seem to solve the problem of complexity. But there is a kicker–the creation or change process itself “defies every logical and mathematical system.”

The materialist reductionism of the modern scientific worldview throws up its hands at this lack of system. Its complexity so increases the number of interactions required to sustain evolution, for example, it must invent “parallel universes” out of whole cloth to explain what is inexplicable in the universe that we actually live in. In the real world, DNA codes can define the amino acids that form proteins but the proteins cannot specify the codes that define their antecedents. Indeed, only human intelligence can pierce through the immense disorder to create new understandings. There is a hierarchy–human intelligence reveals the physical world as the human programmer defines the physical computer. The GeneChip can search millions of bits of information but without intelligence there is no logic how to search in a complex reality greater than the atoms in the universe, Gilder concludes, using the same analogy Hayek used back in 1944.

In his new book Mind and Cosmos New York University philosopher Thomas Nagel concludes that simple materialism cannot fully explain the world as we now understand it, especially the mind. He attempts to develop a third way between materialism and theological explanation but was widely criticized by his academic friends for such unorthodoxy in challenging materialism as a sufficient cause. As far as religion, Nagel replied, “It isn’t just that I don’t believe in God and naturally hope I’m right in my belief. It’s that I hope there is no God! I don’t want there to be a God; I don’t want the universe to be like that.” But he still insisted that materialism by itself cannot explain mind.

Nagel even spoke respectfully of the Christian philosopher Alvin Plantinga, who has probably written the most radical argument questioning the lack of science supporting Darwinism and the whole materialist hypothesis it rests upon. While Where the Conflict Really Lies has no argument against evolution explaining how some material change takes place, he argues it cannot explain the more complex systems. As his title suggests, Plantinga is mostly interested in refuting that traditional religion is in conflict with real science. He refutes the popular alleged conflicts between the two, explains why the real conflicts are superficial and why the two realms are mostly in concord.

In ending his argument, Plantinga quotes materialist molecular biologist James Shapiro that “there are no detailed Darwinian accounts for evolution of any fundamental biochemical or cellular system only a variety of wishful speculations.” Materialism-only is an assumption not an empirical conclusion. Materialism-only, particularly in Darwinism, Plantinga concludes, is simply a religious-like assumption. Hayek’s term “superstition” would seem apt.

What difference does this make? The practical side is that all modern public administration rests upon the superstition of a naturalist science fully explaining human action, which in turn can be manipulated by government experts to provide for society’s welfare. Until we develop a more sophisticated idea than this simplistic materialism in trying to explain our complex human social, economic and political life we can expect the same “flabbergasted” results. Greenspan has learned too late but perhaps there is still time for the rest of us.

Are We Witnessing the Rise of the Warrior Cop?

Skewering “the Pretense of Knowledge” in the Financial Realm

Alex Pollock punctures the mystique of the “experts”— including the Fed, “an independent governmental fiefdom of alleged Platonic economic guardians.”