It is impossible to exaggerate the enigma within the term “capitalism.” It is in fact one of those big concepts concocted by its enemies, indeed by its chief antagonist Karl Marx. To this very day its central concepts of market and “trickle down” are questioned from the American president to the pope. Even its supporters cannot agree on what it is or even when it began. Marx targets the 14th Century as the end of feudalism and rise of capitalism. However, many proponents point later, some to the Renaissance (15th-16th Centuries), and others to the Reformation (16th Century), the Enlightenment (17th Century), or even the beginnings of the Industrial Revolution (18th Century).

Marx’s capitalism emerges from a long feudal conflict between lord and serf that ends with owners exploiting workers. Somewhat dismayed at capitalism’s longevity, Marx was certain of its final fall. But capitalism’s rise is expressed in a surprisingly positive way: “serfdom had practically disappeared in the last part of the 14th century. The immense majority of the population consisted then and, to a still larger extent in the fifteenth century, of free peasant proprietors, whatever was the feudal title under which their right of property was hidden” (Capital 1:27). It was the fact that the serfs had wrested more and more freedom over their own labor from the lords that allowed the new capitalists to attract the freed labor to create “more massive and colossal productive forces than have all previous generations together” (Communist Manifesto).

Surprisingly little systematic data has been available to document when capitalism’s productive forces first arose or why. Angus Maddison’s study for the Organization for Economic Cooperation and Development, Historical Statistics for the World Economy, has now collected the best estimates available to evaluate this. Political scientist Tom G. Palmer in his book After the Welfare State uses this to trace “the sudden and sustained increase in income” of Europe’s capitalist take-off from the rest of the world to “around the middle of the eighteenth century,” using the following chart to make his point most dramatically:

The big spike in wealth comes first from Western Europe beginning in the years just before 1800, as Palmer claimed, but even more from the dramatic rise of the upstart United States a few years later, shooting past its mother country and all of its European rivals to new heights of wealth. By World War I, Eastern Europe began its take-off, followed by Japan, although both of these remained well behind the U.S. and Western Europe. India, China and even Africa begin rising in the 1950s but only today to well below the point the U.S. had achieved back in 1900. 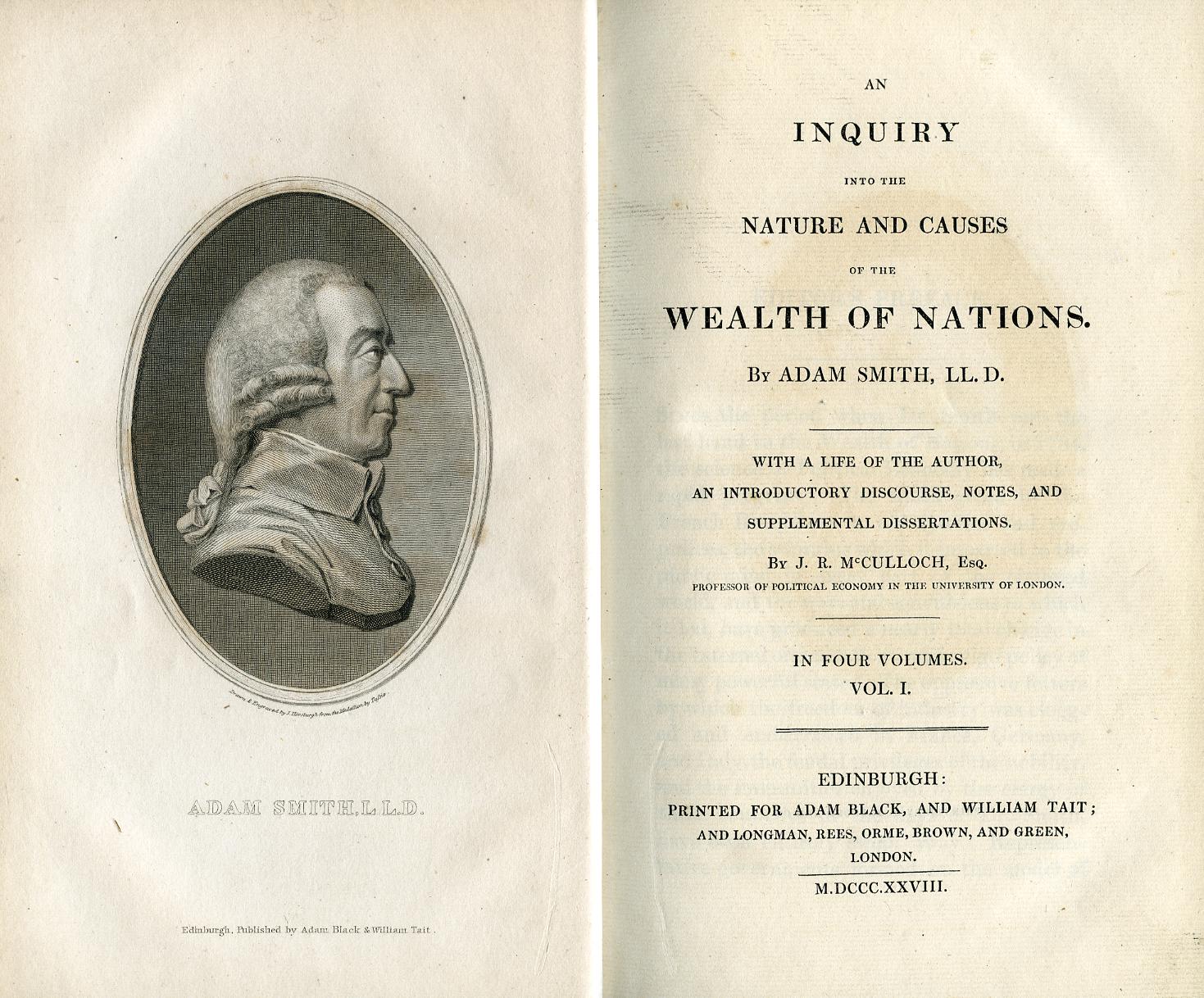 Since Palmer finds the mid-18th Century the critical period for the economic takeoff, he ascribes Adam Smith’s The Wealth of Nations in 1776 and his classical liberalism generally as the beginning of capitalism, market freedom, and modern prosperity. Yet, the man who did perhaps the most to revive the glories of capitalism and classical liberalism in modern times, F.A. Hayek, had stated as early as his magisterial Constitution of Liberty that the rise of these institutions and especially the central idea of rule of law were rooted back in the Middle Ages. Even Palmer conceded that it took time to create the necessary “legal orders characterized by well-defined, legally secure, and transferable property rights, with strong limitations on predatory behavior” that undergird capitalism and long preceded the 18th Century.

In How the West Grew Rich, Nathan Rosenberg and L.E. Birdzell traced the beginnings of the legal order underlying capitalism back even further than did Marx, to the 13th Century, or earlier. In his most careful consideration of the records from the period, An Age of Transition: Economy and Society in the Later Middle Ages, University of Leicester’s Christopher Dyer identified the critical period as the 12th Century, although he too points to earlier foundations. Jean Gimpel’s The Medieval Machine: The Industrial Revolution of the Middle Ages among others traces the rise in wealth and population to the invention of scientific agriculture and water power manufacturing at Cistercian monasteries and bourgeois firms whose accomplishments are recorded in the Doomsday record book of 1086 and the rise of banking in Italy during the same period. Harvard Law Professor Harold Berman’s comprehensive Law and Revolution meticulously traced the necessary legal and moral developments to Cluny Abbey and the Hildebrand papal reforms of the 9th Century.

The OECD data can actually help settle the matter. The chart focusing on this period is provided by JP Morgan’s Michael Combalest and The Atlantic’s Derek Thompson and follows below.

These data suggest that the economic take-off for capitalism actually does date as far back as the 9th or 10th Century, relatively early in the Middle Ages. It is apparent in the Palmer chart too but obscured by its larger scale of intervals. This first Western lead was followed by another rise in the 16th Century and then culminated in the dramatic 18th Century increase emphasized by Palmer when the U.S. and the Europe took off again to even higher levels of prosperity.

Many moderns reject so early an initial take-off as a myth. Palmer attributes it to a “common yearning for a past ‘golden age,’ a yearning that is still with us.” He takes credit that his “classical liberals have persistently worked to debunk the false image of the past—common to socialists and conservatives alike, in which happy peasants gamboled on the village green, life was tranquil and unstressed, and each peasant family enjoyed a snug little cottage.” Yet, intellectuals generally have labeled this period as “dark” rather than golden. Voltaire could only proclaim his a new era of “enlightenment” if all before it had not been dark (conveniently ignoring that such as Newton and Galileo built upon 14th Century innovators such as Bradwardine and Oresme). Similarly, Reformation intellectuals could not have “reformed” if what went before had not been decadent. Even post-Trent Catholic intellectuals wished to forget the period once embarked on in their Counter-Reformation. No one had an interest in an inventive and prosperous medievalism.

The Wall Street Journal/Heritage Foundation empirical Index of Economic Freedom show these early roots still run deep. Of the 35 nations rated in the top two “free nation” or capitalist categories, 57 percent are European or, like the U.S., are former colonies with predominant European culture and populations. Even among the 15 non-European nations most were European colonies or protectorates for substantial periods of time, Hong Kong for a century. Mauritius was unpopulated until occupied by the Portuguese and Dutch. Japan did not achieve widespread prosperity or freedom until after U.S. occupation. Taiwan had no direct European control before achieving economic freedom and prosperity but its free market reformers were Western influenced. The others are all very recent additions.

In a column, Fareed Zakaria contended that “historically the key driver for economic growth has been the adoption of capitalism and its related institutions and policies across diverse cultures,” citing India and China as diverse (non-Western) nations that have made the transition. Yet, India is 119th on the worldwide economic freedom list, considered “mostly unfree,” and China is in the same category listed at number 136. And, as the charts demonstrate, they lag economically. Yes, these have seen major growth as they have adopted some market reforms but they are still mainly poor and not very free. The twelfth highest rated economically free nation is Bahrain. Its economy has many free market elements that allow it to prosper. But it is a centralized Sunni monarchy that was forced to call in Saudi troops in 2011 to quell a restive Shia majority popular uprising. Even Hong Kong is straining under increasing mainland Chinese control, including dictating textbook content. Singapore has only a quasi-free political system, threatened by Chinese, Malay and Muslim conflict.

How comfortable can one be that nations that have not cultivated the related cultural institutions can remain economically free and capitalist? After all, Mali was once rated rather free but is now in chaos. Mr. Zakaria’s quote has a major qualification – it was not only accepting capitalism that was essential but also adopting the West’s “related institutions” – the ones Hayek and the others found took hundreds of years to develop before capitalism could take root.

If today’s prosperity can be traced merely to the rise of rational enlightenment, scientific materialism, skeptical rationalism, idealist romanticism or even classical liberalism alone, some technical solution is possible to create and sustain capitalist systems. If earlier customs, beliefs and institutions are essential, capitalism is extremely problematic. New capitalisms will be extraordinarily difficult to form and maintain. Existing ones may not be able to survive the loss of the traditions. The first European state to rise economically, Italy, has fallen to 92nd on the freedom Index ranking with a mere 0.4 percent economic growth. The Index has removed the U.S. from its highest free category for the past three years as a result of restricting contract rights in the Chrysler, GM and finance nationalizations and its growth has fallen to below two percent.

Marx identified the roots of the capitalist order more accurately than many of those who have defended it. Might he likewise be a better prophet to its end? While his economic predictions seem far off, his cultural ones hit home: capitalism “has put an end to all feudal, patriarchal, idyllic relations. It has pitilessly torn asunder the motley feudal ties that bound man to his natural superiors and he has left remaining no other nexus between man and man than naked self interest, than callus ‘cash payment.’ It has drowned the most heavenly ecstasies of religious fervor, of chivalrous enthusiasm, of philistine sentimentalism in the icy water of egotistical calculation…It has stripped of its halo every occupation…torn away from the family its sentimental veil…All that is solid melts into air, all that is holy is profaned” (Communist Manifesto).

In his magisterial Capitalism, Socialism and Democracy, the great economic historian Joseph Schumpeter in fact suggested capitalism may merely be the final stage of feudalism and that even with all of the market’s efficient calculation it cannot long survive without its supporting cultural institutions.

A Market of Intangibles

Exploitation on the Market?

As with Adam Smith’s tradesmen, we don’t want a fully cartelized economy. We want to cartelize our part of the economy

A Marxist Historian Offers a Counter-History of Liberalism