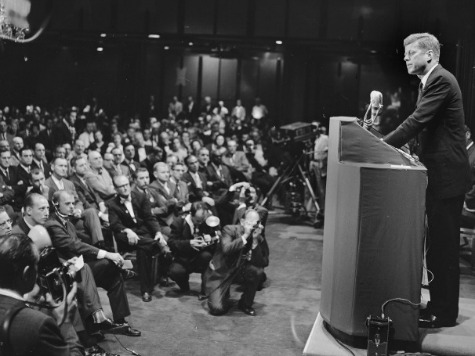 In fact, Kennedy’s insistence on a strict separation of church and state has been relentlessly attacked by many who felt he privatized religious belief and thereby undermined its influence on civic life. He also declared that he would resign public office, if performing its duties would violate his conscience. But Kennedy’s renowned September 12, 1960 Houston speech to Protestant clergy cannot be understood without looking at authoritative Papal pronouncements on religious liberty, conscience, separation of church and state, and democracy.

Seen in this pre-Vatican II light, Kennedy’s response becomes more understandable. In fact, it is possible that, contrary to critics such as Archbishop Charles Chaput, Fr. John Courtney Murray, and Professor Michael McConnell, Kennedy’s privatizing of religion played a role in the Vatican II reforms on religious liberty.

The pre-Vatican II Church seemed to view the political world through opposition to the French Revolution—see Tocqueville’s Introduction to Democracy in America. But instead of obsessing on the threat that violent, atheistic republicanism posed, American Catholics viewed the political world from the perspective of what the Declaration of Independence offers the world. Fr. John Courtney Murray’s 1960 classic, We Hold These Truths: Catholic Reflections on the American Proposition, articulated this American perspective cogently.

Kennedy critics seem to brush past this important distinction and dwell instead on his formulaic embrace of “separation of church and state.” Even before Philip Hamburger exposed Justice Black’s appropriation of Jefferson’s phrase as a likely legacy of his past membership in the Ku Klux Klan, contemporary critics of the Democratic Party’s candidate for President such as historian William Lee Miller scoffed that he was more a separationist than the Baptists. On the fiftieth anniversary of Kennedy’s remarks, distinguished legal scholar Michael McConnell maintains that “Either [Kennedy] must have been misleading his audience, or he was embracing a radically secularist visition [sic. “vision”] of the First Amendment more akin to French (link no longer available) laicite than to American pluralism.”

But McConnell underestimates the charges that Protestants and others might bring to bear on Catholics. Take for example this editorial from The New Republic, which concludes its attack on a meeting of American Catholic cardinals, “No church today can hope for survival if it provokes against it the forces of modern civilization.” Earlier the editorial argued that “A Rome such as this is out of harmony with the needs of the modern state. It is constituting itself visibly and consciously the barrier to our progress. It looks for its truths in the past.” This editorial comes from its September 2, 1916 issue, whose editor then was key Progressive thinker Herbert Croly.

The abiding opposition between a Darwinian or evolution-based Progressivism and the Catholic Church remains evident today, in the HHS mandate. There is, moreover, little distance between the century-old New Republic’s fear that the Pope’s “subjects are in the same position as those mistaken Germans who have viewed the United States as a colony of their fatherland” and the anxieties of the Houston ministers 50 years ago. Such accusations of disloyalty were intensified in Paul Blanshard’s 1949 best-seller American Freedom and Catholic Power (2nd edition, 1958), which was endorsed by establishment reviewers, including prominent figures such as John Dewey.

While Kennedy’s conservative Catholic critics today focus on his anodyne prepared remarks, the most effective portion of the meeting was in the questions and answers, where he could confront his accusers. The speech ran around 10 minutes, the questions took up almost 30. Kennedy’s speech to set up his responses, which succeeded in impressing a national audience with his poise and his wit, if not his arguments.

The questioners wanted to expose Kennedy as a minion of the Church and ultimately of the Vatican in his official as well as his private life. Thus, the ministers tested his belief in Papal pronouncements, hoping to force him to choose between loyalty to his church and to his country. He evaded the traps set for him by reverting to the separation position, rather than relying on Papal authorities such as Pope Pius XII’s Christmas message of 1944, which he could have cited as more democratic and friendlier to religious liberty than other authoritative writings. Clearly, Kennedy did not want to appear controlled by the Vatican in any respect.

He even appeared to dismiss the various encyclicals as statements addressed to foreigners—encyclicals are Papal messages to audiences of bishops. (Previous Catholic presidential candidate Al Smith reportedly said when asked about an encyclical, “What the hell is an encyclical?”) The only clerical authority Kennedy cited was a 1948 statement by American bishops, which does not separate church and state, as he claimed, but actually relates them through an articulation of natural law.

Though the Kennedy encounter may remind us of the Gospels’ accounts of zealous clerics attempting to trap Jesus, one can defend the Protestant ministers’ questions. Their citation of 19th century documents and charges of potential disloyalty may sound bizarre today, but in fact, as McConnell allows, “At the time of Kennedy’s speech, a number of Vatican pronouncements condemning church-state separation were still extant and theoretically authoritative [!], even though many Catholics, especially in America, regarded them as anachronistic.”

In considering some of these “theoretically authoritative” pronouncements, one is struck by their distance from the modern world—for both good and ill. Pope Gregory XVI’s 1832 Mirari Vos condemns “liberty of conscience,” freedom of the press, and separation of church and state. A “single evil” has caused the decline of powerful nations—“immoderate freedom of opinion, license of free speech, and desire for novelty.”  Pope Leo XIII gave some clarifications in Immortale Dei (1885) and Libetas Praestantissimum (1888).  Yet these would not nullify Leo [sic Pius] IX’s Syllabus of Errors (1864), which include the error of holding “In the present day it is no longer expedient that the Catholic religion should be held as the only religion of the State, to the exclusion of all other forms of worship.” In fact these and other Papal statements offer well-grounded distinctions between liberty and license and between governments based on natural law and those on willfulness. The Popes also maintained a complementarity of philosophy and revelation that even an atheist would appreciate, as Juergen Habermas today would allow. But many statements from these encyclicals would find little sympathy with Americans, Protestant, Catholic, or Jew, who are born free, believe they own themselves, and honor religious liberty for all.

Perhaps Kennedy’s dilemma is best portrayed by another critic, Archbishop of Philadelphia Charles Chaput, in his splendid history Render unto Caesar: Serving the Nation by Living Our Catholic Beliefs in Political Life (2008).  Oddly, his treatment of Kennedy’s 1960 remarks comes after a lengthy praise of the 1965 Vatican II reforms, which culminates his discussion of the statesmanship of Bishop John Carroll, Tocqueville on religion and politics, and an intriguing tale of Fr. John Courtney Murray’s relationship with the Church hierarchy prior to Vatican II. Chaput notes the reconciliation of previous Church teaching with religious liberty in Pope Paul VI’s 1965 encyclicals, on relations with other religions, particularly Jews, in Nostra Aetate, on his Declaration on Religious Freedom, Dignitatis Humanae, and on the Church’s “solidarity with the whole human family” in Gaudium et Spes.

Chaput’s presentation makes it appear that he is criticizing Kennedy for misinterpreting Vatican II, rather than struggling to reconcile the pre-Vatican II Church with American democracy. Moreover, Chaput is well aware of the Church’s heavy hand: While citing Murray as a critic of Kennedy, he also reports that “Murray’s superiors in Rome ‘suggested’ that he cease writing” in advocating the American model of religious liberty. And he obeyed. But fortunately Murray eventually did participate in the Vatican II deliberations and “played a key role in drafting … a decisive statement by the council on religious freedom.”

Is Chaput using Kennedy’s errant privatizing of religion as an example of why the Vatican II reforms were necessary? Vatican II invited democratic Catholic politicians to remain Catholic as they vigorously participated in a public life that might be dominated by non-Catholics. Should they not use the principles of religious liberty and natural law to advance the teachings of the Church? After Vatican II the Kennedy evasions would no longer be necessary. Unfortunately, many Catholic democratic politicians, along with many others, seem to have drawn the wrong lessons. Vatican II could use its own syllabus of errors.

Vatican II can be understood as a Tocquevillean moment of democratic self-knowledge. It represents a transcendence of a European world that had focused politically on 1789 and its violent secular republicanism. Likewise, Vatican pronouncements on issues such as capital punishment and free markets would benefit by looking beyond the Old World perspective. The Church now embraces the religious liberty principles of 1776 and the Declaration of Independence and the ensuing government of the people, by the people, and for the people.

The Limits of James Madison’s “Memorial and Remonstrance”

I come not to argue that we are ill-founded with regard to religious liberty, but to note certain limitations of principles present at our founding.

When Thomas Jefferson Read the Qur’an

One has to conclude that regarding Jefferson’s affinity to Islam and his possible inspiration from the Qur’an, there is no there there.