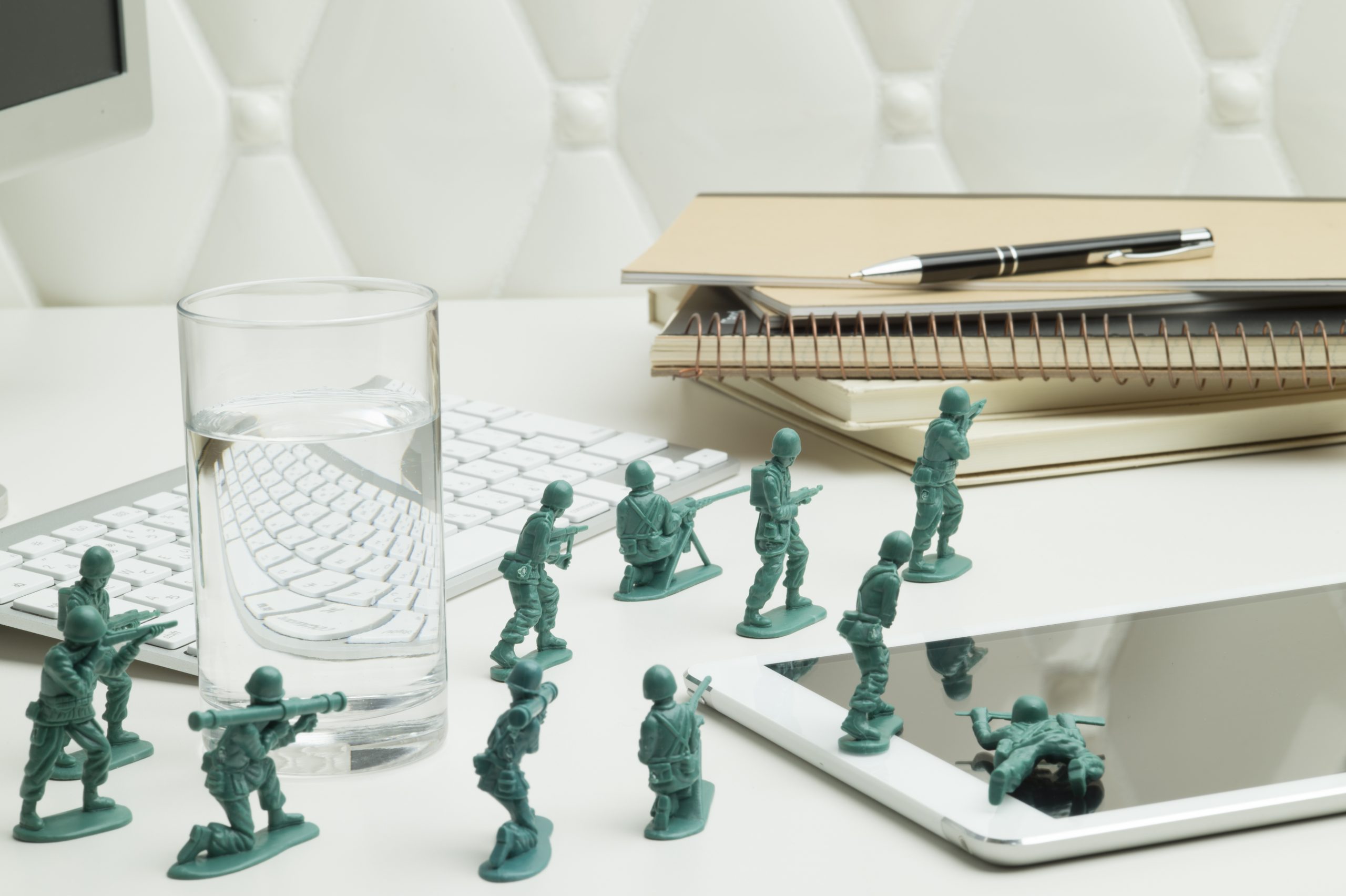 It was supposed to make consumers happy. Last month, Target launched a line of clothes designed by Lilly Pulitzer. Within hours, however, things turned ugly. Customers flooded the stores and cleared the shelves. The story online was the same, a torrent of early sales caused Target’s website to crash and supplies to vanish. Shoppers who came up empty-handed fumed when Target announced that it would not restock the clothing line. The anger only increased when items from the limited-edition collection began popping up on eBay for several times the prices they were offered at Target.

Who would have guessed, the media wondered that the designer of preppy resort wear could cause so much trouble?

René Girard, for one.

Girard, the French-born literary critic and anthropologist, is the author of several books on “mimetic theory,” the notion that our deepest desires and passions are neither biologically determined nor the product of human nurturing. They are instead borrowed from others. Human beings are great imitators, Girard argues. We want what others want—be it admission at top-ranked schools, real estate in the best neighborhoods, or flowery Lilly Pulitzer swag.

The consequences of our mimetic desires are positive and negative, Girard writes. On the positive side, they are responsible for the spirit of competition that spurs economic and scientific growth. On the negative side, Girard sees violence as the product of mimetic rivalries, the tendency to imitate one’s transgressor by retaliating with hostility. Mimetic conflicts have no natural stopping point.

What Girard is talking about, in short, is vengeance. In The One by Whom Scandal Comes, a neat summary of his work published in 2014, he writes that vengeance “succeeds in spanning generations and encompassing the world.” It “transcends time and space. One should not be surprised that in the ancient world vengeance was taken to be sacred.”

Girard’s discovery of the origins of human violence led him to embrace Christianity. “Satan casts out Satan,” he notes, quoting Jesus. God takes a different approach. Rather than responding to violence in kind, Jesus commands that violent persons must be disobeyed. We must “turn the other cheek.”

According to Girard’s exegesis of this famous section of the Sermon on the Mount, the point Jesus was trying to make is that the world actively invites violence. That is why the examples that Jesus uses are so drastic. Jesus refers to someone who slaps a person without provocation and who sues a person for his tunic, which at the time was among the few articles of clothing that people owned. Conduct of that sort can only be motivated by something more than what meets the eye. What the aggressor really wants is to draw us into an endless cycle of violence.  “Only the conduct enjoined by Jesus” offers an exit strategy, maintains Girard.

René Girard, now 91, may have remained an obscure figure were it not for a billionaire former student, Peter Thiel. Thiel, a co-founder of PayPal and the first outside investor in Facebook, deeply imbibed Girard’s basic insight that competition is imitative. In Zero to One: Notes on Startups, Or How to Build the Future (about which John O. McGinnis and Peter Lawler have posted previously), Thiel says most business rivalries resemble Romeo and Juliet. “The two houses are alike, yet they hate each other.”

Thiel’s business philosophy is a thorough working out of Girard’s anthropology. Thiel argues, for example, that competition is most often a losing proposition for the competitors. Among mimetic rivals in business, it drives down prices and eats away profitability. And among mimetic rivals within the same company, it breeds needless jockeying for the top job.

“Competition,” Thiel wrote in the Wall Street Journal, “is for losers.”

Wanting to nip self-destructive rivalries in the bud, Thiel counsels start-ups not to mimic their competition. He reportedly advised LinkedIn to redesign its website early on to look less like Facebook. While running PayPal, Thiel gave each of his employees a singular task to avoid head-to-head conflicts. Companies are better formed, in Thiel’s view, by friends who enjoy each other’s company and share a unique idea, than by type-A loners who just want to improve upon what everyone else is already doing.

Outside of business, Thiel is a Girardian. He is currently giving talented students $100,000 each to forgo college for two years. The rationale behind the gift is that many undergraduates go off to college out of a borrowed desire to attend; they would, he thinks, be better off considering alternatives.

Also like his former teacher, Thiel is Christian, as he recently discussed in this engaging conversation with Anglican bishop N.T. Wright, moderated by New York Times columnist Ross Douthat. “God does not try to be our rival,” Thiel says elsewhere. In light of his distinctly negative take on rivalry, this statement amounts to a strong affirmation of the entrepreneur’s belief in God’s benevolence.

There is a constitutional application to Girard and Thiel’s thesis. One could say that the religion clause of the First Amendment reflects a concern for the downside risk of mimetic rivalries among churches. The Framers, after all, took to heart Montesquieu’s warning that:

In 1772, Benjamin Franklin observed that this phenomenon had played out in the American colonies. He wrote that the Church of England

blamed persecution in the Roman church, but practiced it against the Puritans: these found it wrong in the Bishops, but fell into the same practice themselves both here and in New England.

During the ratification debate in North Carolina, future Supreme Court Justice James Iredell noted that the animosity among churches caused by the establishment of one as the official denomination of the state led to “wars of the most implacable and bloody nature . . .  in every part of the world.” Iredell insisted that “putting all sects on a level” is “the only way to prevent persecution.”

Founding-era legal documents exhibit a similar recognition that religions can turn hostile when locked into competition. Virginia’s declaration of rights provided that religion “can be directed only by reason and conviction, not by force or violence.” New York’s constitution protected against “spiritual oppression and intolerance.” Massachusetts’s plan of government guaranteed that no one “shall be hurt, molested, or restrained” from exercising religion.

The non-establishment and free exercise clauses of the First Amendment supply dual structural restraints against the prospect of mimetic religious rivalries. The establishment clause foreclosed the possibility that denominations would compete to be the nation’s official church. As Thiel points out, winner-take-all contests in business are lethal. The Founders wisely reached the same conclusion with respect to the pursuit by religious denominations of exclusive state privileges.

The free exercise clause worked on the supply side. As Adam Smith noted in the The Wealth of Nations, religious convictions are

altogether innocent where the society is divided into two or three hundred, or perhaps into as many thousand small sects, of which no one could be considerable enough to disturb the public tranquility.

Taking a page from Smith, James Madison explained that free exercise produced a self-regulating system. For Madison, denominations worked much like political factions—the “interests checking interests” of Federalist #10—that preserved the common good in large republics. Where there is religious pluralism, “there cannot be a majority of the people of any one sect to oppress and persecute the rest,” he asserted.

Legal commentators in the immediate aftermath of ratification understood the value of religious freedom within American constitutionalism. In 1803, St. George Tucker offered a robust defense of free exercise:

Liberty of conscience in matters of religion consists in the absolute and unrestrained exercise of our religious opinions, and duties, in that mode which our own reason and conviction dictate, without the control or intervention of any human power or authority.

The eminent jurist recognized that religions might also come into conflict with secular movements.  In such situations, commonplace now, the best approach is the one suggested by Girard, Thiel, and the Framers: Avoid a zero-sum solution at all costs.

The Common Law: Ginsburg Gets It Wrong

A Fistful of Federalism, Part II

Remote voting and a more “transparent” Court would likely lead in directions the founders explicitly sought to avoid.