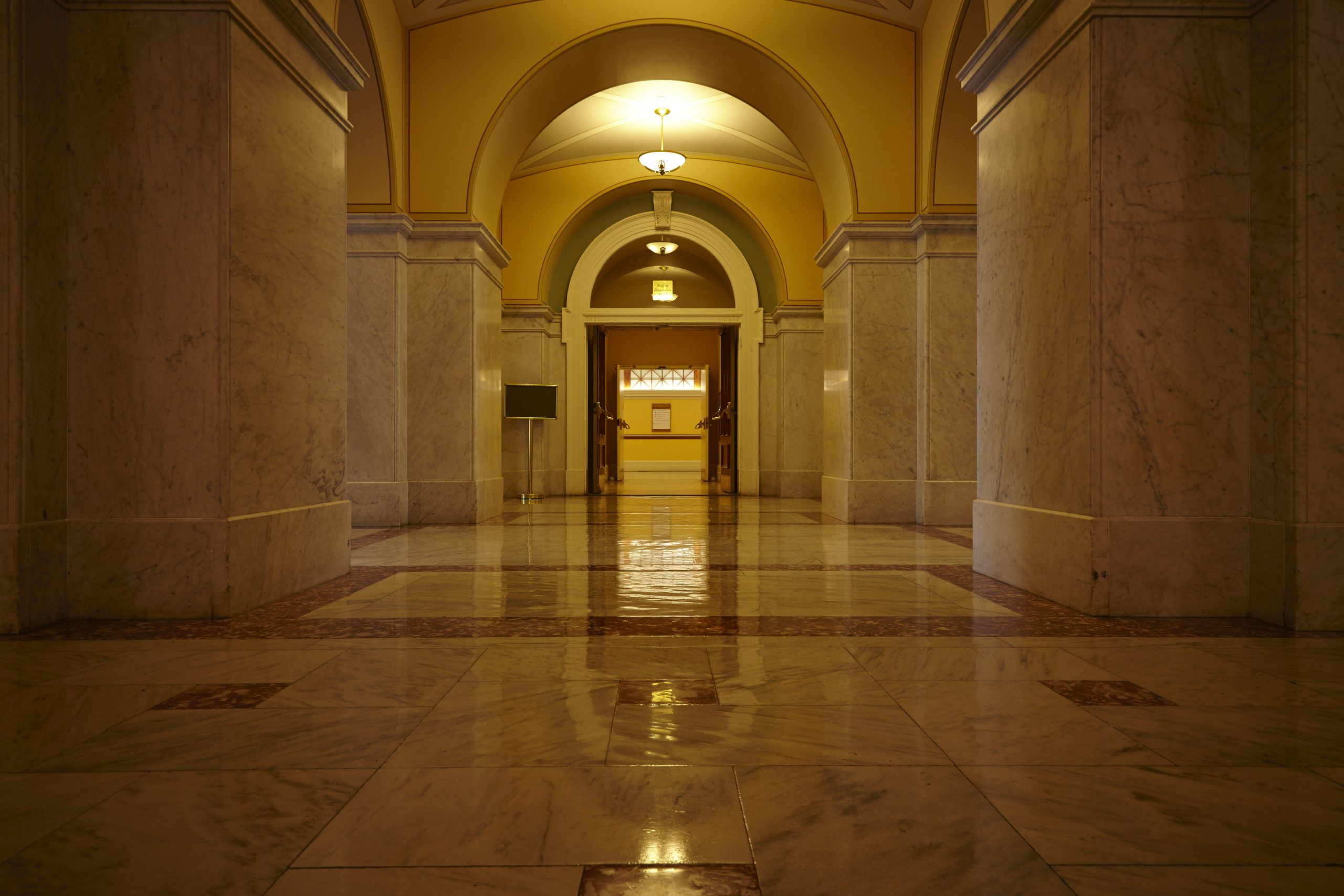 Our Constitution makes Congress the first branch of government, but the Capitol is today regarded almost as a house of ill-repute, both for the character of its members (not necessarily ours, but theirs) and its general contribution (or lack thereof) to the national well-being.  As a legislature, its primary means of asserting itself must be to pass legislation, but it has become infamously inept in that work in this age of severe polarization and powerful interest groups happy to block changes to a status quo they find lucrative.  Given the apparent permanency of these underlying factors, many observers now see the waning of Congress’s importance as both inevitable and unequivocally desirable.

In his new book, Congress’s Constitution, Cornell legal historian Josh Chafetz persuasively shows that this increasingly fashionable view of Congress is wrong: historically ignorant of the ways in which Congress and its legislative predecessors have asserted themselves, and normatively oblivious to the importance of such assertions in the overall constitutional scheme of separated powers.  Chafetz shows how Congress’s powers go well beyond legislation. They encompass the “hard” (coercive) powers of the purse, personnel (both through advice and consent and impeachment), and contempt, as well as the “soft” (attractive) powers often seen as mere housekeeping details but actually crucial to regulating the terms of political debate, disciplinary powers over members, and cameral rule-making powers.  Together these powers furnish Congress with “a potent toolbox” it has historically shown the ability to use “judiciously” to gain the public’s trust, though by no means has it always done so.

In six neatly organized substantive chapters, Chafetz takes up each of these categories of powers and shows their historical development—most often from roots in the 17th-century conflicts between Stuart kings and British Parliament, through the American colonial legislatures and Continental Congress, and into our own Constitutional history, from the early Republic all the way through to the present.  Chafetz’s presentation of this material is masterful, pitched so as to be accessible to the novice and yet genuinely informative even to the expert.  Indeed, congressional staffers trying to understand the current state of play on legal topics ranging from the possible objects of Congress’s contempt power to the propriety of defunding individual government officers’ positions to the lawful disclosure of state secrets could profit greatly from reading Congress’s Constitution.

Chafetz has a real talent for making long-forgotten battles spring to life as part of an unbroken power struggle spanning centuries.  Peter Wentworth’s push for unrestrained free speech for Parliament under Queen Elizabeth I is connected to Senator Mike Gravel’s publication of the Pentagon Papers in a way that seems altogether natural.  As he works through this material, it is a pleasure to watch Chafetz evenhandedly but mercilessly rebut numerous contemporary cries that some legislative practice is “unprecedented.” He does this by showing that, for example, legislatures actually have withheld (or threatened to withhold) appropriations as a means of gaining policy leverage all the way back to the time of Oliver Cromwell, and frequently did so as a means of contesting royal governors in 18th-century America.  Chafetz’s historical grounding means he is not easily scandalized by contemporary parliamentary tacticians, and indeed he clearly has some degree of admiration for legislators who seek to invigorate Congress through whatever means they find at hand.

Chafetz embeds his rich history into a rather flexible theoretical framework.  In its stuffiest formulation, the theory holds: “Political power is largely endogenous to politics.”  That is, our Constitution does not fix institutional powers in place for all time.  Instead, our separation of powers regime is a decidedly fluid one, in which the actors’ ability to make a good showing of their parts before the engaged public determines the potency of the tools at their disposal and the overall standing of their respective institutions.  In our “multiplicity-based,” non-hierarchical separation of powers, both trust and power flow out of a dialectical engagement between government’s separate institutions and the public.

Chafetz sometimes makes it sound as if this way of thinking is brand new, which is puzzling, considering the resemblance it bears to the (strangely unmentioned) work of Keith Whittington and Michael Stokes Paulsen, among others.  A few times he also seems to suggest that he is offering a genuinely explanatory theory, but more often he is clear that he is offering the historian’s typical wisdom: it depends.  I find the modest theoretical ambitions to be a strength of the book, but tastes may vary on this score.

Congress’s Constitution is not shy about pitting its own view of a potent and (potentially) worthy Congress against prominent skeptics, and in doing so it lands some solid punches.  Against the idea that a “Separation of Parties” has now supplanted the separation of powers, most forcefully advanced by Daryl Levinson and Richard Pildes, Chafetz points out a number of ways that 21st century congresses have asserted their powers that do not align with partisanship: Republicans refusing to entertain President George W. Bush’s push for Social Security private accounts; the Senate’s continuing insistence that arms control treaties be submitted for its ratification; the House’s policing of the Origination Clause with “blue slips.”  Chafetz reminds us that a wise Congress seeks out interbranch conflict judiciously rather than indiscriminately, and that intraparty cooperation across branches in some political environments is hardly proof that a whole range of other relations has become impossible.

What of those who insist that Congress is properly viewed as obsolete in the modern age, too slow and weak to contend with the bigger, more unified, and more flexible executive branch?  Statements of this position, including Adrian Vermeule and Eric Posner’s The Executive Unbound and William Howell and Terry Moe’s Relic, often emphasize that a dominant executive branch is not to be understood as a necessarily imperial or unconstrained one.  Rather, politics will serve as the effective check.  Chafetz points out the basic fallacy in this thinking: far from running in a separate channel from the Madisonian separation of powers, politics under our constitution is decisively structured by that separation, with congressional agenda-setting powers crucial to determining the shape of conflict.  Were Congress to permanently recede, the executive branch would be left to structure its engagement with the public entirely on its own terms, which would seriously impair accountability and possibly also the government’s ability to successfully legitimate itself.

Chafetz is less effective, however, in meeting the more general challenges of justifying Congress and explaining how it might recover some of the legitimacy it has clearly lost in recent years.  As a closing chapter, he offers a rather clipped brief in favor of Congress’s importance and particular virtues.  He gestures in some promising directions, including defending Congress’s importance to a politics that “is our peaceable means for dealing with deep and persistent conflicts” in a “diverse political community.”  But he is mostly operating on faith here rather than presenting evidence.  As an example of Congress promoting “interbranch deliberation” that usefully educates the public, he points to Congress’s performance in the confirmation hearings of Robert Bork, without addressing clearly what makes an argument a useful one, or what cost in terms of heightened partisan animosity might be worth paying for the benefit of a robust political debate.

Chafetz avoids undertaking a sustained assessment of why Congress is failing to live up to its best self, and that is a shame.  He rightly points out that we have seen Congress rather meekly acquiesce in the diminishment of funds subject to annual appropriations, thereby ratifying a major shift in the constitutional balance of power—but does not probe the sources of that meekness.  He could well have added that by increasingly relying on continuing resolutions, rather than passing annual departmental appropriations,  Congress’s abdication has become even more nearly complete, and the discipline that its power of the purse is supposed to provide is a distant memory. He does not much consider whether the incentives facing individual representatives may have shifted over time, thereby making it less likely that the legislators of the 21st century will play the constructive, combative role he envisions.  And, having bracketed off Congress’s legislative function at the outset of the book, he does not return to it in his big picture thinking about Congress, which is a bit frustrating.  It would have been nice to see Chafetz engage the work of one of his mentors, Guido Calabresi, who in A Common Law for an Age of Statutes tried to envision ways in which Congress and the courts should be adapting our system of separated powers to a governing regime made qualitatively different by many decades of legal accumulation.

But this is an awful lot to ask for from one book.  In the main, Chafetz’s decision to restrict his attention to Congress’s non-legislative powers makes his book a very refreshing take on the institution.  His ability to take the very long view of the legislature’s place in the separation of powers gives him a perspective on its potential sorely lacking from our normal amnesiac debates about congressional dysfunction.  He has offered a constructive framework for thinking about congressional rehabilitation, and it remains for others to convert it to an actionable plan.

Limiting the Judicial Power of Agencies

We need a system of administrative law courts that are independent from bureaucratic control.

Democratic Persuasion and the Weakness of Social Democracy

Democracy is subject to many forms of persuasion, within and without: this should be cause to give central governments less power, not more.