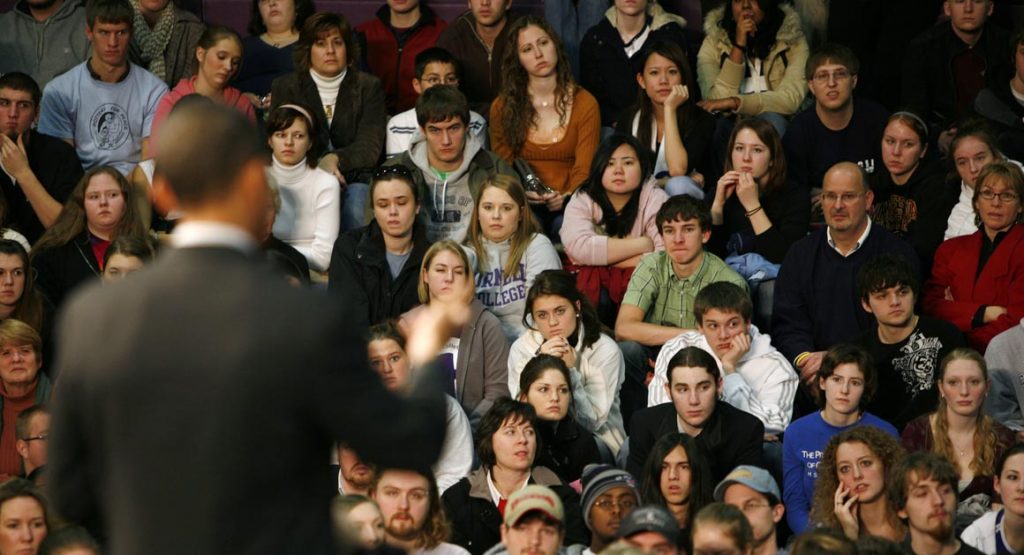 When a political movement changes labels, that usually means its adherents are unelectable.

Take the Democrats in 2004. When the presidential candidacy of Massachusetts Senator John Kerry, a liberal protégé of the state’s senior senator, Ted Kennedy, went down in flames, their party almost immediately switched from the buzzword “liberal” to “Progressive.” Not only was this changing the subject, it was reaching for the latter term’s historically bipartisan connotations. The Democrat Woodrow Wilson had been adapting himself to a doctrine first put into circulation in national politics by a Republican, Theodore Roosevelt.

The initiators of the change in emphasis, Democratic consultants Paul Begala and James Carville, declared that the Democratic Party needed to reexamine itself. But then it turned out that the new label was only semantics. Four years later, Barack Obama, despite running from the center, showed that when off teleprompter (advocating spreading the wealth), he was very much in sync with his predecessor candidate. By the 2012 election, he no longer even donned the camouflage, but ran as an unapologetic liberal.

One could argue that in The Conservatarian Manifesto: Libertarians, Conservatives, and the Fight for the Right’s Future, the National Review writer Charles C.W. Cooke has tried the same trick, in which the ideology remains the same but travels under false colors. Is Cooke’s embrace of a new form of Republicanism, “conservatarianism,” real?

Today, establishment Republicans masquerading as conservatives offer the following recipe for staving off a third consecutive defeat come 2016: purge the “extremist” Tea Party from the ranks, embrace minorities, and avoid unpopular stances on social issues. Whatever the merits of this advice, and unlike what was true of the Democrats in 2004, this new animal, the “conservatarian,” was not born of election losses. It emerged as an expression of conservatives’ and libertarians’ disaffection with President George W. Bush a full year before the 2008 election.

That is to say, it is substantive.

Cooke’s account is not cynical or superficial like Begala and Carville’s post-2004 election analysis. Nor is it the full-throated roar so common to rightwing books headed for bestseller-dom. President Obama is not caustically called Barry in these pages. (He makes only spectral appearances, and when present, is only blamed for accelerating the big government policies of George W. Bush.) The Conservatarian Manifesto looks to be a hit despite that Cooke is not trying for that “Pavlovian relationship between these authors and their eager customers” which Andrew Ferguson noted a while back.

Cooke is both nuanced and tough. Like George Orwell, he is harder on those on his side than on his opponents. Libertarians can be “unreasonably ideological and unmoored to reality.” They fail to take into account the way “rights are used.” Conservatives don’t adapt to “new social and economic realities,” and instead cling to solutions from an inapplicable “particular time.” Tea Partiers, while being “independent-minded and ruthlessly effective,” are akin to the Occupy Wall Street movement in cherishing ideological purity over “tangible success.”

The author’s way of mediating between the conflicting stances of conservatives and libertarians is to emphasize the latter. Unlike others on the Right, he does not argue for a resurrection of Reaganism. The only thing he takes from our 40th President is his definition of conservatism as essentially libertarianism. Cooke boils down his electability message to three main issues: smaller government, the free market, and individual rights. This, he argues, is a big enough tent to house libertarians and conservatives.

But his target group is not just “conservatarians” disgusted by the status quo as determined by the much-lampooned RINOs (“Republicans In Name Only”). He also wants to reach the millenials. Occupy Wall Street’s failure to endure indicates that young Americans are capitalistically inclined, desiring consumer goods and low taxes. (Perhaps he’d concede that in this respect he does pine for a new Reagan, for the Gipper was gifted at appealing to youth.)

Cooke has done his homework on Barack Obama’s victories, and the key role played in them by younger voters. Once upon a time, independents were regarded as the group that put the candidate over the top. While still important, they are no longer enough (independents favored Romney over Obama by a margin of two to one). It was the idealistic youth who gave Obama electoral success.

Following in that line, Cooke recasts concepts for the millenials. The U.S. Constitution is a “radical framework,” the result of the most successful revolution in history. Capitalism is “a remarkable innovation.” Reducing the reach of government and restoring control to Americans at the state and local level is a radical and empowering idea.

Cooke argues that a policy of leaving the gay marriage issue up to the states can be defended without alienating the younger generation, which overwhelmingly supports gay marriage. It should be framed this way: the federal government’s wielding unwarranted power in the area of marriage means that, on the flip side, it could one day decide to withhold what it has granted. Millenials are thus exposed to a libertarian message they will rarely hear in the groves of academe.

When Cooke declares individuals the “smallest of minorities,” he has given Republicans an electable message.

This book is, as I said, intellectually rigorous. However, because it so studiously avoids spin and (thank God) triangulation, there are areas where it is vague. Such as foreign and defense policy. Senator Rand Paul (R-KY), the libertarian presidential standard-bearer, is extremely cautious about U.S. military involvement and has, unlike conservatives, criticized President Obama’s use of force. Cooke likes this about Paul yet he does not offer the junior Senator from Kentucky as the best candidate to turn to in 2016. His refusal to back Paul or, for that matter, any candidate hints that he may want fresh blood in the race—and also that libertarians need to get their foreign policy act together.

Then, too, The Conservatarian Manifesto neglects realities, such as a grassroots that has in the past been fooled by a conservative message preached by Eastern moderates (Romney) or inside-the-beltway RINOs (McCain). Until idea men like Cooke find a way to educate this base that keeps electing people by whom they eventually feel betrayed—as in the case of the two million social conservatives who stayed away from the polls in November 2012 and helped bring a second Obama term—the Republicans will remain the party of anti-libertarian RINOs.

Looking at Trump from Outside the Bubble

What Libertarians Think About the U.S. Constitution Part II: Strengthening the Federal Government

Is There a Viable Conservative Alternative to Markets?

When conservatives blame markets for illnesses generic to all modern economies, they misdiagnose the cause and therefore prescribe faulty remedies.