Mitch McConnell, Senate Republican leader, confessed to big business bureaucrats that he and other Establishment Republicans want to remain their link to government money and favors. According to a Wall Street Journal story (December 16), he asked them to open their wallets lest his kind be overwhelmed — not by Democrats, but by those smelly little Tea Party conservatives — the real threats to the government spending and regulations by which big business thrives.

The confession was almost that forthright: “said one person at the McConnell fundraiser, held at a Capitol Hill townhouse. ‘The main message he was pushing was: Get involved, mainly to teach those who are primarying incumbents that it is not helpful to run against incumbents who are champions for the industry.’”

McConnell is just one of the dozen Republican Establishment senators who are facing challenges by conservatives, who are backed by organizations such as the Club for Growth and the several pro-life organizations. These challengers, always underfunded by huge margins, nevertheless frighten the well-heeled likes of McConnell because they bring to politics a source of votes that money can’t buy: credible commitment to substance. According to John Boehner, House Republican speaker and a stalwart of that Establishment, such challengers or merely the prospect that they might appear, have convinced many Republican congressmen to pay more attention to issues than to the Establishment’s priorities. 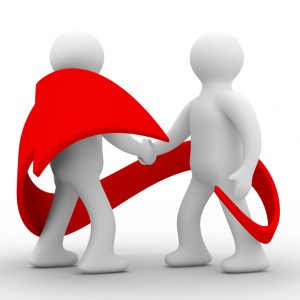 Money is the Establishment’s main weapon against challengers with small bank accounts but big followings based on issues. And indeed, big business is stepping up its defense of threatened Republican Establishmentarians.

Big money is forthcoming from classic sources for classic reasons. The Journal story continues: “The U.S. Chamber of Commerce and other business groups have been stepping in to help business-friendly Republicans aligned with the GOP leadership… a sign of worries that tea party-aligned candidates might try to eliminate tax breaks and spending favored by businesses.”

The bargain is classic, and classically corrupt: Politicians vote taxpayer money to cronies, who then recycle part of the money back to the politicians. The corruption is especially evident in McConnell’s case. He made his confession and plea to representatives of the defense industry, who told the Journal’s reporter that their cooperation with the Establishment against the conservatives was all about mutual support for national defense: more money means more defense. But the corruption inherent in such back-scratching bargains is especially obvious and noxious in the case of national defense.

Consider: In 2013, the military budget is an inflation-adjusted $642 billion. In 1988, in the same dollars, it was $515 billion. Yet whereas in 1988 we had an army of twenty divisions, today we have one of ten “division equivalents” – barely able to handle insurgents armed with improvised weapons. Back then we had a six hundred ship navy. Now, the US Navy has 280. Today, we have half the fighter planes of a quarter century ago, and their average age is over a quarter century. In short, the Defense industry is taking more taxpayer money to the bank than ever while delivering far less than half the product.

Industry is not nearly so much to blame for this as are the politicians that write its orders and sign its checks. Rich corporations take money on the easiest terms, as naturally as do poor welfare recipients. Corporate welfare, crony capitalism, is as corrupting as any other kind of welfare. But it is more deadly to America, especially when the cronies on both sides of the table are dealing with military matters.

The mutual defense pact between big government and big business — crony capitalism — is by no means the Republican Establishment’s sole responsibility. In fact the Democratic Party in its entirety, openly and on principle, is all about what it calls “private-public partnership.” The party itself consists of interest groups that are funded by the government and which in turn fund the politicians who run the government. This is the “interest-group Liberalism” that has become the corrupt norm in American public life. Few challenge it.

The Republican Establishment is significant because it — people like McConnell, John Boehner, Karl Rove, etc. — is the front line of defense against those few who do challenge it, namely the conservative issue groups and the Tea Parties.

Their challenge is forcing such as McConnell, Boehner, and Rove to court their crony capitalists more brazenly than ever. The protestations of their own conservatism (“ain’t nobody here but us conservatives”) with which they try covering their courting are becoming funny. My favorite is a Wall Street Journal editorial (Oct. 10 2013) that chastises conservatives for distinguishing themselves from “the GOP establishment as if there still is such a thing.”

It calls to mind images of Mafia dons caught in the notorious Appalachin, NY conclave of 1957 swearing to Congressional investigators: “there is no such thing as the Mafia.” Sure.

The Deadwood of Crony Capitalism