‘A kick in the ballots’ is how pundits are describing the blow received by British Prime Minister David Cameron at the polls last week in his country’s mid-term local elections in the rural shires, traditional heartland of support for the Conservative Party he leads. 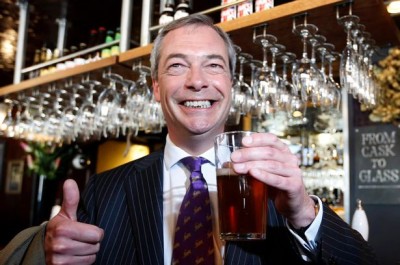 Gleefully administering the blow was Nigel Farage, the ever-exuberant leader of the United Kingdom Party Independence Party (UKIP for short). A Member of the European Parliament since 1999, Farage has recently signaled his intention to stand for a seat in the Westminster Parliament at the next general election in 2015, something that his party has so far failed to achieve.

While the Conservative Party lost 335 council seats in last week’s local elections, and the Liberal Democrats, junior partner in the current coalition government, lost a further 124 seats, Labour only gained 291 seats.  From previously having had a mere handful of council seats, UKIP gained a staggering 139 of them by securing no less than 23 per cent of the vote. This is only 2 per cent less than the Conservatives whose share of the vote was the lowest ever secured by that party in local elections.

Although in coalition with the Conservatives, the Liberal Democrats are far closer to Labour in terms of policies and outlook than they are to their coalition partners. Consequently, most gains made by UKIP were at the expense of the Conservatives, a fact of which their leadership is only too acutely aware. Whereas prior to last week’s elections, the Conservatives had been given over to dismissing UKIP supporters as “loonies, fruitcakes, and closet racists” (David Cameron), and “clowns” (Kenneth Clarke, former Chancellor in John Major’s previous Conservative administration), now they were desperate to let UKIP supporters know they had heard their cries and  were now anxious to respond to their concerns.

The Prime Minister was first to be made to eat humble pie in front of the cameras. When asked whether he still stood by his former disparaging assessment of UKIP, he replied: ‘It is no good insulting a political party that people have chosen to vote for. We need to show respect for people who have taken the choice to support this party and we are going to work really hard to win them back.’ Conservative Party Chairman Grant Shapps was similarly keen to show his party’s new-found willingness to heed the concerns of disaffected former Conservative voters who had deserted his party for UKIP. He told an interviewer: ‘We hear the message, we get it; we understand what people are saying…  We need to show that we are relentlessly on the side of hard-working people in this country, who want to get on in life, do the right thing, and Conservatives back them.’ Likewise, Conservative Party Vice-chairman Michael Fabricant joined in the chorus by tweeting that ‘life cannot go on as normal’ for the main three parties ‘unless they have no ambition for 2015’.

Already senior figures within the Conservative Party are beginning to speculate in public about how best to win back the support of disaffected former voters who have gone over to UKIP. In January, David Cameron pledged that, if returned at the next election, his party would hold an in-out referendum on Europe after renegotiating more favorable terms. That pledge apparently had left these former supporters unmoved.

Some senior Conservatives, therefore, are now calling for a pre-election ‘mandate’ referendum on whether and what powers their party should seek to repatriate from Europe, if elected to office in 2015, and then hold an in-out referendum about. The tactical thinking behind the ploy is that, since among the three main parties, only the Conservatives currently offer such a referendum or seem likely to, only by voting for them will UKIP supporters be able to secure such a referendum. Their continuing to vote for UKIP would merely hand over electoral victory to the Labour Party, given Britain’s first-past-the-post electoral system.

UKIP is not overly impressed by the ploy. For one thing, its supporters want Britain altogether out of the EU, not just the repatriation of a few powers that have been ceded to it. For another, they simply do not trust David Cameron, regarding him as having reneged on a previous commitment that, if elected to office, his party would hold a referendum on the Lisbon Treaty.

It remains to be seen what sort of accommodation, if any, the Conservatives succeed in arriving at with UKIP. One thing is certain however. Given last week’s results, electoral politics in the UK have been shaken up for good by the arrival of UKIP as a genuine fourth force in British politics.

Their arrival is long over-due. The British electorate has been lamentably treated by both major political parties in connection with Europe. Conservative Prime Minister Edward Heath took his country into the European Economic Community (as the forerunner of the EU was then known) without having secured any electoral mandate from the British public for doing so, save to negotiate about entry. He then knowingly lied to the British publicly by telling them that, in entering the ECC, no essential national sovereignty would be lost. Harold Wilson then deliberately misled the British public, when, having displaced Heath as Prime Minister in a general election on a mandate to renegotiate membership terms on which a referendum would be held, the Labour Prime Minister then told the British public at the time of that referendum that the EEC was only an economic union, without any political import.  Subsequent Labour Prime Ministers Tony Blair and Gordon Brown both denied the British electorate a referendum on the Lisbon Treaty, despite their party having previously pledged to hold one on the ill-fated European Constitution of which the Lisbon Treaty was merely a re-working to avoid mandatory national referenda elsewhere in Europe where it is known it would be rejected. And then there is David Cameron’s breach of promise to hold a referendum over the Lisbon Treaty despite an earlier pledge, on the grounds it was now too late.

Situated on the very western rim of the European Union, Britain has for long been by far the most sceptical and half-hearted member state in terms of national support for that supra-national state in the making. Since the global economic downturn of 2008 and the Euro-crisis in particular, Euro-scepticism has crossed the English Channel and is now rife throughout the continent. As was reported in the Guardian newspaper at the end of last month:

Data from Eurobarometer shows trust in the European project has fallen even faster than growth rates, Since the beginning of the crisis, trust in the EU has fallen from +10 to -22 in France, from +20 to -29 in Germany, from + 30 to -2 in Italy, from + 42 to -52 points in Spain, from +50 to + 6 points in Poland, and from -13 to -49 points in the UK… Back in 2007, people thought that the UK, which secured -13 points in trust, was the Eurosceptic outlier. Now, remarkably, the four largest eurozone countries have even lower levels of trust in the EU institutions than Britain back in 2007.

What, then, is happening in Britain with the rise of UKIP is of far wider and more general political import than being a customary mid-term protest vote against the ruling party or parties, as in this case. Indeed, arguably what we are seeing is a phenomenon of mass disaffection with the political classes and established political structures in all western liberal democracies, America not excluded. As the British journalist Melanie Phillips recently observed in briefly commenting on the UK local election result:

The travails of the British Conservative Party are mirrored by the existential agony of the US Republicans. Some of the specific issues in contention are necessarily very different… but… in essence the problem is the same. Faced with societies which are fragmenting through the march of secularism and the erosion of traditional moral values, the enormous changes in the composition of the nation, and the steady replacement of communal bonds by interest groups competing for power and privileges, conservatives simply don’t know how to connect with a public they scarcely recognise. Well, actually… it’s really [not] all that difficult, because, despite these enormous social changes… most of us share a desire to better ourselves, to live in peace and security, to raise children safely and healthily, and so on. These are all socially conservative aspirations, because most people are socially conservative. Those aspirations are best served by values and institutions that do not try to change society but reinforce the ties that bind us together in a shared community. And it is those aspirations that too many conservatives in both the UK and US have forgotten it is their core mission to protect and promote… [I]f conservatives can finally realise that, far from being “nasty” or “divisive” or “Neanderthal”, their defence of what is priceless to our civilisation is the only project that matters, they will find that once again they [will] connect with a public that has become so dangerously disaffected and disillusioned.

Sometimes it takes a hefty kick in the ballots to bring a political party to its senses, especially a conservative one. Hats off to Nigel then, or, as he put it in his inimitable style: Send in the clowns!

I Have Seen London’s Future and It Is Caracas

Brexit's hope for the UK was in becoming a country of greater liberty and responsibility, there is scant evidence of that happening.