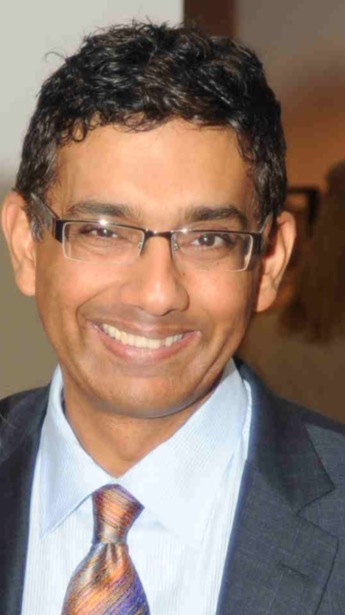 There’s something deliciously impertinent about Dinesh D’Souza. Watch D’Souza here, facing off against Bill Ayers in front of a full auditorium. He opens with a joke about metal detectors, a sly reference to the bombs Ayres set off in the 1960s. A few minutes later, he skewers Ayres for his cushy trust fund background. Attaboy Dinesh, you’ll be saying, in admiration of his guts and his articulate defense of America.

Debating the A-list celebrities of the Left is one thing; offering a conservative message to mainstream America in a movie is another. The filmmaker had better 1) understand America; and 2) be not just pro-American but an artist—or else he turns into a Rightwing version of other entertaining but tendentious filmmakers like, say, Michael Moore.

D’Souza’s new documentary America: Imagine a World Without Her has apparently out-earned Moore’s Capitalism at the box office. As to political influence, the two men probably score a tie: The release of D’Souza’s first film 2016: Obama’s America was supposed to have prevented the reelection of Barack Obama in 2012. It did not, any more than Moore’s Fahrenheit 9/11 prevented George W. Bush from winning another term in 2004. (Raking in the dough must be a nice consolation for failing to convince anyone not already on your side.)

America is a dizzying mix of History Channel-style reenactments of scenes from the nation’s past, super-charged rock music, colorful graphics on the advantages of the free market, interviews, gorgeous nature shots, clips from famous movies and cable television dramas, and funny sequences starring D’Souza, who also narrates. Funniest of all—and it has to have been a special effect—is the filmmaker buying a hot dog from a vendor in Manhattan’s Times Square and, amid the throngs of excited tourists, munching on it as he gazes up at one of those huge screens, which just happens to have Michael Moore on CSPAN talking about poverty in America.

Another highlight is about hamburgers—or, more specifically, what it’s like to run a small business called “Delish Dinesh.” We see multiple D’Souza’s, a white-capped D’Souza flipping burgers out front, and a proprietor D’Souza in the back room, diligent in the pursuit of his modest but honorable profits. One customer’s meal is expressed in statistics that convey how much time and money she saved by eating at “Delish Dinesh” instead of cooking the meal for herself in her kitchen.

This charming and instructive demonstration that capitalism is “a win-win” has the feel of a good television show for the mathematically challenged. It’s good, in other words, but it lacks movie-ness.

Watch out, though, when D’Souza decides to go for movie-ness. His purpose with this film is, at least in the first half, to refute Howard Zinn—he of the bestselling anti-American history textbook. The second half of America has reenactments with actors playing an undergraduate-aged Hillary Clinton and her associates: Barack Obama, Saul Alinsky, and Lucifer.

D’Souza is an immigrant from India, and he speaks movingly about what the United States has meant to him. Its larger meaning, however, is crassly summed up in his favorite term, “wealth-creation.” So busy is he disproving the Left’s accusations of vampiric U.S. colonialism and racism that he becomes as materialistic as Zinn or any other Marxist. Extolling free economies isn’t wrong, but it isn’t complete, either, without mentioning what they rest on. American-style capitalism rests on such fragile things as a basic culture of trust and virtue. The rule of law is a hard-won accomplishment—try capitalism without it and you get crony capitalism, for which I’m sure the filmmaker holds no brief.

I know. The rule of law is inchoate. It would be hard to put it in a movie or, for that matter, to thrill audiences with the civil-society activity that the rule of law makes possible. Maybe D’Souza was unaware of what is out there today—livestock being exhibited by 14-year-olds at state fairs, inner city kids learning chess at the local C.Y.O., runners organizing charity 5k races—but I doubt it. I imagine him thinking ah, that’s a bunch of Audubon Society tedium.

Let’s say his cinematic judgment on that is sound; even so, it leaves him mostly depicting two varieties of Americans: the scientific and business geniuses (Thomas Edison, Steve Jobs, Bill Gates), and the rest of us, who are shown hankering after their wares. There’s celebratory footage of Apple customers camping out overnight in front of the store waiting to buy the latest device.

I say mostly, for America also has political geniuses such as Washington, Lincoln, Frederick Douglass, and, in a cheesy but somehow pleasing touch, a Gallic-looking actor playing Alexis de Tocqueville. Tocqueville is shown figuring out that Americans value religion, that they voluntarily help the needy, that slavery corrupts slave and master alike, and that slave-owning Kentucky is economically sluggish compared with its neighboring state, vibrant and industrious Ohio, land of free labor.

Not just heroes but heroines of entrepreneurialism appear—for example Madam C. J. Walker, who, in the face of Jim Crow, became the nation’s first black millionairess. It is a brazen choice on D’Souza’s part. He of course leaves out the fact that the beauty products that earned Walker a fortune—skin-lighteners and hair-straighteners—were anathema to moral spokesmen like Booker T. Washington. America is tinselly even when it is emotionally stirring.

Tinselly cannot not do justice to the movie’s wind-up. D’Souza ends by entreating us not to let the likes of Zinn, Chomsky, Alinsky, Ward Churchill, and Hillary win the argument about America. To prove this is a good country, each of us must go out there and take risks in her defense. Imagine, if you can, the chutzpah—and it might even outstrip Michael Moore’s—of adding oneself to the tableaus of the self-sacrificing patriots. General Washington leading his troops in battle against the redcoats . . . Colonel John Fer withstanding torture in Vietnam  . . . culminating in Dinesh D’Souza, wearing a crisp buttoned-down shirt, handcuffs, and a hangdog expression, as he reenacts his arrest early this year in Manhattan for making illegal campaign donations.

Be warned. After downing this very full plate, with its tasty bits mixed with corn pone and occasional tripe, you may get indigestion.

The Flawed Foundation of the European Union

State of Florida vs. George Zimmerman (2): The Fabrication of Probable Cause