Important as it is to fix responsibility for failure to protect America’s diplomatic contingent in Benghazi Libya, which led to the death of four Americans on September 11 2012, the effort to do so detracts from a question that goes to the heart of U.S. foreign policy: Why is it that so many U.S. embassies and outposts need protection by U.S. military forces, and even in civilized countries have had to wrap themselves in ever-heavier blankets of security? What has U.S. foreign policy done to raise the level of hate which millions of foreigners bear for us, while at the same time decreasing fear of American retribution? Addressing such questions requires re-assessing the fundamentals of U.S. foreign policy.

Real diplomatic relations do not depend on military force. The safety, respect, and immunity of envoys have always been the sine qua non of diplomacy. The 1648 treaties of Westphalia formalized ancient custom: the host government guarantees respect of embassies as if they were the guest’s sovereign territory. So fundamental is this privilege of extra-territoriality that the invasion of embassies has always been a casus belli, a just cause for war. The guest diplomats do business with the host government, while abstaining from interference in the host country’s internal affairs.

Let us be clear: To the extent that America’s official representatives cannot go about in a foreign country unescorted, it is because enough people in that country find their activities to be so unacceptable that the host government cannot or will not guarantee the envoys’ safety and respect. In short, America cannot have properly diplomatic relations with countries with which it is not entirely at peace. 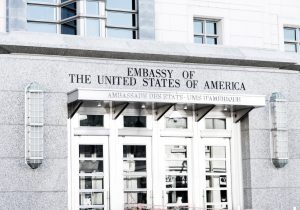 Most Americans find it difficult to imagine how so many of the world’s peoples see us as enemies, since we have devoted billions of dollars and enormous effort to uplifting mankind. Yet already by the 1950s we had become accustomed to images of violent demonstrations in front of U.S. embassies in countries receiving U.S. aid. The reasons go beyond ordinary human ingratitude and tendency to resent interference in one’s affairs. In fact, so many foreign factions hate America because they believe that America hates them. Why? Because, necessarily, every program of reform or even of simple aid in which America takes part disadvantages or merely fails to advantage some more than others. Reform is a fine thing, unless you are the one upon whom reform is being imposed.

But the U.S. government chose to consider attacks on our envoys as an acceptable price to be paid for involving ourselves in the betterment of mankind. Alas, the price has risen. So strong was our ruling class’ desire for good relations with people whose friendship it believed it was cultivating that the PLO’s 1972 murder of U.S. ambassador Cleo Noel did not stop U.S. courtship and financing of that organization.

Iran is an extreme example of something that has happened many times in many places over the past two generations. Beginning in the 1950s, the U.S. government partnered with Iran’s Shah to modernize that country. “White revolution” is what the U.S. and the Iranian government called their vast joint program of secularization. Many Iranians loved it. Many others hated it with all their souls, and rallied behind the Ayatollah Khomeini to overthrow the Shah. Believing that America had been at war with them, they proceeded to make war on America.

Iran’s 1979 invasion our embassy’s sovereign U.S. soil and imprisonment of diplomats was a textbook act of war. The most obvious reason why so many foreigners hold America in contempt, why so many believe that America is ripe for picking, is that we responded to this and similar acts of war by loud words and feckless deeds. No surprise then that so many have picked away at us, and no reason to doubt that more will pick ever more violently. Why should they not? American statesmen have forgotten how to conduct themselves in peace, and how to defend America by war.

The level of respect and disrespect for any nation’s diplomatic representatives is an accurate barometer of how foreigners regard that nation itself. In order for us Americans ever again to enjoy the peace that only respect can bring, American statesmen will have to re-learn to focus our diplomacy on properly diplomatic business, as well as how to win wars.

Iraq is a cautionary example. The compound (4 million square feet, 15,000 employees) that goes by the name of U.S. embassy there is far less an embassy than it is a viceroyal compound, from which almost every part of the U.S. government intends to superintend every part of an Iraqi society that is at war with itself. Since, precisely for that reason, these Americans are parties to that war, they require constant protection by U.S. armed forces. This is not diplomacy. It is forceful interference in another country’s internal affairs.

Whether such forceful interference is good or not is a question unto itself. But there can be no doubt that confusing diplomacy with interference is the very same thing as confusing peace and war. This confusion is at the heart of the problems of American foreign policy. Nothing is more important than to re-establish clear lines between peace and war: to give unto others the peace and respect we demand for ourselves, and to answer wars with double doses thereof.

Failure to make proper distinctions is at the heart of America’s foreign policy problems.

Zwolinski on A Guaranteed Minimum Income

Universal Visions in the Old Testament

Empires are part of the Old Testament plan for reconstituting humanity and repealing the judgment at Babel.

Kissinger Doesn’t Have One, Either