So President Barack Obama and the Democratic Congressional leadership are going to end inequality? A half century after President Lyndon Johnson’s attempt to eliminate poverty, progressives aim higher. While cynics may think the real goal is changing the subject from Obamacare, most progressives actually have kept the faith. Eliminating inequality guarantees the moral high ground, especially with a supportive media who also desperately want to believe and who will faithfully transmit whatever theme their political allies send their way.

The media are so culturally dominant that progressives trap themselves into the delusion that everyone down deep agrees with them on equality. The columnist and former Bill Clinton aide William Galston is a good example, claiming: “Most liberals agree with most conservatives that the objective is equal opportunity.” He even quotes Rep. Paul Ryan saying “the condition of your birth does not determine the outcome of your life” as support for the progressive equality agenda. But that agenda actually requires more federal government redistributive, anti-poverty, educational, jobs and family programs that are not so broadly supported.

Washington Post columnist Harold Meyerson will laud President Obama’s commitment to equality and additional redistribution but objects that even the president supports a Pacific trade pact that could reduce the number of American manufacturing jobs resulting in increased U.S. inequality. “By now even the most ossified right-wing economists concede that globalization has played a major role in the loss of American manufacturing jobs” with its “stagnation of U.S. wages and income.” But do they agree trade reduces overall employment or equality?

The pope is even recruited into the righteous cause of eliminating inequality. But are they all really talking about the same thing? Meyerson opposes trade because he believes poor foreigners underbid American workers to win manufacturing jobs from them, with U.S. blue collar workers presumed to lose jobs and income relative to richer Americans thus increasing U.S. inequality. Even if this were true, poor foreigners earning more income actually reduces world inequality. Even Galston believes free trade helps the poor. Meyerson’s is not support for the moral ideal of universal equality as promoted by Pope Francis but quite the reverse by supporting more income for already relatively advantaged Americans at the expense of the foreign poor. 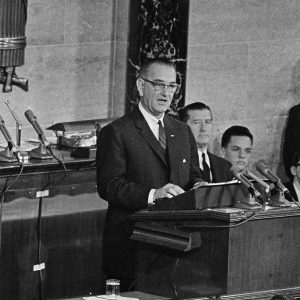 Johnson’s War on Poverty was one program praised by all progressives. But there are reservations. Galston rejects Ronald Reagan’s quip that the U.S. fought a war on poverty and poverty won; but he concedes that the U.S. only “fought poverty to a draw.” Roughly 15 percent of Americans were below the official poverty level by the end of Jimmy Carter’s recession in 1983 and 15 percent still are after today’s Great Recession, a seeming economic stalemate. The Post’s Dana Milbank relying on White House data disagrees, claiming that “if you include all the financial assistance from anti-poverty programs the poverty rate drops to below 8 percent today.”

But the issue is not whether the government spent the money but did it reduce poverty without offsetting negative effects? Republican Sen. Marco Rubio notes that after five decades and trillions of dollars spent, 4 million Americans remain out of work 6 months or more, 49 million people are below the official poverty level, 100 million are receiving federal food aid, labor force participation is at a 30 year low, and the bottom 20 percent of income earners are “stuck there for life.” A study by Bruce Meyer and James Sullivan, however, suggests that based on actual consumption, real poverty is as low as 5 percent: half of those officially poor actually have computers, 36 percent have dish washers and 43 percent have central air conditioning. A recent Census Bureau report found that while as many as 31.6 percent fell below the official poverty line over a recent three year period, only 3.5 percent were stuck there the whole three years.

Official statistics have never counted non-monetary assistance, nor have they looked over periods of time, or at consumption so they have always exaggerated the extent of poverty. Even recognizing some gains from government programs, and the economy generally, Robert Samuelson concedes this was not in fact the aim of the War on Poverty, which Johnson said was for “most poor people [to] become more productive, independent and middle class.” This did not happen. The most popular education program Head Start shows gains at the onset but they are dissipated as soon as the third grade with no positive educational or earnings improvement thereafter. While there has been a net transfer to seniors, it has come from the young. Welfare for poor women has allowed them to gain independence from earned wages from potential husbands but has transferred dependency to government. As a consequence, the share of single-parent families in the U.S. has tripled since the war on poverty, up to 34 percent today. Children of such marriages are more likely to drop out of school, get pregnant before age 20 and be unemployed, self-perpetuating poverty rather that eliminating it. In the 1960s only 6 percent of men between ages 25-54 were without jobs compared with 17 percent of men today, the supposed beneficiaries of jobs programs.

It is clear that nothing in the president’s State of the Union or the Senate Democrats’ proposals would do anything that would eliminate poverty more than the past fifty years of poverty fighting, much less reduce inequality. The only difference today is there is no more money or the willingness to spend what there is, as the polls clearly demonstrate. Even many proponents know this; deep in their heart of hearts most do not believe that redistribution would do much to solve the paradox that the more funds are redistributed downward, the more work incentives and independence are reduced. The great French analyst Alexis de Tocqueville warned that this was the threat to American democracy. Indeed, Aristotle said it more generally even earlier.

As the Tax Foundation’s Scott Hodge shows, the top fifth in the U.S. already redistribute 21 percent of their income downward and would have to be taxed at 74 percent to reach income equality. While it is anathema to progressives, the data show that, in general, countries with developed economies and freer markets are more equal (as measured by the Gini index) than less capitalist economies. Indeed, it is reasonable to conclude that the only way world inequality has been reduced has been through market capitalism supported by a tradition of family, work, property and individual moral responsibility. Beyond providing welfare to the relatively few truly needy (presumably mostly lacking computers, central air or dishwashers) and giving temporary assistance to those facing real emergencies—both mostly done by local people who can assess the need, as Tocqueville illustrated—national government policies probably have a net negative effect on Johnson’s goals of productivity, independence, and rising to the middle class.

Contrary to the progressives, America does not need agreement on some policy panacea to end poverty and inequality enforced by Washington experts. What it needs is recognition that the national welfare state is failing and that Americans need to begin the long journey back to the federalism and freedom that made the U.S. the envy of the world.

The politically correct today will be intolerable tomorrow—at its core, progress demands it.

The Physics of Party Government