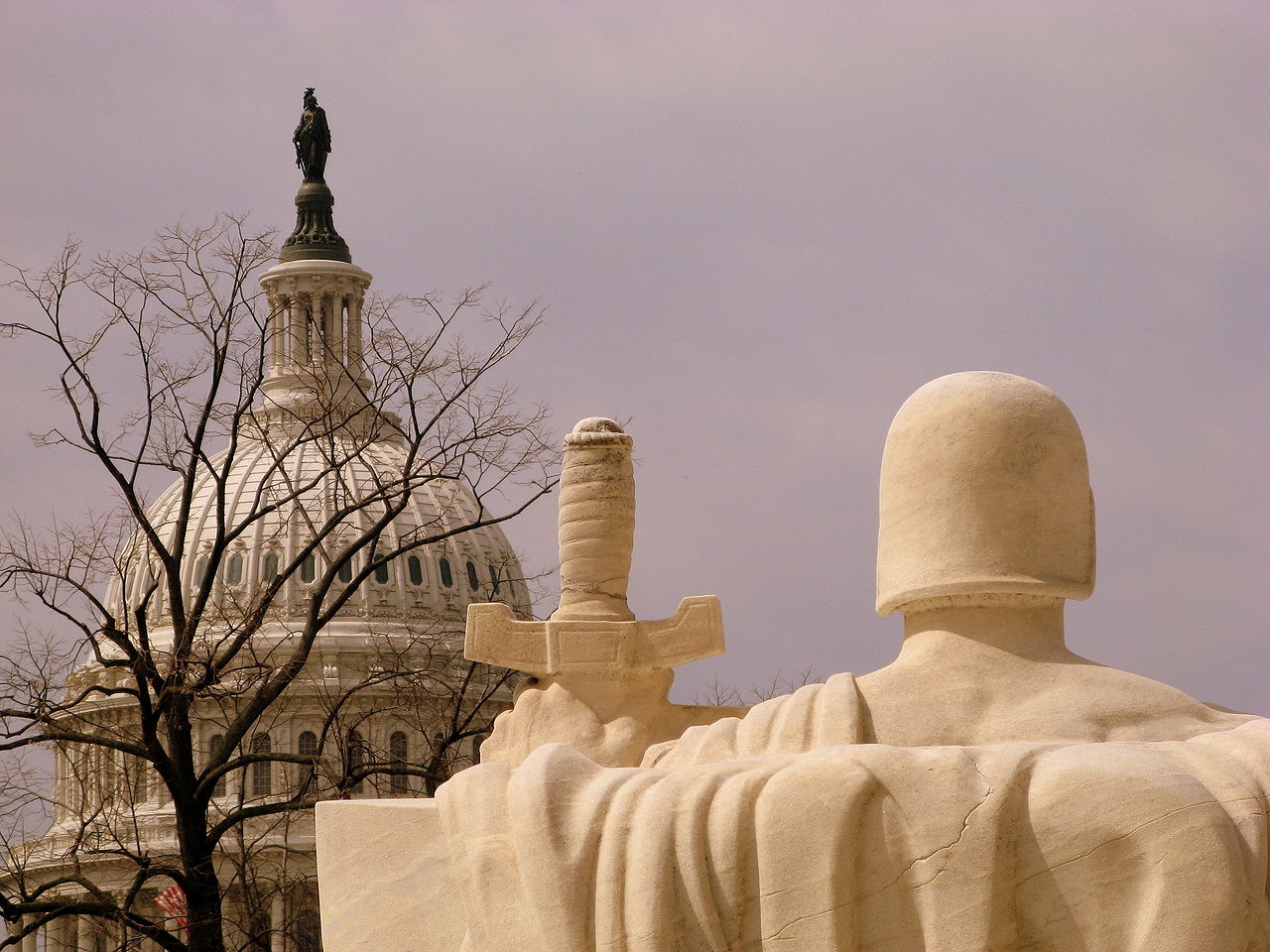 The Massachusetts Constitution’s Declaration of Rights says, in its conclusion, that:

That constitution, providing for a lower house, a Senate, and a governor armed with a (qualified) veto was, in many ways, the model for the federal Constitution drafted a few years later.

This passage has been on my mind lately, particularly with reference to our discussion of immigration. The President is apparently considering acting on his own because Congress has not sent him a bill to tackle the problem. But is that the President’s job? As Bloomberg’s Megan McArdle notes, “Whatever your opinion on immigration policy, I hope it doesn’t involve supporting giving the president extremely broad powers to simply rewrite any law that he thinks ought to be different.”

Writing the law is not the President’s job. It’s the job of the people we elect to serve as Representatives and Senators. The President is involved in that process through his veto, which may be overridden by those same Representatives and Senators. The veto is an important power.  “Without this weapon of defense,” John Adams feared, “he will be run down like a hare before hunters.”[1]

In governments where the executive lacked the power to veto laws, the legislature could force him to do all kinds of things that were irreconcilable with the nature and purpose of the executive chair in a republic. The President was not meant to be the servant of the legislature; the purpose of the veto was to ensure his independence. As James Madison noted in Federalist 47, the legislative, executive, and judicial powers are not entirely separated in our system, in order to give each branch a means of self-defense. As an example, he pointed to Adams’ work in Massachusetts (he was the principal author of the above-quoted constitution).

With respect to the laws, the President’s job, according to the U. S. Constitution is, to “take Care that the Laws be faithfully executed.” He is the employee of we the people. Through the legislative process we empower the President to do x, y, and z, as legislators specify in the statutes they pass. (Circumscribed too is the power, under the Constitution, of the legislature to make laws about certain things, but not about others.)

Granted, the office entails other duties. In foreign affairs, there is a good argument that considerable prerogative power remains in the executive office, as Hamilton noted. Indeed, one could argue that the President has a presumptive power to secure our borders from invasion. What authorization he needs from Congress to build a fence, while large numbers of foreigners are entering the United States without legal authorization, is an interesting question.

If all moral ideas are human inventions, then all governments are governments of men because, whatever laws they may or may not have, the standards they have are, well, stuff human beings have made up. Hence it is no coincidence that the preamble to the Massachusetts Constitution expresses gratitude to God:

We, therefore, the people of Massachusetts, acknowledging, with grateful hearts, the goodness of the great Legislator of the universe, in affording us, in the course of His providence, an opportunity, deliberately and peaceably, without fraud, violence or surprise, of entering into an original, explicit, and solemn compact with each other; and of forming a new constitution of civil government, for ourselves and posterity; and devoutly imploring His direction in so interesting a design, do agree upon, ordain and establish the following Declaration of Rights, and Frame of Government, as the Constitution of the Commonwealth of Massachusetts.

The good people of Massachusetts believed that God was the author of creation and, hence, of the rights of men. In that, the Massachusetts Constitution was merely following the Declaration of Independence, that “all men are created equal” and are “endowed by their Creator with certain inalienable rights,” and “to secure these rights, Governments are instituted among Men, deriving their just powers from the consent of the governed.”

The Massachusetts Constitution, the first constitution written by a specially called convention and ratified by the people, put the principles of the Declaration into practice. The 1776 document can be heard in the Declaration of Rights with which we began, whose opening states:

All men are born free and equal, and have certain natural, essential, and unalienable rights; among which may be reckoned the right of enjoying and defending their lives and liberties; that of acquiring, possessing, and protecting property; in fine, that of seeking and obtaining their safety and happiness.

And that returns us to the separation of powers, so prominently highlighted in the Commonwealth’s fundamental document and so clearly connected therein to the rule of law. Adams of Massachusetts, and an entire Founding generation, concluded that it was an essential means of securing the rights of men. Consider that, if the legislature were also implementer of the laws it passed, it would have no incentive to write clear laws, or to place limitations that mitigated potential abuses of power. Only if someone else was going to enforce the law would the legislators—provided the law applied equally to them—have an incentive to be on their guard.

And the same logic applies to the other branches. The general principle is that it is a bad idea to make a politician a judge in his own case. Prerogative power, as Professor Hamburger eloquently notes, does precisely that. But down that road lies a return to the notion that we are the servants of government, not the other way around. The idea, current in some circles, that “government is the only thing that we all belong to” points back in that direction. The purpose of separation of powers is to ensure that the government works for us, and not the other way around. Beyond the governmental realm we are free, in civil society, to act freely, without the direction of law.

It is, however, an open question whether a government as big as as ours can at this point stay a limited constitutional government. Must contemporary “big government,” to use our shorthand term for it, be arbitrary government? Madison worried that it would be, as he noted in a passage I quoted in this space recently.  It bears re-quoting in the current context:

In proportion as the objects of legislative care might be multiplied, would the time allowed for each be diminished, and the difficulty of providing uniform and particular regulations for all be increased. From these sources would necessarily ensue a greater latitude to the agency of that department which is always in existence, and which could best mould regulations of a general nature so as to suit them to the diversity of particular situations. And it is in this latitude, as a supplement to the deficiency of the laws, that the degree of Executive prerogative materially consists.

Madison may not have been entirely correct. It might be possible, in some ways, to expand the job of government in a manner consistent with the separation of powers. But that line probably does not go all that far. There is one particular concern to keep in mind. Human beings are creatures of habit, as are our politicians. An executive that grows accustomed to having a great deal of discretion in writing and implementing the laws that Congress passes will, almost certainly, come to think his job is to exercise discretion in general, even in cases where the law is quite clear or where there is no law giving him any authority to act.

Given that the kind of person who is likely to become President is not likely to be the kind of person who likes to think of himself as the employee of anyone, much less of the common people of the United States, the growth of administrative discretion is a grave danger to the separation of power and hence to the cause of republican self-government.

Barnett on the Invasion of Iraq

A Tale of Two Majorities

Liberalism, Populism, and the Politicization of Everything