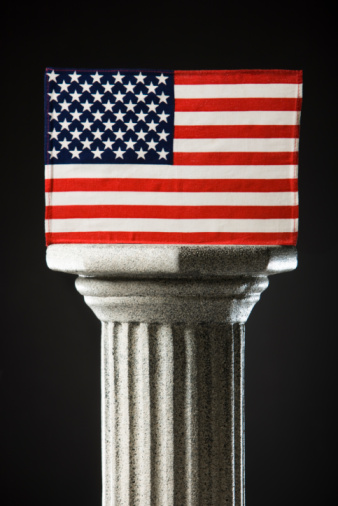 Vladimir Putin announced his Anschluss of the Crimea— a textbook act of imperial conquest—as a rebuke to American imperialism. This mockery is a measure of our present predicament among nations, and of the prospect that it will only get worse. What reality elicits such contempt? What would it take to remedy it?

Just after the Soviet Union’s breakup in 1992, the first Bush administration had prevailed on Ukraine to deliver to Russia all of the Soviet nuclear weapons and missiles on its soil in exchange for a solemn U.S. guarantee of its independence and territorial integrity (delivered by the Clinton administration in 1994). This, far from being an anti-Russian act of American imperialism, was bipartisan ruling-class naiveté combined with insouciance about ends and means. The U.S. government had no way of enforcing that guarantee then.

It has less now. Why? Because Gresham’s law— bad currency drives out good—applies to international affairs as it does to the rest of human experience.

Having wasted some 10,000 American lives, multiple trillions of dollars, and the American people’s trust over the course of a decade-plus by foolishly trying to answer Islamic terrorism with whack-a-mole tactics, nation-building strategy, and Homeland Security, the U.S. government now finds itself militarily, morally, and politically disabled in the face of geopolitical challenges in Europe and the Pacific Rim.

We are just beginning to understand the consequences of our bipartisan ruling class’s misunderstanding of terrorism as the work of rogues rather than as the bigger, deeper problem it is: Islamism in reaction to the dysfunction of the Muslim world’s regimes and our own civilization’s self-abasement. The attempt to eliminate the rogues by sorting them out of Iraqi, Afghani, Yemeni, societies while also reforming these societies only spread hate for America. Our failure spread contempt. Continued American solicitude toward many of these regimes and groups as anti-American incitement and violence persisted only increased the Muslim world’s contempt for Americans.

The result has been to multiply the number of Muslims who think it good, even obligatory, to hurt us. The rest of mankind passed on us the judgment reserved for the mighty who make a mess of themselves.

Consider that the National Security Agency is recording ordinary persons’ communications even though the U.S. government was unable to identify and prevent those who carried out our age’s major outrages. The U.S. government did not identify the 9/11 crew despite (or maybe because of) the fact that it operated under its very nose. Nor the Boston Marathon bombers. The shoe bomber, the underwear bomber, the Times Square bomber, simply miscarried from incompetence. If an outrage occurred tomorrow, few would be surprised that the U.S. government had failed to warn of it, much less prevent it. Indeed, there is a unbroken correlation between U.S. warnings and non-occurrence. Knowing all of this, we can infer that Homeland Security’s vast powers are just as likely to be used for domestic partisan purposes as are any of the government’s other powers. Americans have rightly lost trust in their government.

The Obama administration’s announcement that the U.S. Army is to be shrunk to 1940 size, that the number of Navy ships and of Air Force planes will continue to shrink as existing equipment ages and is not replaced, rounds out the picture: The United States of America has used up men; materiel; money; credit, of the moral even more than of the financial kind; and spirit above all.

Too obviously—in Putin’s eyes, and everyone else’s—such a country has neither the means, the political capacity, nor the strategic sense to confront major challenges to its interests. China’s multi-dimensional push for hegemony in the Pacific Rim, the beginning of Japan’s reaction thereto which may include nuclear weapons, as well as South Korea’s interest in acquiring such weapons, are logical consequences of the region’s realization that the Pacific’s Pax Americana is a thing of the past. Similarly, the war between Sunni and Shia Muslims—today’s prime mover of events from North Africa to Pakistan—has pushed aside America’s and Europe’s interests in the region quite simply because the U.S. government has run out of will, capacity, and above all ideas about how to assert those interests.

The past generation’s ill-conceived and botched commitments only worsened the disparity between the U.S. government’s ends and means. That deficiency of statesmanship, however, is deep-rooted in a combination of moral hubris and anti-militarism. The Bush I and Clinton officials who took weapons from Ukraine in the 1990s while guaranteeing its integrity are no different from the Harding administration officials who, in 1921, guaranteed the integrity of China while refusing to fortify the U.S. naval bases that would have allowed Washington to fulfill that guarantee, or from the Obama officials today who place sanctions on a dozen Russians and expect Putin not to scoff.

This will continue so long as U.S. officials imagine that the worthiness of their desires elevates them above having to look to America’s vital business, and even absolves them from the need to understand what it takes to move foreign powers. It will continue until they build missile defenses that can protect America and cover our military ventures, as well as a navy potent enough to ensure that no continental powers extend their sway over the major islands of the Atlantic or the Pacific, until the prospect of American displeasure causes fear rather than mirth.

America needs a new generation of statesmen for whom matching ends and means is second nature, who know the difference between their private predilections and America’s vital interests, who regard minding those interests not as a demotion from the rank of steward of the world but rather as a calling that absorbs the highest human talents—statesmen who inspire fear rather than scorn in such as Putin because they guard America’s peace by winning America’s wars.

Lawrence Walsh and the Abuse of Power