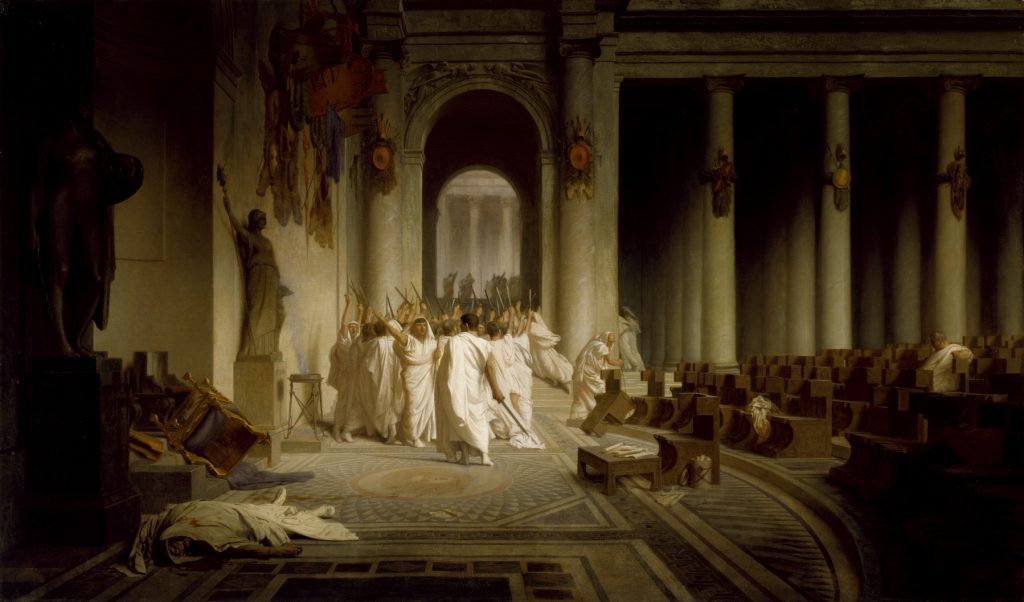 In a curious way, Julius Caesar isn’t the most important figure in The Death of Caesar: The Story of History’s Most Famous Assassination. The moral of Barry Strauss’s story, the point of it all, belongs instead to a thin, sickly young man in Caesar’s entourage—a grandnephew named Octavian—who would wend his way through the political crisis of Julius Caesar’s murder in 44 B.C. to become Caesar Augustus, ruler of the known world. The irony is almost unbearable: In the name of ridding the republic of a dictator, the incompetent assassins managed only to give Rome an emperor. “The Ides of March changed the world,” as Strauss notes, “but not as the men who held the daggers that day planned.”

Or perhaps, in a different way, the most important figure in the book comes 40 years before Caesar’s death, with the military victory of Sulla over his political rivals as he marched his legions up the Italian peninsula—and subsequently issued his murderous proscriptions, resulting in 9,000 Roman deaths. In the name of preserving the letter of the ancient arrangements of Rome, in place since the expulsion of the last king in 509 B.C., Sulla broke the spirit of every part of republican government, from expanding the sacred Pomerium boundary of Rome to claiming a dictatorship without a time limit.

Again, the irony is hard to take: Sulla had to smash the republic in order to set the republic again on a firm foundation. And what the young politicians of the time—from Pompey to Caesar—learned from his example was not the firmness of the republic but its fragility. The eventual enthronement of someone like Augustus, 20 years after Caesar’s death, was made inevitable by Sulla, 40 years before Caesar’s death, for the republic was incapable of governing the vast territories of the empire it had become in everything but name.

Of course, between Sulla and Augustus comes the greatest man ever to live. Or maybe the worst. Julius Caesar: Rome’s fullest success and most complete failure. Caesar was a mercurial figure known for his steadiness, a vain and self-obsessed politician famed for his military skill—a conspiratorial snake, feared for his conniving, who wrote the cleanest prose in the history of Latin. For we who come after, Roman history seems the strangest mix of absolute historical determinism and completely unpredictable happenstance. We keep studying this small stretch of time at end of the republic in part because, among all the consequential moments in the history of the world, the historical lessons here are the sharpest.

Thus, for example, in the long-running battle between the upper-class optimates and the lower-class populares, we can see the politician’s perpetual temptation to form an alliance between the upper one percent of society and the lowest 10 percent, against the center of the culture. Brutus’ attempts to claim the mantle of ancient senatorial privilege once worn by Cato the Elder show the degeneration of conservative seriousness into conservative faction. Caesar’s decision to bring his troops across the Rubicon in 50 B.C. shows how dangerous it is when soldiers are more dedicated to their general than to their government—while in the reasons Caesar felt he had to bring his legion to Rome, we can also discover the risks of judicial prosecutions for political motives. More than anything else, perhaps, in the ease with which triumvirates formed and fell to civil war, we can learn how brittle constitutional piety is as a bulwark of republicanism. Each politician claimed to preserve the forms of the old republic even as he gutted the content of those forms.

At the same time, we keep recurring to the end of the Roman republic not just for the determinism of its pointed historical lessons. We also return because the actors of the time are so compellingly, impossibly, and unpredictably fascinating. Cicero and Pompey, Cassius and Brutus, Caesarion and Octavian, Mark Antony and Cleopatra: It’s hard to imagine a moment more populated with titanic figures whose smallest thoughts, actions, and passions would have consequences for hundreds of years.

And chief among them Julius Caesar, whom Strauss, a Cornell University classicist, renders with loving attention in this book, in a prose that is readable without ever violating the scholarly details he knows so well. The question he faces, of course, is why Caesar was killed. What did the conspirators hope to get from the assassination? Only once we know what they wanted can we understand why they failed.

For fail they certainly did. “What they needed to secure their status was a military coup,” writes Strauss. “Instead, they committed murder and made speeches. Revolution, as Mao said, is not a dinner party.” Where Shakespeare converted Cicero into a fop and a fool, and Brutus into “the noblest Roman of them all,” Strauss finds Brutus a difficult combination of the petty and the high-minded. “Brutus believed in ideals that were bigger than himself—in philosophy, in the Republic, and in his family,” says the author. But Brutus was perfectly willing at the same time to betray “an older man who trusted him, just as he had earlier betrayed first Pompey and then Cato.”

Caesar’s murder was no stab in the dark. In this hour-by-hour, sometimes minute-by-minute account of the murder, Strauss brings to the fore the role of Decimus, the soldier who joined and helped direct the conspiracy, even though he was Caesar’s friend. But then, as Seneca would later remark, by the end the conspiracy included more friends of Caesar than enemies, and one of the wonders of that fateful day is that the rickety assemblage of plotters—perhaps as many as 60—ever managed to pull off their plot.

They chose the Senate itself for the murder, partly because Caesar would be separated from his lictors and ex-gladiator guards. “The dictator would not have a throng of ‘friends’ to protect him there,” as Strauss notes. But even more, they chose the Senate in the belief that the public setting would make clear that they were acting “on behalf of the country.” Slaying the tyrant in a public place in the heart of Rome? “The very act could inform and change public opinion.”

And so, despite many warnings, Caesar entered the Senate that day, the Ides of March, in a thick toga “dyed a reddish purple and embroidered with gold,” sat himself on the gold tribunal chair, and began to receive the respects of various senators. An acquaintance named Tillius Cimber seized Caesar’s toga and pinned him to his chair as the attackers drew their daggers and began the surprisingly difficult task of stabbing him to death.

And then they paraded out of the Senate to announce to the city what they had done. In the event, the crowds didn’t much appreciate their claims of high motive, and the funeral turned into an orgy of Caesar-worship. The conspirators had hoped to stage a drama of saving the republic; they got instead a drama of traitors turning on their friend. Cassius and Brutus raced away to gather armies for the civil war that would end with their defeat at Philippi, while a new ruling triumvirate would form with the predictable Mark Antony and Lepidus, joined by the surprising teenager (and heir to Caesar’s vast wealth) Octavian.

Octavian, of course, is the figure who would emerge from the mess of it all to claim the empire and establish the imperial system that, in its hundreds of years of existence, may be the most successful government in history. Certainly the Roman Empire still looms in our imagination, still stands as a kind of baseline when we think about both abstract political theory and the actual practice of politics. And without Octavian—the future Caesar Augustus—we would not have had that Rome.

One Man, One Vote in Texas

The ancients show us that when mutual agreement on the meaning of concepts like liberty starts to break down, there will likely be conflict.