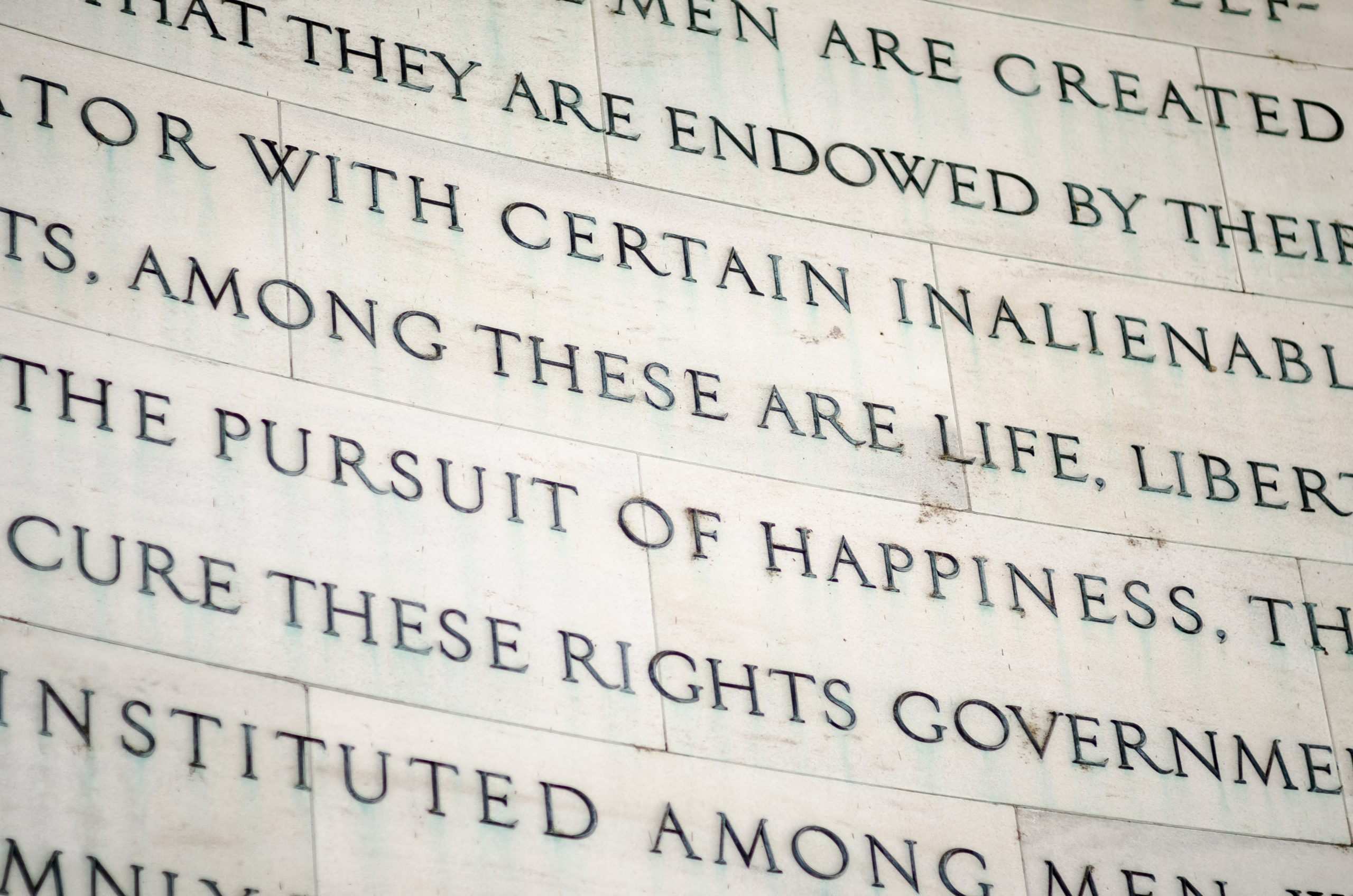 Inscription in the Jefferson Memorial of the Declaration of Independence

I posted earlier this week regarding whether Americans still believe the Declaration of Independence’s affirmation that they “consent” to laws and taxes through their legislative representatives. There may be good reasons Americans no longer believe they really consent to the laws their representatives enact, but it is a striking change from the beliefs articulated during the founding era.

In considering whether Americans still believe the Declaration of Independence, we next consider the most-well known section in the Declaration, “We hold these truths to be self-evident, that all men are created equal, that they are endowed by their Creator with certain unalienable rights, that among these are life, liberty and the pursuit of happiness, that to secure these rights, governments are instituted among men, deriving their just powers from the consent of the governed.”

There are, of course, entire books devoted to these few lines. A few observations, however. First, what is the link between there being a creator and persons being endowed with “unalienable” (or inalienable) rights?

“Alienate” is a term from property law. It means to transfer something. We alienate rights over property all the time by selling or given the property away. For example, the rights I have over the sofa I just bought are “alienable” rights. If I sell the sofa to someone else, then I have alienated my right to use and to dispose of that sofa; I have transferred those rights to the purchaser. But if someone breaks into my house and steals my sofa (it is a sweet sofa), the fact that my rights over the sofa are alienable does not in any way lessen the fact that the person who stole my sofa committed an injustice.

Inalienable rights are, for example, the dramatic backdrop in Jane Austen’s Pride and Prejudice and Sense and Sensibility. In both books the family’s property is entailed along the male line, meaning that the heir who receives the property in one generation only has the right to use the land during his lifetime. That heir cannot sell or otherwise transfer the land permanently (say, by giving it to his wife or daughters). Ownership is inalienable in the stories.

The Declaration’s affirmation that the rights mentioned are inalienable is in fact a restriction on what individuals can do with those rights. They cannot transfer them to anyone else.

Rousseau discusses the notion’s significance in explaining a passage from Grotius:

If a private citizen, says Grotius, can alienate his liberty and make himself another man’s slave, why should not a whole people do the same, and subject themselves to the will of a King? The argument contains a number of ambiguous words which stand in need of explanation. But let us confine our attention to alienate. To alienate means to give or to sell.

This then begs answer to the question, why would anyone in his or her right mind give away the right to life, liberty, or the pursuit of happiness?

As for alienating liberty, it’s easy to imagine in the past a community willingly ceding their liberty to strongmen in what is effectively a protection racket. Aristocrats initially were the warrior class. A community might give away a lot in terms of rights to be protected by a class of warriors from the depredations of roving bandits. Or even in the Bible, because of the pressure of famine, the Egyptians effectively sold their liberty to Pharaoh. They alienated their liberty to preserve their lives.

The practicality of affirming that rights are inalienable is when one observes despotism one does not need to inquiry into the history of consent and agreement to know that the despotism is wrong. If rights are in fact alienable, then it’s entirely possible that through a long trail of problems and pressures, a community was consensually reduced to the status of effective slavery. One would need to go, as it were, through all the past paperwork to know whether the despotic power was in fact just or unjust, consensual or not. But when rights are inalienable, it does not matter what the paper trail says, whether people purported to transfer their rights to the despot in the past. The despotism is perforce wrong because the people never had the ability to transfer the rights in the first place. They were inalienable rights.

To return to the original question, then, what is the relationship between a Creator and inalienable rights? Moderns often take the god-talk in the Declaration as little more than a nod to the superstitions of the time. Jettisoning the god-talk, however, jettisons the possibility of rights being inalienable.

In Locke, for example, the reason that life is inalienable is because humans don’t own themselves, God does. No one can dispose of the life of another person because doing so trenches on God’s rights. This includes the human himself or herself: We cannot commit suicide because God owns our lives, not we ourselves. So, too, we cannot become slaves to another because we are already, as it were, God’s slaves. The irony is that the more abased humanity is before God the greater the dignity humans must accord to each other; liberty, as well as life and the pursuit of happiness, are all the more protected because of rights humans don’t and can’t have over themselves. They are “unalienable.”

I realize that I haven’t discussed what it means for the right to pursue happiness to be inalienable. The phrase “pursuit of happiness” is read so differently today than when it was written that it needs its own column to discuss. (Here’s a hint, although a likely unhelpful one: The King James Bible, the one used predominately in the era, renders, for example, Proverbs 3 as “Happy is the man that findeth wisdom.”)

Compromising Our Way to Ordered Liberty

The Journey of Indefinite Government

Between Us and the State of Nature

People can survive roads with potholes and even live without an education, but as Locke showed, they will always need police and a system of justice.