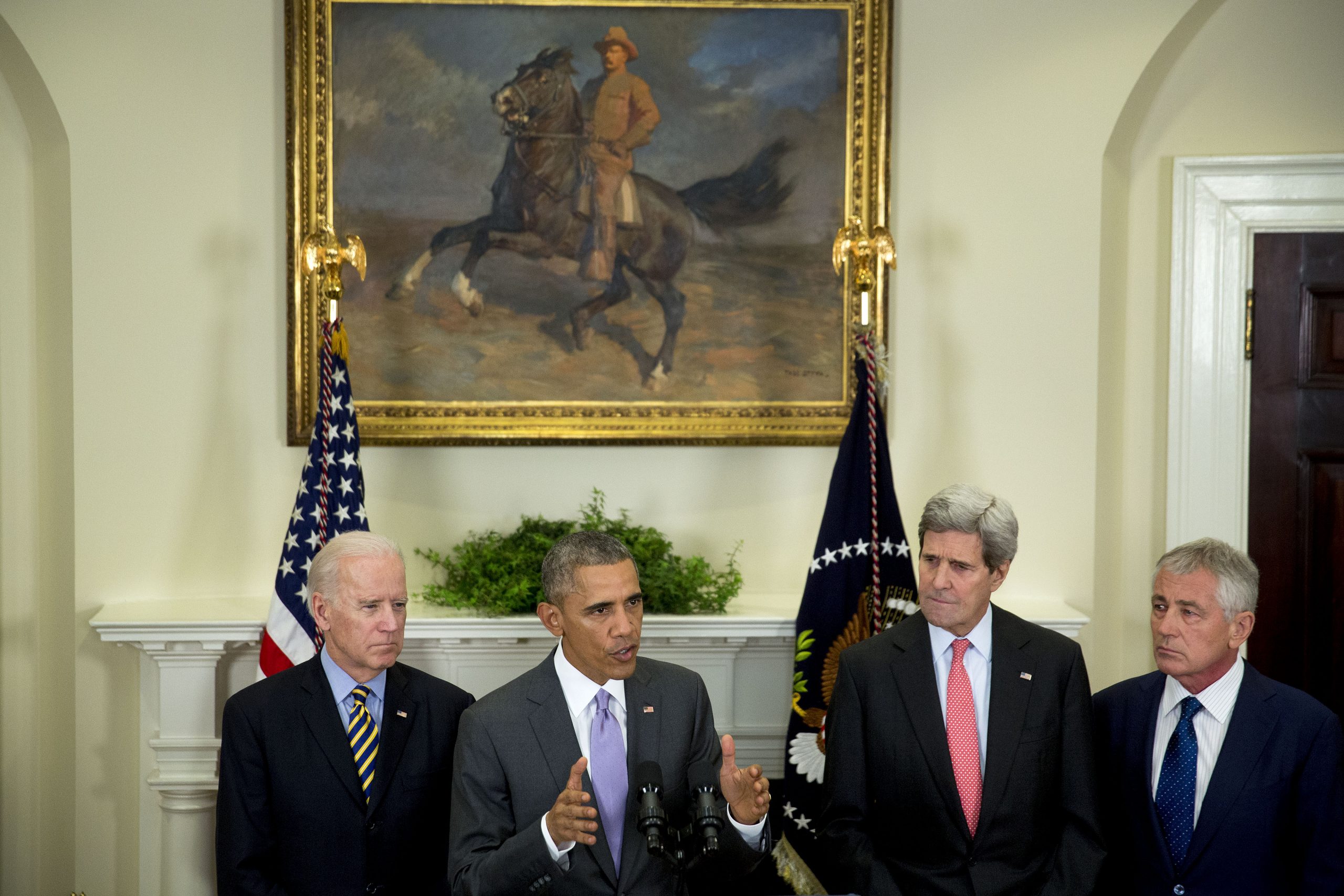 In the debate over the proposed new Authorization for the Use of Military Force, some have suggested that the President is asking to have his arms tied. In fact the move is cleverer. He is asking Congress to authorize what he has already done and therefore apparently thinks he can do anyway, and asking with enough modifiers—what is an “enduring” ground operation? who will decide how long it “endures”?—to vitiate any congressional limitations on his power.

The subservient party here is not the President but Congress, many of whose members apparently do not trust themselves to authorize military force without a three-year sunset provision attached. Thus does bad constitutionalism—Congress being unwilling to perform consequential oversight, including revoking permission for hostilities if necessary—yield bad policy. The result is time-limiting an ill-defined conflict in advance.

Good policy dictates that if the fight is worthwhile, it is worth fighting wholesale rather than telegraphing its termination date to the enemy. That, of course, requires precisely defining the enemy, the objective, and thus victory. Precision is also the only means of focusing legislative oversight and limiting presidential power. None of this has occurred.

Good constitutionalism, meanwhile, ideally requires a declaration of war. The so-called Islamic State, being a geographic and at least pseudo-political entity, is a reasonable object of that device. Good constitutionalism brings not just constitutional propriety but another advantage: clarity in the public and legislative debate. It forces a serious discussion among the American people and their representatives of provocations, purposes and prudence.

As to provocations, the barbarism of the Islamic State is an offense to humanity, and its brutal murders of Americans are offenses against the United States. As to prudence, it seems equally clear that these fighters intend to provoke a reaction, and that the group, being apparently unable to govern, must justify its existence by continual war.

Consequently, the conversation surrounding the ends—in the double sense of both purposes and termination—of this conflict ought to include the question that all major foreign policy decisions are supposed to provoke: “And then what?” The snake’s nest of the Middle East makes that question especially vexing and especially vital. The Islamic State likely owes some of its current territory to the failure to ask that question, at least with sufficient permutations, in 2003.

These are matters for Congress to take up. Madison reminds us that they present conflicts of interest for executives:

War is in fact the true nurse of executive aggrandizement. . . . It is in war, finally, that laurels are to be gathered, and it is the executive brow they are to encircle. The strongest passions, and the most dangerous weaknesses of the human breast; ambition, avarice, vanity, the honorable or venial love of fame, are all in conspiracy against the desire and duty of peace.

Madison’s point is that any executive power, regardless of who occupies the office, is to be regarded with suspicion. It is also to be controlled with oversight. It is pathetic that Congress’ self-confidence in this capacity is so low that so many members only trust themselves to vote for an AUMF with a three-year sunset attached in advance.

Keep in mind that this does not primarily bind them. It mostly binds the military to which they are handing what would already be a mission of immense difficulty. It also does so entirely unnecessarily, since members of Congress are the ones with the power to sunset an authorization for force at any moment simply by revoking or defunding it.

Yet like Odysseus, the senators and representatives feel they must be lashed to the mast. Of course, Odysseus at least had the excuse of the temptations of the flesh. What, precisely, does Congress fear being unable to resist? Presidential seduction?

They may be falling for it already. The AUMF the White House has proposed is either a recipe for defeat or a license for limitless power. Either it tells the so-called Islamic State what not to expect—enduring ground operations—and how long to wait (three years), or the former phrase is at the fungible discretion of the executive and the sunset will be easy prey to path dependence: Three years into a conflict, will a Congress that lacked the self-confidence to pass an AUMF without a sunset find enough gumption not to renew it?

It may be a question that Congress has to answer now, since the President is essentially asking the legislature not to authorize a new policy but rather to give its imprimatur to what he already asserts he has the authority to do. There may be a bit of a bluff here. A failure to pass an AUMF would clarify whether the President is actually seeking congressional handcuffs or not.

It would be better to find right now the gumption that the three-year sunset assumes Congress will need later. A good place to start would be where the President has not: his renewed promise, all but cut and pasted from his May 2013 speech at the National Defense University, to work with “Congress and the American people . . . to refine, and ultimately repeal,” the 2001 AUMF. The administration has done nothing to fulfill this commitment, which it is entirely within its power to keep. At this point the promise has all the credibility of a tippler’s pledge to quit after one more drink.

But Congress, the bartender serving drinks on an open tab it never collects, is equally culpable. Its apathy in dealing with the 2001 AUMF raises serious questions about the prudence of enacting another one.

This is profoundly unfortunate, since it may be—though this is unclear at best—that a well-constructed and constitutionally normal initiation of force would be wise. It certainly is the case that the debate provoked by such a proposal would be helpful.

But such an initiation would depend on two branches of government doing their jobs, and only their jobs. Congress would need to ask all the questions that a declaration of war entails, among them whether war is necessary, whether its benefits exceed its costs, what consequences would ensue, who the enemy is, and exactly what constitutes victory. If the answer to those questions confirms the prudence of war, the President—this one and any successor—ought to have all the authority to fight.

If it is not worth giving him or her the fullness of that authority, and exercising meaningful oversight over it, the fight itself is not worthwhile. Thus does good constitutionalism help clarify good policy.

It would be ironic if American politicians were insufficiently ambitious to sustain a system predicated on “ambition counteracting ambition."

The Case for Capitalism

Capitalism has brought greater economic wealth and cultural freedom to more people than any other system in the history of man.

The Power of Judges, Too, Is “Of an Encroaching Nature”: A Reply to Evan Bernick