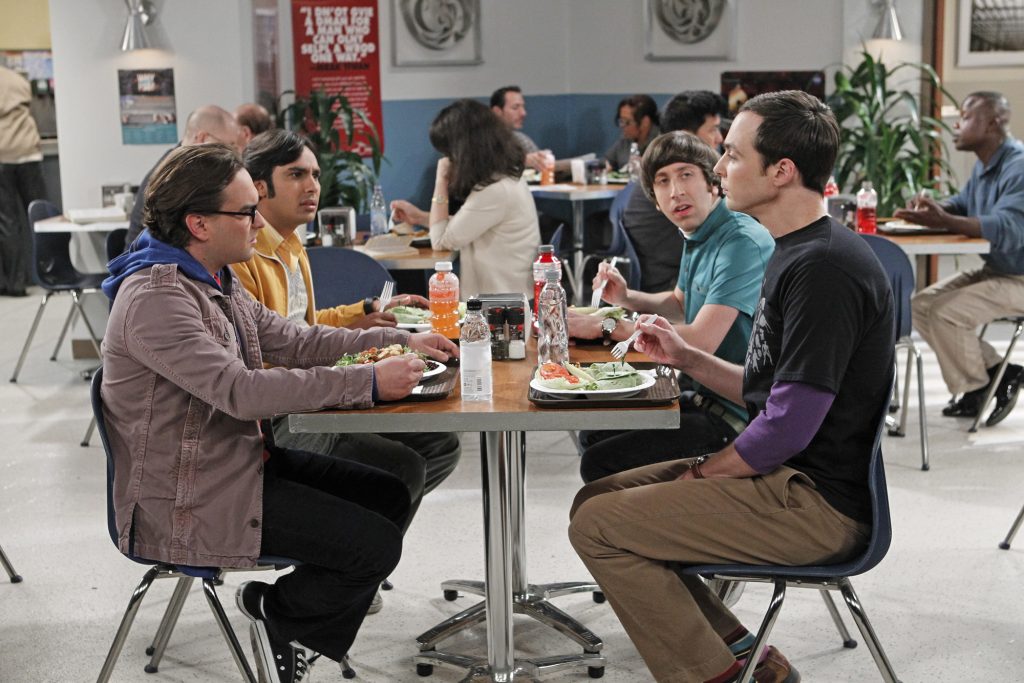 Sheldon faces a personal crisis after deciding he’s wasting his time with string theory, on THE BIG BANG THEORY.

Jim Parsons was pretty apologetic the other day, upon winning his fourth Emmy for playing Sheldon on The Big Bang Theory. “There’s no accounting for taste,” he said, acknowledging that the other nominees in his category, actors from sophisticated shows on premium channels (such as William C. Macy on Shameless), were much more accomplished performers.

Undoubtedly true. Yet despite its mediocre acting and laugh track, in some ways, CBS’ The Big Bang Theory soars as a show about science. On it, scientists are portrayed and ranked as human types. Their real claims for knowledge and excellence are examined and largely vindicated. They all err in thinking their scientific knowledge more comprehensive than it really is, but they perform real work that genuinely contributes to scientific and technological progress. And the main characters, even Sheldon, seem to be good people full of personal and relational promise. They aren’t frauds like politicians and priests, lightweight windbags like humanists, or manipulative tyrants obsessing about how to gain rational control over their fellow human beings.

That last sentence is, of course, unfair to humanists and priests. But recent experience in American higher education makes it less unfair than it should be.

The treatment of scientists in the show is deceptively subtle, and most instructive. The ranking of scientists as scientists is somewhat different from the ranking of scientists as personal and relational beings. Some would say television viewers are seeing caricatures, and that’s true enough. But that is the approach, after all, of classical comedy, which exaggerates so as to highlight what otherwise might be missed. We can even say that The Big Bang Theory teaches us a lot about the real effect—mostly benign—of the best and the brightest STEM majors on our society. The technological impact is huge, if mostly indirect; the personal impact rather marginal.

The aerospace engineer, Howard, only cares about meeting basic animal needs. In his day job, Howard has employed his mechanical knowledge to construct the space station’s toilet. A memorable episode also has him ingeniously and creepily using a robotic hand to replace his own hand for personal satisfaction. A technical failure leads to a hilariously awkward trip to the emergency room, where the engineer is revealed as less practical than the ER receptionist. (She resolves the crisis by simply unplugging the device.)

The stupidity of engineers in general is in believing that there can be mechanical solutions for singularly human problems. The engineer in this show becomes less stupid when he’s lucky enough to have his life shaped by real women, and he’s able to rather easily find space in his life for a wife and children to come (not to mention a rather monstrous mom). Howard is usually more attuned to the concerns of other human beings than he makes himself out to be, apt as he is to deploy words as if they were the weapons of a networking engineer.

Engineering, being merely technological, is from an intellectual view the lowest form of physical science. The main character, Sheldon, thinks of it as “semi-skilled labor” not unlike plumbing. We’re often reminded, mainly by Sheldon, that Howard doesn’t even have a Ph.D. We’re also often reminded that the theoretical physicist Sheldon has a higher IQ than the experimental physicist Leonard (187 versus 173), and that all experimental physics is derived from the work of the theorists.

The astrophysicist Raj seems to be the theoretical physicist’s intellectual equal. When Raj and Sheldon briefly worked together, they were clearly on the same level. The difference is between wondering about “string theory”—for which there is no visible evidence—and wondering about the stars we can actually see. Raj’s preference for visible beauty extends to his metrosexual fashion sense, to being so smitten around attractive women that he becomes tongue-tied, and finally to a kind of cosmological romanticism that erotically charges all that is human and nonhuman for him.

As a pure theorist, Sheldon understands himself as a mind stuck in an alien body. The world, for him, is the home of the human mind, and that makes him a transhumanist who longs to be liberated from physical constraints; only then would he feel fully at home. He is intellectually very erotic, but physically (on the show so far) not at all. He’s given assurances of having functioning genitalia but no relationship has popped up that would, as the empiricists say, tend to corroborate this. There’s a tradition of thought that includes Plato, Saint Augustine, and Rousseau that connects physical eros with the intellectual form. But the experience of Sheldon (as well as the Socrates who appears in Aristophanes’ play The Clouds) suggests otherwise. The perennial stereotype is that the physicist is self-forgetful, an absent-minded professor. The perennial physicist’s response is that true science isn’t about ephemeral particular human beings, even physicists. Physics so understood is part of philosophy, which is about learning how to die or get over yourself.

Sure, Sheldon, like many great scientists, is childish, and neurotic about his personal routine, also vain and petty and all that. But unlike a politician or a professor of the humanities, he authentically and with good reason believes he is taking his stand on what he really knows. It’s true that Sheldon, who can’t be bothered even to learn to drive, is infantile in his unconscious and ungrateful dependence on his friends, but that’s because he really thinks he deserves relief from the frictions and challenges of life, physical or emotional, which would only get in the way of his mind.

Many critics have noticed that Sheldon’s social cluelessness and quirkiness can be explained as all the symptoms of Asberger’s Syndrome. We’re left to wonder whether his highly unrelational and theoretical life has a primarily intellectual or physiological cause. Still, we do know Sheldon is far from amoral. He considers himself bound by the contractual obligations that govern all sensible relationships, and any practice of deception or other offense against the truth consumes him with guilt. His moral guide, unsurprisingly, is Star Trek’s Mr. Spock, who appears to Sheldon in a dream to set him straight.

Leonard, the not-quite-genius experimental physicist, ranks below the theoretical physicist but above the engineer. He’s not at all inspirited by his fairly unoriginal and uncreative work, and he’s more determined by his body than Sheldon is. Leonard is, to a point, a miserably self-conscious nerd, just as Sheldon is mostly a serenely unconscious one. He’s short, physically weak, lactose-intolerant, and emotionally needy. As the self-proclaimed “king of foreplay,” he is determined to put first the needs of any woman who’ll have an intimate relationship with him. He doesn’t seek pleasure divorced from emotional, relational baggage, as even women, he finds out to his dismay, sometimes can be.

Leonard is also a loyal friend to his fellow nerds from the show’s beginning. He typically acts as if he knows that he’s more than a mind caught in a body, and he readily identifies with the heroic Frodo of The Lord of the Rings. Leonard is graced by nature with what it takes to be a gentleman, and so he easily learns how to treat women. We see more than once that he really will do virtually anything—including undertaking a gallant quest seemingly doomed to painful failure—for the woman he loves. At his best, the idealist Leonard soars above his physical limitations and pathetic neediness in ways none of the other characters do.

That’s not to say that Leonard doesn’t share the scientist’s moral devotion to the truth about the physical world. One thing he won’t do is tell the woman he loves that astrology makes a lick of sense, and he chooses the truth of “string theory” over an enduring relationship with a brilliant and attractive theoretical physicist, Leslie. Leslie, by the way, seems to be the show’s smartest character. She gleefully corrects an error that had stifled the progress of Sheldon’s theorizing. Not only that, her good reasons for string-theory denial have been vindicated on the show by Sheldon’s recent abandonment of it as a futile pursuit.

Leslie—played by Sara Gilbert as pretty close to her smart-ass but deep character of years ago, when she was the middle child on Roseanne, but with the added confidence of education and success—routinely leaves the “dumb-ass” Sheldon speechless. Sheldon’s long-suffering girlfriend, the experimental scientist Amy Farah Fowler, is also certainly a better scientist than her fellow experimentalist Leonard, and she ends up being as in touch with her real physical and relational needs as Leslie is.

Needless to say, the show doesn’t offer the sexist message that men are more hardwired for science than women. By the same token it tilts, not crudely but only slightly, in the direction of concluding that female scientists find it easier than male ones not to have overly abstracted personal lives. The most unrelational scientist in the show, after all, is Leonard’s neuropsychologist mom, who thinks and mostly acts as if all human behavior, including her own, can be explained completely as a mechanism. That’s why she’s been satisfied with taking full responsibility for her own orgasms for a couple of decades or so. She, unlike Sheldon, is a sociopath.

It would be easy to conclude that these nerds would be nobler if they had better “role models” than the ones they mention, which are mostly found in comic books and science-fiction and superhero TV and movies. One reason they’re so charmingly and fecklessly childish is that they don’t seem to read great books or follow real political life. And they know nothing about business. They earn decent enough money and have such modest material wants (with an exception or two) that they readily pay their bills without giving them a second thought. An enduring argument for choosing the scientific way of life is that it won’t be hard to keep your desires from exceeding your material needs.

They also know so little, in some ways, that they confuse real theology with Texas fundamentalism. They’re far from ready to connect their personal longings with being open to a personal Creator. Their atheism, unlike their physics, is dogmatic.

We can say they’re victims of the mistake that was the artificial and deeply false separation of the social sciences and the humanities. It’s that mistake, apparently, that has allowed our scientists and engineers to make real progress with rational confidence, even at the expense of human wisdom. That criticism is not as telling as humanists wish it was; the humanists’ relativism clearly undermines decent relational life more than the scientists’ scientism.

The men and women on The Big Bang Theory are, from the beginning, good and serious, and they’re really growing in self-understanding and in embracing the responsibilities that flow from personal love.

Now for a Really Destructive Innovation: A Europe-wide State