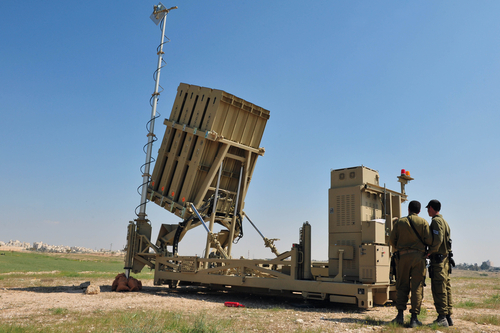 Images of Hamas’s artillery rockets being intercepted by Israel’s “Iron Dome” missile defense system naturally lead Americans to wonder why, if missiles were fired at our homes, we wouldn’t go to the trouble of stopping them in mid-flight as the Israelis do. The answer is that our bipartisan ruling class decided half a century ago that even trying to protect America against all but token missile attacks would be a hostile act toward Russia and China.

A fog of technical misunderstanding veils that fundamental fact. Many who continue to oppose comprehensive U.S. missile defenses maintain that defending America against long-range missiles is far more difficult than defending against swarms of artillery rockets. The value of Israel’s “Iron Dome” for America is as a technical demonstration that the contrary is true.

The Iron Dome is a straightforward, ground-based, radar-and-rocket interceptor system, of the kind used to stop aircraft. The radar sees, tracks, and locks onto the target long enough to launch an interceptor toward a predicted point of impact. The interceptor then closes in by a thermal sensor and explodes near the target. It is more technically sophisticated than ordinary anti-aircraft because the radar and its computer must deal with many targets at a time, all of which have high angular velocities.

The cost of each Iron Dome “shot” to destroy a single incoming rocket that costs $1,000 is about $60,000. This is far from ideal. Opponents of missile defenses often cite the unfavorable “cost-exchange ratio” between offensive missiles and ground-based interceptors as a reason not to defend. Nevertheless, Israelis are thrilled to have Iron Dome.

Opponents, moreover, say Iron Dome would not suit us because the missiles that would be coming our way would be from far away and would come over the horizon many times faster than artillery rockets. Using ground-based interceptors to defend against longer-range missiles requires, above all, launching them early, on the basis of information best provided by infra-red satellites rather than by radars. Moreover, missiles carrying nukes have to be dealt with far away.

As I have explained to the readers of Law and Liberty, doing this is entirely possible, but the U.S. government has chosen not to. In addition, a look back at Iron Dome’s technical history shows that, available to the U.S. government is a means of defending against missiles that is far more effective than any ground-based system.

Prior to Iron Dome’s adoption, Israel’s choice for defending against artillery rockets had been a device called THEL (Theater High Energy Laser.) Tested at White Sands, New Mexico and then in Israel, THEL was essentially a scaled-down, ground-based version of the space-based laser developed by Lockheed Martin and General Dynamics in the 1980s and 1990s. (See this New York Times article from December 1994.)

This device generated laser power by drawing the products of the combustion of hydrogen and fluorine hypersonically into the vacuum of space. A series of mirrors shaped the beam. A holographic pointer-tracker would have shifted it by fractions of degrees onto missiles rising into space more than a thousand miles away. A dozen of these, stationed in mid-altitude orbits, would have prevented the entry into space of any missile of which the United States disapproved. But since the U.S. government chose not to use the technology for that purpose, Israel became interested in adapting it for its purposes.

Downgrading the system for ground use took some doing. Generating a chemical laser beam on the ground is more difficult than in space because, in the absence of a natural vacuum, the device must hypersonically extract the gases by force. Therefore, each shot requires expending a cylinder of compressed air. Pointing and tracking targets a few miles rather than thousands of miles away requires rapid slewing over wide arcs rather than minute holographic adjustments. Nevertheless, the THEL’s capacity to hit incoming rockets instantly and quite cheaply almost led Israel to adopt it. But it had one fatal drawback: atmospheric humidity hinders laser beams. Clouds and rain stop them. Even in Israel, sometimes it rains.

The development of this high-energy laser anti-missile system into prototype status for use on the ground—something technically far more difficult than using its technology in its natural medium of space—shows how feasible it would be for the U.S. government to defend the American people against ballistic missiles from anywhere.

Alas, technology has never been the reason why the American people are not now and never have been defended against ballistic missiles. The reason is an ideology that continues to grip our bipartisan ruling class. But Israel’s experience with the Iron Dome and with THEL shows that, where there is a will, a multitude of ways is usually available.

The Path Not Taken