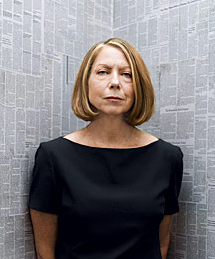 The firing of New York Times editor Jill Abramson has excited controversies for the wrong reasons. The bicker over sex discrimination ignores the most fundamental issue: her integrity as a journalist. While I have never followed her writing with care and have never met or communicated with her, she (together with her co-author Jane Mayer) has written about me. In Strange Justice: The Selling of Clarence Thomas the coauthors claim to reveal “falsehoods and distortions involved in the selling of Clarence Thomas….” I do not wish to revive any interest in this vile book, but to address Abramson’s recent notoriety I will draw from a note I wrote to various interested parties Nov. 13, 1994 on the appearance of the book, its immediate nomination for a National Book Award, and its error-ridden discussion of me.

I served as a special assistant to then-Equal Employment Opportunity Commission Chairman Thomas from 1986-1990. We met in the fall of 1985, following his reading of some short pieces I had written on civil rights issues. He offered me a position in which I would think about civil rights issues and how they address both the political quarrels of the day and, more important, the political principles of a free people. I communicated my thoughts through memos, conversations, and occasional drafts for about a dozen speeches. I introduced him to thoughtful students of these issues including political theorists Edward J. Erler, Thomas G. West, John A. Wettergreen, and John Marini. I later discovered that of all the prominent Washingtonians in high (or even middling) positions, he was rare if not unique in his grappling with ideas and his instinct for seeing how they illuminated the workings of Washington.

Here I will confront their own falsehoods and distortions in their startling, half-page or so account of me (p. 141 ff.). (Since they do not attribute particular chapters to each co-author, I have to assume each takes responsibility for the whole book.) They call their chapter on the EEOC “The Turkey Farm,” following the reputation the agency received as a “dumping ground” for “otherwise unplaceable political employees.” From 1985 on, they allege, Thomas steered the Commission in a rigid conservative direction to gain approval (and future elevation) from conservatives at the Justice Department and White House. If that were in fact his motive, he had a bizarre way of doing it.

The emptiness of their assertion is seen in their own admission: “on August 12, 1986, Thomas won unanimous Senate confirmation to a second term.” The “gala swearing-in at the EEOC” was attended by “his former nemeses—[William Bradford] Reynolds, [Edwin] Meese, and South Carolina’s Senator Strom Thurmond.” They omit prominent representatives of the litigating civil rights-community who backed his confirmation, such as the head of the NAACP Legal Defense and Education Fund. I even now recall the complicated handshake among Thomas’s diverse supporters. These omissions illuminate Mayer-Abramson’s approach throughout the book—telling half-truths that completely distort reality.

They claim that “Stricter ideological enforcement caused changes throughout the agency.” In fact, Thomas’s chief of staff, conservative Jeff Zuckerman had been defeated in the Republican-led Senate for nomination to the General Counsel post. Senator Ted Kennedy assailed Jeff at his contentious hearing for recommending that senior staffers read Thomas Sowell (which he pronounced sow-el). He was then replaced by “moderate [sic. liberal] Democrat” Pam Talkin (who is now Marshall of the Supreme Court).

In truth, this Agency could not be run “ideologically”—that’s why Thomas insisted on a diverse staff of professionals. There were fans of Jesse Jackson though not of Jesse Helms. I recall at the time of Judge Thomas’s nomination to the Supreme Court a statement by one of the civil rights groups (I believe the NAACP Legal Defense and Education Fund) praising his leadership of the Commission, while deploring the marked change of tone in his post-1986 speeches. Examination of the facts makes the Mayer-Abramson account not just fall apart but actually implode.

A dozen or so errors about me are significant in displaying the sloppiness and invective of their work: They describe me as a “law professor at the University of California at Irvine.” This appointment anticipates the opening of the law school at UCI by about 20 years. (I had taught a single constitutional law course in political science.) I am further described as being a “follower of the arcane conservative legal thinker Harry Jaffa, a professor at Claremont College [sic.] who had risen to fame by writing Barry Goldwater’s famous apologia for fanaticism….” Jaffa was and remains my teacher, having introduced me to political philosophy as an undergraduate and advised me on my dissertation on Aristotle.

While American constitutionalism is a major theme of Jaffa’s work, his first book on constitutional law, Original Intent and the Framers of the Constitution, appeared in 1994 and consists largely of vigorous polemics against Chief Justice William Rehnquist, Judge Robert Bork, and Meese. (A second volume, Storm Over the Constitution (1999), continues with the same arguments against legal positivism, including attacks on Justice Antonin Scalia and exchanges between him and ace conservative litigator Charles J. Cooper, which prove illuminating today.) Jaffa’s “fame,” such as it is, certainly rests on his classic study of the Lincoln-Douglas debates, Crisis of the House Divided (1959). Moreover, it is hardly common knowledge that he authored Goldwater’s “extremism in defense of liberty line,” as other Goldwater staffers claimed their adoption of Aristotle’s notion that moral excellence is to be found in a mean or middle, which is at the same time an extreme.

“Jaffa and Masugi,” they write in an exasperating sentence, “were among the cult-like followers of the German philosopher Leo Strauss.” Almost as bad, “The so-called Straussians considered themselves an intellectual elite, capable of understanding higher meanings in classic texts such as Machiavelli’s Prince, which they believed lesser minds [undergraduates?] could not truly fathom.” Strauss was of course an American, a Jew born in Germany, who fled Hitler. Scholars ridiculed him for describing Machiavelli as a teacher of evil, though of course he wrote far more on medieval and classical political philosophy than on the moderns. The combination of being a German interested in Machiavelli is of course designed to portray the Goldwater extremist Straussians as the real, secretive teachers of evil, a preposterous charge that, incredibly, would later be spread by various opportunists in journalism, academia, and the arts.

Noting Thomas’s interest in Ayn Rand, they claim that “Masugi and his like-minded colleagues would take [Thomas] several ideological steps further [than Rand!?], writing some of Thomas’s most controversial speeches on esoteric philosophical subjects.” [1] In fact, I wrote Thomas a scathing memo about Rand’s atheism and contempt for families, after he had me read the crime against literature known as Atlas Shrugged [2]. (But I enjoyed viewing, and later reading, the nonetheless deeply flawed Fountainhead.) Mayer-Abramson then conjure wild meanings of the natural law political philosophy of the Declaration of Independence, speculating that this higher law would permit politicians to disregard written laws. (This abolitionist understanding of natural law was shared by conservative critics of Thomas as well.) In fact the radicalism Marini and I proposed to Chairman Thomas was the radicalism of the American founding—the the only sound philosophic basis for the originalist jurisprudence that has justly won him acclaim.

I concluded my page and a half 1994 memo with some flawed predictions: “Mr. Justice Thomas will go on to earn justifiable fame as a Justice of the Supreme Court.” I understated his achievement. Then I predicted of Mayer (long with The New Yorker, a periodical somehow renowned for its fact-checking) and Abramson that they “will … remain in the depths of journalistic obscurity, whose precincts seem entirely suited to the mediocrity of their talents and the depravity of their ambition.” I grossly erred on their obscurity. [3]

[2] One unsigned memo of mine, critiquing Judge Robert Bork’s judicial philosophy, stirred some controversy in his confirmation ordeal, when it was thought to be from Judge Thomas. The memo made The Washington Post and brought me to a room at the Department of Justice where Lee Liberman directed me to comb through all the many boxes of his writings and pull any other noxious writing by me.

[3] Postscript: I faxed copies of my Strange Justice memo to various conservative journalists, one of whom, David Brock, reprinted sections in his American Spectator review,verbatim, without acknowledgement. http://dailycaller.com/2011/06/06/david-brock-on-jill-abramson-no-comment/ At least one other writer who had also received my memo noted the coincidence.

One Cheer for Scalia on Legal Education

The win for Little Sisters of the Poor isn't the nightmare the media describes. But in another way, it does point to a dysfunctional constitutional order.

The Constitution as Law Nested in Other Law

The Constitution’s original meaning allows for precedent, but does not specify the particular precedent rules that should be followed.