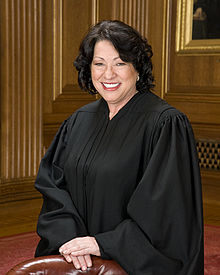 Tomorrow the Supreme Court will issue its opinions in the marriage cases.  Today, in a less prominent case, the Court treated the issue of parental, and more particularly, paternal rights.   As I’ve discussed here, there is a constitutional presumption in favor of natural-parental trusteeship, a presumption that is in tension with the contradictory presumption that arises where the state recognizes same-sex relationships as marriage.

Today’s case, Adoptive Couple v. Baby Girl, involved a statutory, and not a constitutional, issue.  Still, the dissent , authored by Justice Sotomayor, took pains to mention the constitutional presumption that I’ve emphasized.   There is, she wrote, a “presumption that a natural parent will act in the best interests of his child.”   This preference “is founded in the ‘presumption that fit parents act in the best interests of their children.’ Troxel v. Granville, 530 U. S. 57, 68 (2000) (plurality opinion). ‘[H]istorically[the law] has recognized that natural bonds of affection [will] lead parents’ to promote their child’s well-being. Ibid. (quoting Parham v. J. R., 442 U. S. 584, 602 (1979)).”   She argued that the statute should be interpreted broadly, in a manner consistent with this important presumption.

Justice Sotomayor was joined in her dissent by Justices Ginsburg, Kagan, and Scalia.  He likewise emphasized this presumption: “It has been the constant practice of the common law to respect the entitlement of those who bring a child into the world to raise that child.'”

I think Justices Sotomayor will see the implications for the marriage case.  Traditional marriage fosters the child’s enjoyment of both parents’ care and custody.  The new marriage does not, and instead makes it (somewhat) less likely that children will enjoy natural-parental care.

Because of Justice Sotomayor’s opinion today, I will venture an unorthodox prediction: if the Court reaches the issue of Proposition 8 on the merits, she will vote with Justice Scalia to sustain the validity of the traditional definition of marriage, much as he voted with her today in favor of the complementary, traditional rights of children and parents.

How the West was Won

Little Sisters, Would You Please

Understanding Love and Marriage with Rousseau

Reading Rousseau may help us sort out our love lives, but we have to think like the ancients to make good on his ideas.