A reporter for The Nation magazine looking for a partisan “color” story cornered me at the 2014 Conservative Political Action Conference, asking what I thought of Chris Christie. I took the chance to remind his magazine’s audience that both parties in American politics have been adopting similar habits of lawlessness, and that continuing to confirm those habits has dire consequences.

The Nation ‘s reporter was in luck. I had graduated from Fort Lee High School in 1960, a stone’s throw from the traffic jam that Christie’s appointees had famously engineered. I told him that, as a kid I had gotten acquainted with lots of Chris Christie types while delivering the Bergen Evening Record on my bike in the town’s tonier parts. 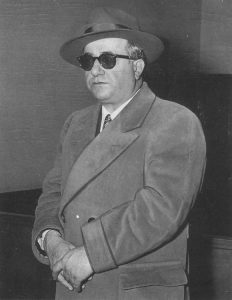 My route’s customers included Albert Anastasia, head of the famous “Murder Incorporated” Mafia outfit, as well as one of his associates, Tony “The Bender” Strollo. Guys like that tipped well. As for Governor Christie, I have no way of knowing whether he personally ordered “the” traffic jam. But he and his aides sure talk and act like the Fort Lee types for whom doing such things, and more, was a way of life.

The reporter, thinking he was hearing a “hit” on Christie, asked:

“So you wouldn’t want Christie for President?” I answered: “Not any more than I would want Tony “The Bender” or Barack Obama, and for the same reason.”

What’s that? he wanted to know. I replied:

“Lawlessness. These guys seem alike in that they want what they want, regardless of rules. They are nice if you play ball but hurt you if you get in their way.”

My point was that government officials’ use of unlawful, discretionary power—little different from the Mob’s—is becoming the rule rather than the exception in America. If we don’t like that, we have to learn to shun people who operate this way—especially if they belong to our party.

Having gotten the reporter’s attention, I then explained that lawless politicians of any party are more dangerous than gangsters. The latter dispose only of private power, while the former have in their hands the enormous powers of modern government.

Whereas any Albert Anastasia could send a few guys like Tony to “bend” you, any Nixon or Obama has countless minions who can get the IRS to audit you, or to screw you administratively in countless other ways—by writing agency regulations aimed at you, say, or by finding you in violation of regulations you may never have heard of, or by indicting you, or maybe just investigating and ruining you without ever bringing you to trial. Or they can include you in a group to be taxed while granting exemptions to others in the group, leaving you to pay a higher rate. The latter is happening under Obamacare.

Fouling up traffic in your neighborhood, as Christie’s aides did, is mere foreplay.

More important, I told The Nation, whereas the Mafia dons who were brought up before Senator Kefauver’s committee in the 1950s elicited bipartisan contempt when they “took the Fifth,” today’s investigations of lawlessness produce results that should scare us all.

Namely: After the IRS harassed Barack Obama’s and the Democratic Party’s opponents during the 2012 election cycle, the Democratic members of the congressional oversight committee before which the officials who had done the harassing appeared supported them. When Lois Lerner, the most obviously responsible of these officials, “took the Fifth” and the committee chairman sought to hold her in contempt, the Democratic contingent moved to censure him. No less than the President of the United States stated categorically that there had been “ not one smidgen of corruption” in the IRS. Then, the same officials drafted rules that would regularize precisely their authority to target for invidious treatment whichever political organizations they wish. Tony “The Bender” could never have managed hits like that.

The problem is that the habit of using public power to do personal damage to your opponents is putting down deep, bipartisan roots among us. Since 2007, the Democratic Party has used its majority in the Senate to transform that body—and with it much of the U.S. government—by essentially restricting votes only to motions of partisan convenience. As I have described in previous columns, this—among other things—has emptied of practical significance the constitutional requirement that “no money shall be drawn from the Treasury except by appropriation…” But the Republican leadership, when asked whether any future Republican majority would undo all that the Democrats have done to the Senate, equivocated.

And why not? President Obama, shielded by a Senate majority in partisan lockstep with him, has chosen not to enforce laws on the books, or to enforce only parts of some while re-writing others, or simply to rule by decree. It would be difficult for the next Republican president and senate not do the same, and more. No one in power seems to be searching for ways to get back to non-thuggish government.

In sum, Chris Christie may be louder than most about his impatience with and disdain for those who stand in his way. But substantively, he is very much within the modern bipartisan tradition of Barack Obama, Harry Reid, and the Republican Establishment. This is our ruling class. The opposition to it consists of outsiders: the Tea Party faithful, the pro-life organizations, the NRA, the Club for Growth.

Once upon a time, when the Mafia used to deny that it existed, rather calling itself cosa nostra, “our thing,” America threw the book at it. Today, our ruling class denies that it is a class, calling itself “the mainstream.” Its bipartisan members deserve a rejection no less vigorous.

Constitutional Presidentitis: Is There a Shot for That?

The Wrath of Cons