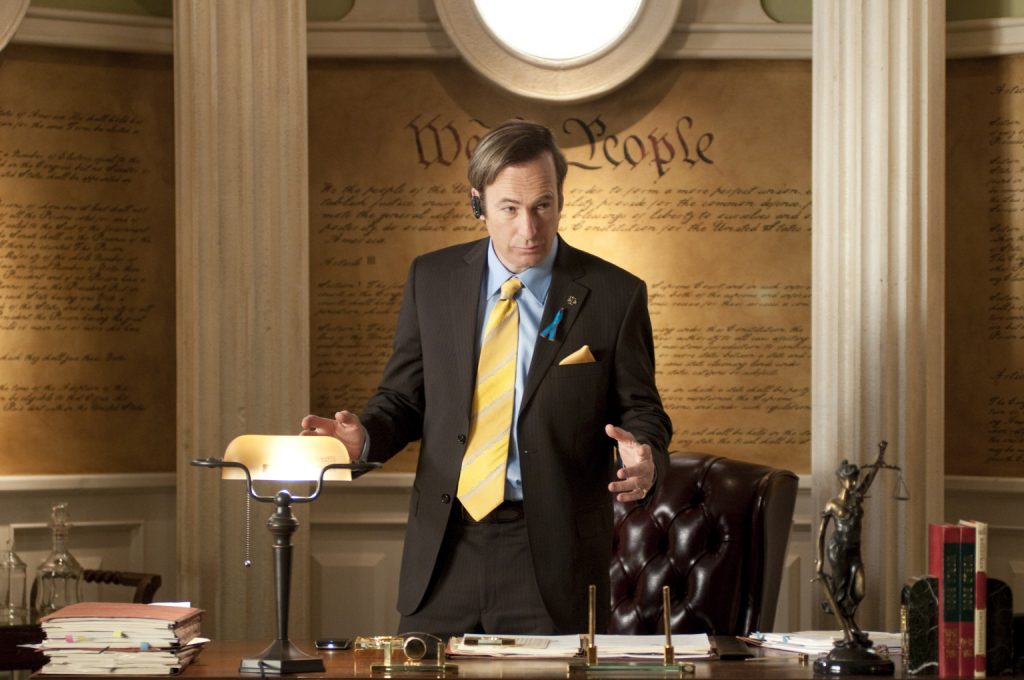 This site features an excellent Liberty Forum discussion this month on the future of legal education. If Ken Randall is right about a “blue ocean for law schools” (and he probably is), it looks like a lot of them will be traveling online, providing a needed service for those who only want a ticket to take the bar. As the profession gets more entrepreneurial, the argument for taking this route gets stronger.

The fine television show trumpeting this approach is Better Call Saul. There, a down-and-out guy turns his life around by getting a very sketchy law degree online and then passing the bar after several tries. Then his entrepreneurial drive pushes him to do all the leg work to ferret out evidence for a vast class-action suit against an unscrupulous chain of old folks’ homes. It’s impossible for this guy to deal singlehandedly with the deluge of paperwork that the defendant’s lawyers begin throwing at him. Reluctantly, he turns this potential goldmine of a case over to a big firm—his brother’s, where he himself had been condescended to with a job in the mail room.

The firm is willing, of course, to pay a handsome finder’s fee, but refuses to accept him as an actual associate working on the case. Reason: He’s not a real lawyer. He didn’t pay his dues by going to a real law school. Abstracting from issues of brotherly love and loyalty—he finds out that his brother was the one who quietly nixed him as an equal collaborator—why is that elitism repulsive?

Because everyone knows that the practice of law at its best in our country is really about making money by using the law to protect clients from those who would abuse them. Anyone who can do that (after passing the bar) deserves all the perks of being an attorney. So in the spirit of Better Call Saul, it doesn’t bother me that legal education is going to be radically transformed by this innovative disruption, because it’s never really been (for the most part) liberal education anyway.

I’m libertarian enough to welcome reforms that make access to the bar easier. I would, however, also make that bar exam more challenging.

Even if the expected growth of online education, and specifically online legal education, came more slowly than its advocates are predicting, we would still be in a situation where the general quality of law school grads continued to worsen. There are, as Randall reminds us, many more seats available in accredited law schools than people who can be suckered into filling them. Hence more law schools are pretty close to open admissions now. Few people actually flunk out of law school, and that’s unlikely to change in the current climate.

Law school grads will be dumber and more ignorant than ever. Given that the law schools (inevitably) will fail us as gatekeepers, we need to put greater weight on the bar exam. In many cases, it’s perfectly appropriate to take it several times (and experience a beneficial learning curve) before passing it.

On the other, perhaps less cynical, hand, I do hope that some law schools will take this “market challenge” as an opportunity to get better at teaching, which means using the more “engaged” and even student-sensitive modes found at the better residential, liberal arts colleges. It also means paying a lot more attention to developing student writing and maybe even doing more to connect the law’s technical skills with a genuine appreciation of the philosophical dimensions of constitutionalism. If our judges now get to just make up what liberty is for our generation, they need to know a lot more about what liberty is.

Most law schools, admittedly, aren’t going to move in the direction of liberal education. For one thing, it would make legal education more expensive, at a time when its market value is in most cases dropping. For another thing, it would make law professors have to work harder as real teachers, surrendering much of the time they’ve been able to set aside for their (usually unremarkable) research. And finally, it’s just not true that most aspiring lawyers have their eyes on being federal judges, and so their work doesn’t really involve being philosophic and all that.

Still, it’s reasonable to hope that in some cases, law professors will see that this approach might be the one that can best justify their school’s big tuitions (and big student borrowing) to those aspiring lawyers who have the resources or want to take a noble risk.

It should be pointed out, as well, that even the best undergraduate schools have a thing or two to learn from law professors. The latter grade blindly, have high or at least uniform standards, and usually neither play favorites nor concern themselves much with students’ feelings. There’s something to be said for the consumer insensitivity that has distinguished our traditional legal education, although it may have been possible because said consumers thought themselves to be (and often were) guaranteed lucrative and secure employment as the reward for enduring all that John Houseman coldness.

For those students who (often quite reasonably) choose the discount-route to the law degree that computers make possible, it’s probably more important than ever that their undergraduate degree come at the end of four years of a very bookish liberal arts education. The remarkable results achieved by the guy on Better Call Saul notwithstanding, it’s generally the case that success in the law will depend on your capacity to pay close attention to long and tough (and often boring) tests, to read and absorb long and boring documents, and to deploy words adeptly—the latter a skill that involves grasping the extent to which words correspond to real life, and the extent to which they’re rhetorical or pseudo-technical baloney.

It will be more and more possible, in future, to get to the bar without mastering such skills. That means you’d better get to law having already acquired them.