The home and birthplace of John Adams—and his son, John Quincy Adams, diplomat, president, legislator and, most important, translator of the indispensable The Origins and Principles of the American Revolution, compared with the Origins and Principles of the French Revolution, more on which presently—sits on Hancock Street in Quincy, Massachusetts. The next time a U.S.-French Presidential duo desires a photo-op at the home of a historic American executive, they might skip Monticello and visit the Adams manse instead. It is, to be sure, a haul from Washington, but they have airplanes. It might be educational for both, and—Adams having been right on the subject, and Jefferson abjectly and admittedly wrong—it might also moderate the implicit but ritualistic praise due on these occasions to the spasm of atrocities called the French Revolution. 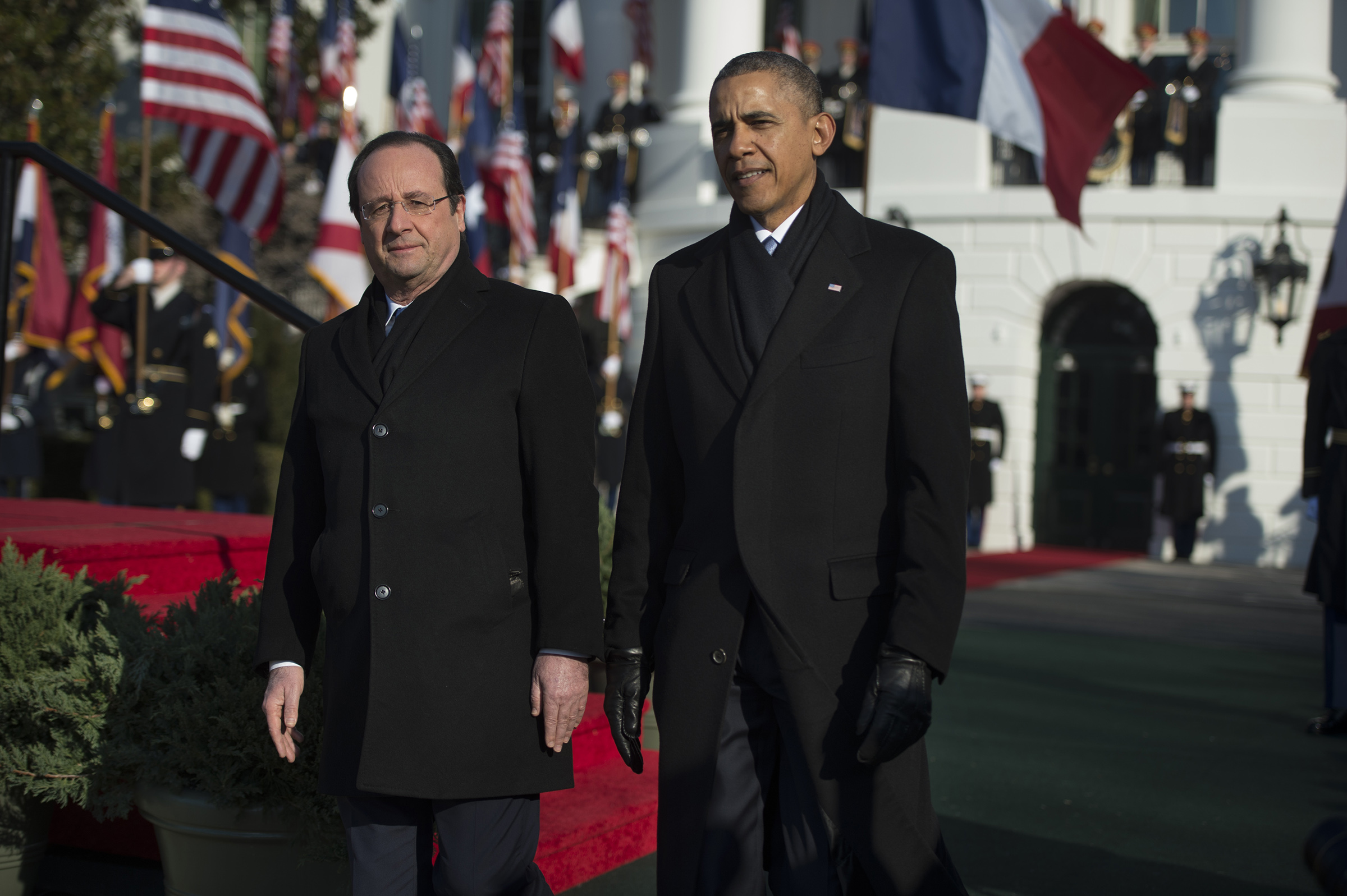 President Francois Hollande of France arrives for a State visit in Washington, DC

The exchanges of niceties, remarks, and toasts between Presidents Obama and Hollande at various times during the latter’s state visit likened “life, liberty and the pursuit of happiness” to “liberté, egalité and fraternité” (Obama); related “human rights” to “the rights of the citizen” (Hollande); and equated the Declaration of Independence to the French Declaration of the Rights of Man (both). Lest it be thought this fawning is partisan, Secretary of State Condoleeza Rice declared to a French audience in 2005 that “[t]he founders of both the French and American republics were inspired by the very same values, and by each other.” (George W. Carey: “rank heresy.”)

In fairness, these were diplomatic exchanges, not theory seminars. The French are not going to be disabused of the civic folklore surrounding their Revolution, nor is it the job of American Presidents to try. But need we perpetuate the flowering mythology of our own rights culture by linking our constitutional tradition with false and pernicious symbols that do honor to neither side? It is not as though a nation that produced De Gaulle is so impoverished for glories that the Revolution is the only available topic for toasts.

Vast gulfs of theoretical grounding, not to mention historical outcome, separate the American Revolution from the French. The German writer and statesman Friedrich von Gentz, having first been enchanted with the French Revolution, then translated Burke, set out in 1800 to detail the exact differences. The resulting work, which John Quincy Adams translated into English, identified four core distinctions.

First, the American Revolution was rooted in law. Here the fallacy of Hollande’s linkage—implicit but evident—between the “rights of man” and the “rights of the citizen,” spoken if not in equation then certainly in the same breath, is clear. The American colonists revolted based on the deprivation of their rights as British subjects, which, in Burke’s language, were their “entailed inheritance,” the product of a long and, crucially, particular political tradition. The French asserted a “right of man” to revolt—this as opposed to reform, a privilege Gentz reserves to them—without regard to their own constitution. There is a difference; several, actually, but most important is that one is identifiable and therefore limitable, the other not.

Second, the American Revolution was defensive in character; the French Revolution was offensive. The resulting distinction, as Gentz puts it, obtained between “moderation in defense” and “fury in attack.” The French Revolution grew more violent with time; in the absence of resistance, its atrocities multiplied, and then, deprived of internal enemies, it turned its rage toward neighboring states.

Third, and perhaps most important—certainly most Burkean—was the nature of their objects. The Americans pursued concrete goals. It was, Gentz said, in the nature of a defensive revolution to seek limited ends; the American revolutionaries knew how far to go and when to stop. As such they “escaped the most dangerous of all the rocks, which in our times threaten the founders of any great revolution, the deadly passion for making political experiments with abstract theories, and untried systems.” Thus the problem with equating “liberté, egalité, fraternité”—ethereal, indefinite objects one can never have meaningfully achieved yet to which one can easily justify the sacrifice of individuals—to “life, liberty and the pursuit of happiness,” which, read contextually, refers to a tradition of deliberate and corporate self-government. “[A] revolution,” Gentz wrote, referring to the French, “which has no other principle than to attack the existing constitution, must necessarily proceed to the last extremities of imagination and of criminal guilt.”

There was, finally, the “compass of resistance,” which was relatively small in the case of the Americans, whereas the French were fighting not merely an armed opposition but “all human sentiments.” The American revolutionaries were hemmed in, Gentz wrote, by “right” on one side and “the nature of things” on the other. No such limits were imposed on—make that “accepted by”—the French. Certainly abuses occurred during the American Revolution, he notes, but they were the product of passion, whereas the French atrocities arose from cold calculation.

Jefferson saw none of this. Or, more to the point, he did: Sure, innocents were killed in France, but not so many; cost of doing business and all, and “rather than [the French Revolution] should have failed I would have seen half the earth desolated. Were there but an Adam & Eve left in every country, & left free, it would be better than as it now is.”

This is Jefferson at his poetic heights and asinine depths, shorn of any sense of prudence or proportion. Adams, by contrast, was planted on the ground. His long correspondence with Jefferson records their initial conversation on the French Revolution, when Adams saw instantly that it was headed for disaster. Lafayette “harangued” Adams, John Quincy and Jefferson about his utopian plans for the reconstruction of the French state; Adams was “astonished at the grossness of his ignorance of government and history, as I had been for years before at that of Turgot, Rochefaucault, Condorcet, and Franklin”—all, significantly, supreme rationalists.

You [were] well persuaded in your own mind that [France] would succeed in establishing a free republican government; I was as well persuaded, in mine, that a project of such a government over five and twenty millions of people, when four and twenty millions and five hundred thousands of them could neither write nor read, was as unnatural, irrational, and impracticable as it would be over the elephants, lions, tigers, panthers, wolves, and bears in the Royal Managerie at Versailles.

Jefferson would ultimately admit to Adams that “[y]our prophecies proved truer than mine,” although he would still insist they “fell short of the fact.” Prophecy, of course, was not required. Prudence was. Adams had it. In office, Jefferson could display it. Armed with a pen, it deserted him. That, on the next state visit, ought to merit a visit to Hancock Street.

President Taft on “the Danger of a Third Presidential Term.”

Leftward Drift Makes It Harder for Republicans to Confirm a “Moderate”

Dark Times, the Declaration, and the Despotic Executive

The Fourth of July and the Martial Spirit