Eternal Greve rule: never, ever talk about religion or the Bill of Rights—not on a blog, not in law school, not in FedSoc forums. There’s no law there; and on the mystery of life and the universe, I have no comparative advantage over Justice Kennedy. (He has the advantage: a black robe.) But there’s an exception to every rule, and a point where you have to push back. 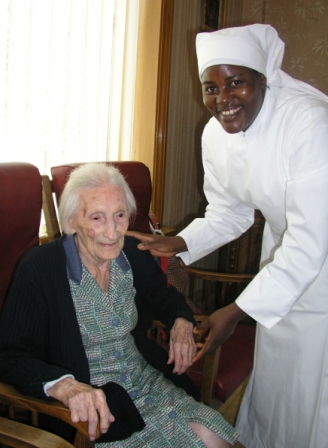 This past Sunday, a Little Sister of the Poor visited my local parish to raise money for her mission–to provide homes for the elderly to live their last years, and to die, with dignity. Mrs. Greve, whispering in the pews: “We just sent them a check. Should we give again?” Me: “You bet. Earmark it for their legal defense.”

That would be the case over the Obamacare “contraception mandate,” which requires insurers to cover such services but allows religious institutions to opt out by filing a form sheet. Not good enough, say the Little Sisters: the insurers will just shift the costs, so we’re still complicit. The Supreme Court has issued a temporary stay of the mandate.

To sign, or not to sign: why such “Foolishness over a Mandate,” as the normally sensible Ruth Marcus asks in today’s Post? It’ll all go away with a signature (DoJ says). And, Ms. Marcus notes (in reliance on Cornell law professor Michael Dorf), that can’t be so bad. Quakers had to sign conscientious objector statements back then; on the Little Sisters’ theory, didn’t that make them complicit in the crime?

Let’s say, for the sake of argument, that the legal-constitutional argument here is close. And let’s say conservatives picked this fight: the real question is why a sentient government would push so hard. Why not just tell the Little Sisters, “If you like your health insurance, you can keep it?” We’re talking about a few nuns in charge of nonagenarians. They’re not exactly striving for world domination. (Actually they are, but not in the sense of this world.)

The government does this because there’s a war on. It’s been established that religious preferences cannot count for purposes of public policy: they’re just “animus.” (Do you really need the SupCt cites?) So why tolerate or accommodate those preferences in private affairs and transactions? No reason. Between exempting conscientious objectors from national service and blocking some nuns from engaging in an ordinary market transaction: it’s all the same to Ms. Marcus and Professor Dorf. And Justice Kennedy. And the gay rights movement.

What’s been called off here is America’s Lockean compromise on religion, which rests on public neutrality and toleration, a market economy, and vibrant religion, freely exercised. What you’re looking at instead is Robespierre’s America: we have won the (sexual) revolution, and now… the Little Sisters need a public certificate of exemption precisely because they are so marginal, authentic, and sympathetic. If even they accept public requirements, then surely will you. And Madame Ruth Marcus Defarge will knit you a sweater.

This will be a game of inches for decades hence. Whether you’re a Libertarian or a believer or both, the Sisters’ inch is your first inch, too. So wish them well, and fight for it. Send them money (worst thing that can happen, it’ll help someone see the face of Christ). And if you’re a praying man or woman, pray also for the other side. Ave Maria, gratia plena. Dominus tecum. Benedicta tu e mulieribus. Holy Mother, send them to Hell.

Would a Ban on Kosher Slaughter Be Constitutional, and Valid Under RFRA?