Rick Perlstein’s reputation rests upon his award-winning first book from 2001, Before the Storm, about the crushing defeat of conservative icon Barry Goldwater in his 1964 run against President Johnson, and the conservative movement born in that defeat.

A frank left-winger who got his start at the Nation, Lingua Franca, and Mother Jones, Perlstein nevertheless was, Orwell-like, harder on his own side than on his opponent’s. Although taking swipes at Goldwater for denouncing federal intrusions into the business world when his family’s fortune was gained with government help, Perlstein depicted the Republican as much more admirable overall than President Johnson. (As an example, Goldwater ran a clean campaign whereas LBJ brought out the heavy lumber, authorizing CIA agent Howard Hunt to violate the Agency’s domestic charter and bug Goldwater’s campaign headquarters.) Perlstein saw it all and was so fair-minded, with a slight bias toward the Right, that it was hard to detect any agenda in that book.

The same cannot be said of his latest, The Invisible Bridge: The Fall of Nixon and the Rise of Reagan. 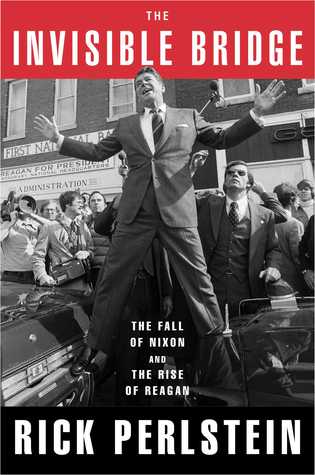 Perlstein spells out his presentist concerns in the first three pages. He is disgusted with liberals, including and especially President Obama, for praising America as the greatest country ever. Perlstein traces this rah-rah attitude back to the Nixon presidency, but it received its fullest expression, according to him, under the mindlessly optimistic Ronald Reagan. Our current President is urged to instead embrace a different kind of patriotism emerging out of the 1960s. At this point in the text, Perlstein grows somewhat coy. We can infer, though, that he would have everyone adopt the rather tortured patriotism exhibited by the countercultural types, who treated America as an unexceptional nation and zealously searched out its flaws. If more people did this, apparently, we would be united in our anger and we’d be able to transcend the political teams –the “silent majority” versus the liberal elitist minority—that characterize today’s stalemated politics.

Perlstein seeks to show how Nixon and Reagan landed us in that stalemate. Nixon, for political gain only, articulated the frustrations of “the silent majority” as against the limousine liberals and the New Left. This construct gave him an even larger victory over George McGovern in 1972 than Johnson’s victory over Goldwater eight years before. The President, guided by Patrick Buchanan, played political theater by appearing among protesters who could be counted on to throw fruit and chant. Amid the catcalls and waving placards, he would then talk of a better America than what the youth represented, and his poll numbers rose. But according to Perlstein, Nixon’s warped and unshaven personality couldn’t make these patriotic speeches sing.

Enter Ronald Reagan, whom Perlstein denounces as being authentically optimistic about everything. Like many on the Left, Perlstein tries to explain away Reagan’s popularity as an amiable talent for making Americans feel good. Had he not had this folksy appeal, Perlstein asserts, voters would have recognized his foreign policy views as frightening and his economic views as retrograde in their return to the laissez-faire concepts of the 1920s.

But this slights the popularity of Reagan’s views. It is true that Americans were depressed about our troops’ withdrawal from Vietnam and about the lackluster economy, and needed cheering up. This, however, did not dent their anticommunism. Indeed, it would be Gerald Ford’s gaffe during the 1976 presidential debate, in which he deemed the communist satellite Poland an independent country (a mistake Jimmy Carter exploited), that many pundits believed cost President Ford the election.

Moreover, there was palpable anger at the welfare state. With even some liberals believing the Great Society had gone too far (among them Senator Ted Kennedy), economic policies of the kind Reagan espoused were sure to find an audience.

For a book dealing with the 1970s, it is amazing how little the Soviet Union is mentioned. To acknowledge the importance of the other superpower would risk showing that the Soviets were indeed, as Reagan warned, violating the Salt II agreements and rapidly outpacing the United States in an arms buildup. President Carter’s National Security Advisor, Zbigniew Brzezinski, no friend of Reagan’s, said pretty much the same thing.

It is true that Reagan seldom if ever wavered in his views, but Perlstein doesn’t include all of them. To do so would reveal that at least one of them—Reagan’s belief that Soviet society would implode if Washington engaged Moscow in a costly arms race—would be validated by 1989.

Ideologically, Nixon and Reagan don’t match up. Perlstein acknowledges as much, but it’s a throw-away line; he fails to do justice to this interesting difference. Nixon was what Camelot partisans thought John Kennedy was: He supported gun control (even for handguns), was pro-choice, and, as President, instituted wage and price controls. He famously said that “only conservatives can do what liberals dream of.” Reagan, in contrast, supported the Second Amendment, was anti-abortion, and believed in cutting taxes. Some of which assimilates him to—well, in fact to John Kennedy, that optimistic President who was also anticommunist and a tax-cutter.

When examining the Nixon presidency, Perlstein cannot maintain the calm even-handedness that made Before the Storm such a great book. In truth, this might have been too much to expect, for how could he or really anyone not recoil from the pay-offs, the forgeries, the break-ins, the use of the CIA to muzzle the FBI, the anti-Semitism, and the self-pity? Perlstein acknowledges that there were dissident conservatives who broke ranks and condemned Nixon: William F. Buckley famously said that Nixon’s enemies list was the work of a “fascist,” while George Will was so critical of Watergate that many National Review readers cancelled their subscriptions.

Ah, but from Ronald Reagan, Governor of California at the time, no criticism was heard. He was mindlessly and inexplicably loyal to the much more liberal Nixon. It is here that Perlstein is on firmer ground about some of Reagan’s unthinking responses. It was only much later, after Nixon’s resignation (which Reagan spun into Nixon being honorable), that he became mildly critical, something his aides wanted him to go further on.

Perlstein is so enmeshed in his coping mechanism for Reagan’s popularity—that the Governor was superficial but lucky about the temper of the country when his presidential prospects ripened—that he misses an ironic point. For we might wonder how, so close in time to the Vietnam withdrawal, to Watergate, and to the subsequent Democratic sweep of the Congress, a Republican who supported the Vietnam War, and was more conservative than Nixon, came within an inch of wresting the 1976 Republican nomination away from President Ford.

No doubt patriotism did play a part in Reagan’s near miss, as did the perception that the Soviets were winning the Cold War. But the libertarian factor should be noted as well. Voters were fed up with big government abuses of the Constitution. They were also fed up with Washington politicians. (Unused as an insult since the 1920s, the word “politician” at that point resumed its place as a nasty epithet.) More than anyone else at the time, Reagan came across as a non-politician, a folksy type with whom voters could see themselves having a beer. Even his supposedly inappropriate resume as an actor helped him. Unlike Nixon, he had not followed the path of the professional politico, spending decades building up chits and “you owe me’s.” Reagan’s handlers recognized this, and “allowed Reagan to be Reagan.” But “Reagan being Reagan” also frustrated them, especially when he did not act like an ideologue—he could have condemned the anti-libertarian behavior of Nixon but desisted, believing Nixon to be his friend. (This was quite mistaken, for Nixon despised him.)

Certainly there is some portion of Reagan’s political success that owes to his sunny view of America. But this barely begins to tell the story. By refusing to take in the big picture, Rick Perlstein does what he criticized the liberals for doing in Before the Storm. He wills himself not to see what is there in front of his nose.

A new book grapples thoughtfully with Reagan's legacy but misunderstands a central point about his stance on nuclear weapons.

Richard Russell and the Importance of Remembering the Past

Today the past is more often treated as a cautionary tale instead of a guide, and in a republic, this is a dangerous mistake.

The Death of TTP and the Path to Putin