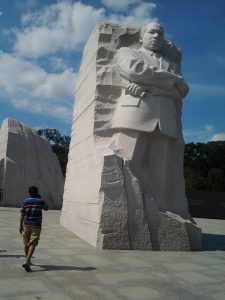 Tocqueville claimed that Americans build grandiose public monuments to compensate for the ordinariness and, to speak bluntly, the insignificance of individual democratic lives (Democracy in America,Vol. II, part 1, c. 12). The architectural results are sometimes preposterous. Nevertheless, he compares Americans with Romans. Presumably their “greatness, enlightenment, and real prosperity” will make these democrats grow into the role. The now “pompous name of Capitol” would soon seem appropriate.

But we have become vulgar Imperial Romans in our public architecture. Not content with the glorious Washington, Jefferson, and Lincoln monuments, we have added others, which show how empty our souls have become—worse than the Americans Tocqueville often belittled yet respected even more. Civic art should create reverence for the principles of the republic and the heroic qualities of their leaders. Ronald Reagan, directing his first inauguration to the west, noted the democratic qualities of the men honored before him.

The latest additions to the Mall serve quite contrary purposes, rooted in private agendas and passions. Despite cosmetic accessorizing, the Vietnam Memorial is a ghastly gash, its buried black legs pointing to Washington and Lincoln, howling from the earth of lost lives and proclaiming a dark vision of America. The Franklin Roosevelt theme park avoids his revolutionary meaning and invites children’s romps.

The World War II memorial is an incoherent throwback; the Korean a set of toy soldiers. The proposed Eisenhower remembrance seems a tribute to designer Frank Gehry’s ego and not to the General and President. The National Civic Art Society is waging an intrepid battle for a monument that makes better sense of his life, connecting military virtue with civic virtue. The dignity the war memorials do have comes from the living witnesses who honor the dead and receive the spark of heroism.

All this leads up to the Martin Luther King memorial, which will once again become a focus of attention as the nation celebrates the fiftieth anniversary of the August 28,1963 March on Washington. The fuss over the lame misquotation on the statue (“I was a drum major for justice…”) is nothing compared with the greater disgrace of the mediocrity of the statue. The civil rights revolution transformed America; the stubborn King just stands there, arms folded, glowering across the Tidal Basin, with Jefferson off to his left. Its size (at 30 feet, half again the height of Jefferson) undermines the real King’s message of equality. This monstrosity from China is art in the fascistic mode (cf. Mt. Rushmore). 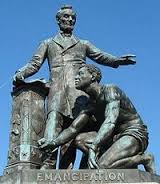 I would rather be a political science major for justice and honor another controversial statue, the Emancipation (or Freedman’s) Memorial in Lincoln Park, in northeast Washington, D.C. Frederick Douglass gave his extraordinary eulogy for Abraham Lincoln there, at its unveiling in 1876. Neither Douglass nor professor Diana Schaub approves—see her remarks as well as those of others on this instructive panel on civic art—but  I counter with Harry V. Jaffa, who contends that this creation rivals Daniel French’s Lincoln. Far from “patronizing and paternalistic,” as one journalist put it, the statue, conceived by a former slave woman and paid for solely by the contributions of freedmen, portrays the mixture of statesmanship, law, and character necessary for self-government.

In a Promethean gesture, Lincoln bids the freed slave to rise. Lincoln’s other hand rests on fasces bearing the image of George Washington. The slave is not bowing to Lincoln or any other man. Broken shackle on his right hand, he is rising, as a runner on a track; he is muscular, someone ready for the struggles of freedom ahead. Such a man should never have been a slave. Appropriately, the last person captured under the Fugitive Slave Act was the model for the emancipated slave.

War by Fiat: A Response to Stephen Knott

What Are They Thinking?

Liberalism entered a decidedly different phase, where formal equality & equality of opportunity were to be replaced by real equality & measureable results.

Welcome to the Party, Pal

There is clearly a market for what has come to be called “Trumpism,” but there are no stable institutions pushing for it.