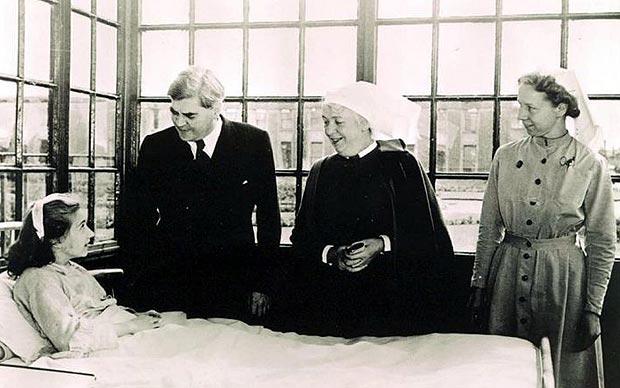 The philosopher Mary Midgley tells us that myth is not just an obstacle to thought, or even merely an adjunct to thought, but an essential part of human ratiocination itself. Whether this is actually so or not in the philosophical sense, namely that human thought is completely impossible without the making and use of myth, I do not know; but what is certainly the case is that mythology is a powerful force in human affairs, not least in politics. And myth can do harm as well as good.

In Britain, the most powerful political mythology (perhaps for lack of any other) attaches to the National Health Service (NHS). This way of organising our health care was born with original virtue in 1948, since its conception, in more senses than one, it has become more and more immaculate. If the service had a slogan, it would be Noli me tangere. No British politician would dare admit that its institution was anything other than an unmixed blessing; no British politician, at any rate none who aspired to office, would dare do anything other than tinker with it at most. Against the mythology, Mrs Thatcher herself was as helpless as a day-old kitten.

In part, the attachment to the service rests upon an historical myth, namely that before the NHS, the poor had no health care available to them, or none that was worthwhile. For the first time, then, they had access to healthcare of the highest quality available at the time. No longer would healthcare be available only on the basis of ability to pay, but henceforth on the basis of need. To each his treatment according to his illness, from each taxation according to his income.

It would not be difficult, of course, to find horror stories of terrible treatment, both in its medical and social aspects, from before the start of the health service. Indeed, such stories are trotted out regularly and are not in themselves false. People who recall terrible treatment are not liars or confabulators, though in legal circumstances they may tend to exaggerate for obvious reasons.

The problem is, of course, that terrible stories can be told about treatment in any system whatsoever. For example, if future historians want to denigrate the NHS they will have a cornucopia of horror stories to choose from, all of them true and well-attested, and this might give future readers a misleading impression about just how bad it was. So long as the world remains imperfect, we need numerators as well as denominators in making comparative judgments. To have the latter only is like trying to play Hamlet without the Prince.

In the circumstances, we can only resort to statistics; and, rough as they are, they do not support a providential role for the NHS. For example, the rate of decline of the infant mortality rate and the rate of increase in the life expectancy of the population did not accelerate after the arrival of the new system but remained pretty much what it had been before.

Now of course this neither vindicates nor damns the NHS, because we cannot be sure what would have happened without it. It seems to me most likely that the NHS had little effect one way or the other, but it is possible that without it mortality would not have declined so much, or would have declined more. Certainly by comparison with our nearest neighbour, France, the NHS had not done well: in 1948 life expectancy in France was 6 years fewer than in Britain and it is now 2 years more. The same is true of Italy and Britain. But life expectancy is determined by much more than by systems of health care, so that all one can say is that the performance of the NHS is not outstanding.

More surprising, perhaps, is that the difference in the health between the richest and poorest deciles of the population has increased since the establishment of the NHS. Before the NHS was instituted, the variation in the death rates of the richest and poorest deciles had remained constant for at least forty years; it began to increase almost at once. In particular, it accelerated markedly during the period when expenditure on the health service went up enormously from 1997 to 2006 (the additional spending accounting for a third of our national debt, incidentally).

Again, one cannot positively say that the difference in healthcare outcomes for the rich and the poor increased because of the NHS: we don’t and can’t know what would have happened without it. But at the very least one can say that it did not, and does not, have the expected and vaunted egalitarian effect that was its justification in the first place. Again, it is easy to show that equality as such cannot be a desirable thing, because a perfectly dreadful health care system could be egalitarian: but I am here taking equality as desirable for the sake of argument. And on that argument, the NHS has not succeeded, even if its lack of achievement is not its fault.

Again, international survival rates after such conditions as cancer and myocardial infarction do not favour the NHS. No doubt such comparisons are fraught with difficulty, but at the very least one can say that on most measures the NHS comes near the bottom of the European league. Death rates after heart attack in Sweden, for example, are about half of those in the NHS.

Moreover, there are regular scandals involving the NHS, some of them large scale. I read some of the report of the inquiry into the Staffordshire Royal Infirmary, where hundreds of patients are thought to have died of poor treatment. Some of the nursing sounded distinctly pre-Florence Nightingale, and firmly of the Sairey Gamp school. It would not be true to say that this is universal, but you don’t have to go far in Britain to meet people with horror stories of the NHS to tell. I should add two things: first that I have no complaints myself of the NHS, or only very trifling ones, and second that I have heard horror stories from around the world, including the United States.

My point is not that the NHS is uniquely awful, though I have never met a European resident in Britain who would not rather avoid it if he were ill. It is rather that the British population is unreasonably and irrationally attached to it, as though it were a pearl above price, the greatest of all British accomplishments, far better than anything that anyone else has. The British believe in the NHS with religious intensity, but not in the reality of it: rather they believe in the myth of it, a myth that is the consequence of intense and continuous propaganda. And in so far as Britain is not a totalitarian country the myth is all the more tenacious, for in totalitarian countries mythologists are obvious and transparent liars, whereas in free countries they are not.

Failing Our Students in a Crisis

Technological progress will not maximize learning if our educational institutions are mired in an ideology that prevents full use of the tools.

Nobody stopped to think these films were not just comedy, but also stories about a coming class conflict in America.