A 20th century wag topped off a famous line from Kipling this way: “If you can keep your head when all about you are losing theirs . . . maybe you just don’t understand the gravity of the situation.”

Five years after the “recovery,” the economy continues to chug along with a puny two percent growth, actually minus in the first quarter. For 2013, growth was a lackluster 1.9 percent. Labor-force participation is at the lowest in years. Youth and minority unemployment nears Depression levels. Traditional marriage is crumbling, with low income families bearing the economic burden. Obamacare threatens the world’s best medical system. Unfunded entitlement promises reaching $40 trillion threaten solvency. The government cannot even care for its veterans.

The Center for Disease Control is found to have mishandled deadly pathogens for a decade, inappropriately sending them to unsuspecting subjects. The Food and Drug Administration had vitals of incurable smallpox improperly stored since 1954. The Washington Navy Yard security system was easily penetrated by a former contract employee who killed 12 and 160 cameras of internal traffic were not used to find him. After discouraging Obamacare enrollment statistics, the Department of Health and Human Services announced it would no longer report any numbers. NATO and the United States delayed 15 years and $100 million to develop common ammunition for their armies due to environmental concerns. A year into a congressional investigation, the Internal Revenue Service says emails concerning its targeting of conservative activist groups were lost.

This is a picture of a federal government out of control—an institution trying to solve every problem and right every wrong but with little idea of how, other than “doing something” to get through the next media cycle. It is a nation with 300,000 regulations but no understandable law. Even pro-government public administration expert Paul Light concludes that an overly bureaucratized national government can “no longer faithfully execute its laws.” The whole welfare state New Deal/Great Society program to centralize power in Washington, to manage the economy, to regulate everything from securities to energy, to force social policies and democratize the world, has ended tangled in red tape. It is overwhelmed. 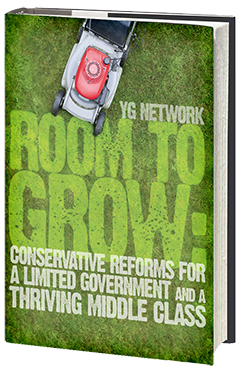 Enter “reform conservatism,” which promises a new way. Noting that the Left and the Right are out of ideas, a group of young writers and analysts have come out with Room to Grow: Conservative Reforms for a Limited Government and a Thriving Middle Class. The authors of this manifesto agree that the welfare state is trying to do too much and search for ways to curb government and revivify intermediate institutions like the family and civic associations.

The principles set forth in the book’s introduction by the very impressive Yuval Levin are flawless. The conclusion by Ramesh Ponnuru even concedes that much of government “becomes a series of shakedowns, special-interest deals, and programs that continue from inertia” and does not work. But, Ponnuru cautiously adds, if a reformer sees laws and programs that do not fit with our constitutional commands and ideals, he will not vainly demand that they all be abolished straightaway. Instead, he will move patiently and intelligently to bring government closer to its proper bounds.

Things may be bad, but change must be “practical” and “incremental” and not based on radical reform of the constitutional “institutional arrangement.”

In between introduction and conclusion, Room to Grow parades a dozen incremental solutions to address numerous social and policy ills now debilitating the bloated federal government. The family is supported but mostly by granting it more funds and by programs promoting “healthy choices.” The Feds would create the educational environment for local schools to succeed. Job growth would have Washington “use the market” for “positive ends.” Welfare reform would discourage early childbearing and grant vouchers to responsible parents “subject to rigorous evaluation.”

It does not seem the Feds would do fewer things under this program, but only different, more conservative things—which is fine, but just another litany of things national experts would do to determine our welfare for us. Few of the proposals seem actually to empower civic institutions. Moreover, they would be bound to end up even more watered down after the legislative discussion and debate urged by these well-meaning and earnest reformers.

A similar movement in Britain has inspired editors of the Economist, John Micklethwait and Adrian Wooldridge, to declare the need for The Fourth Revolution in human history to replace an exhausted welfare state. Their book, which is subtitled The Global Race to Reinvent the State, offers a very English view of history: Thomas Hobbes’ revolution produced the nation state that was the first step toward modern law and order. John Stuart Mill added freedom to the social mix and, finally, Beatrice Webb topped if off with the welfare state.

Praising Leviathan’s creator, highlighting a Mill who, the authors admit, later seriously strayed into socialism, and identifying the late-arriving Webb with the welfare state, while marginalizing John Locke on liberty, will surprise readers on this side of the pond—but the authors are British “Liberals” after all. At least they evince a sense of urgency. They get it right that the welfare state is exhausted and in need of radical reform, and that more freedom is the solution. Their specifics, on the other hand, turn out not to be very radical or especially libertarian. (One reform they suggest for the United States is to limit its separation of powers.)

Micklethwait and Wooldridge are not inhibited from offering institutional fixes. They push major privatization of government to take advantage of market-sector technology and entrepreneurship. They propose substantial flexibility for the civil service and more contracting out to private firms. They attempt to save democracy by limiting campaign spending. They concede the difficulty of these reforms, noting that the United States has tried them with little success in changing the fundamentals. But they do recognize in theory that governmental reform must be comprehensive and swift, which is essential in a democracy with a limited time horizon. They argue that what has worked best in several nations is simply to cut spending and let local governments and lower-level bureaucrats figure how to make it work.

It is increasingly clear the welfare state is failing. The surprise is that a crisis requiring a “revolution” would be met with the (barely even) half-measures suggested in these books. How could blunting the edge of the status quo cumulate in something fundamentally different? Wouldn’t this just add another dimension of confusion to the welfare state? Patience and prudence may simply produce the 76th on top of the existing 75 jobs programs, or a 106th program to educate the young, or the 71st to feed hungry children. Real policy reform—good or bad—comes from dramatic and swift changes in social and political power by leaders like Andrew Jackson, Abraham Lincoln, Woodrow Wilson, Franklin Roosevelt, and Ronald Reagan. In a democracy, the opening for change dissipates quickly, within the first year or so after a defining election. Incrementalism only means the welfare state will continue its decline into utter immobility.

Certainly, the necessary changes are not possible today under President Obama. But neither are the Room to Grow or Fourth Revolution proposals. What can be achieved is for reformers to create a truly radical plan if they ever get the electoral opportunity to act. Micklethwait and Wooldridge are closer to the fundamental changes required but they bury them in their penultimate chapter. As they correctly suggest, the real historical successes were cases in which decisions were sent to the market or to local government and people were allowed to figure things out for themselves. Direction is changed by the single stroke, not by bureaucratic policy nuance. Privatization and decentralization of governmental power are the only recipe for a genuine overhaul of the overly centralized welfare state.

If overload is the problem weighing down the welfare state, it follows that reducing the range of responsibilities and sending them elsewhere, not devising new policies for the existing bureaucracy to carry out, is the solution. For the wary, this is not institutional manipulation but restoration of the Constitution to its policy wisdom in Article I, Section 8 and the Tenth Amendment.

Is Griswold v. Connecticut Consistent with the Original Meaning?