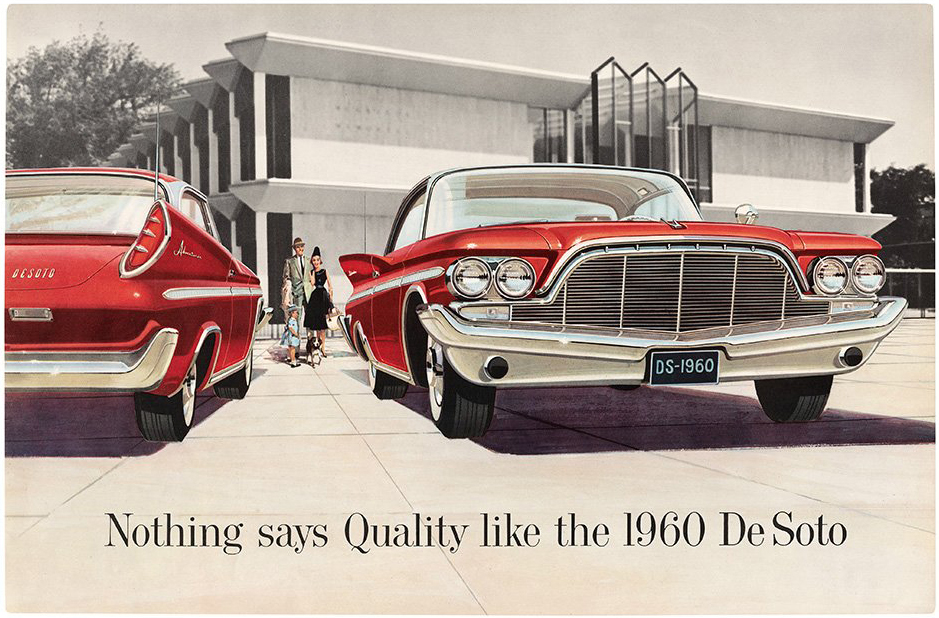 Every year in early May, tens of thousands of people gather in Ocean City, Maryland, for Cruisin’ Ocean City, a weekend dedicated to vintage cars. For four days, Coastal Highway is jammed with classic Camaros, souped-up Corvettes, 1940s Fords, and thousands of other bold, gleaming cars. The cheering, drinking, peel-outs, and general revelry have gotten so ecstatic and voluble that there’s talk of moving the event to earlier in the year, when fewer partiers would be able to attend.

Looking through Automobile Design Graphics: A Visual History from the Golden Age to the Gas Crisis, a recent coffeetable volume published by Taschen, it becomes evident why Americans, and particularly American men, love vintage cars. On the one hand we have the nostalgia factor, a yearning for a time when U.S. manufacturing turned out quality goods at a good price, gas was cheap, and political correctness and environmental hysteria had not quashed the fun of going cruising in a sporty car.

In a larger sense, these cars resemble a kind of timeless artistry—bold archetypes that transcend a particular place and point to the power of beauty. We just don’t make things like this anymore, but we yearn for their grace and power. That’s why thousands flock to Ocean City every year.

Before television and the Internet, car companies used brochures to try and sell their products. In Automobile Design Graphics, editor Jim Heimann, along with car historian Steven Heller and design historian Jim Donnelly, present the visual history of over 500 reproductions spanning eight decades of customer brochures, from Henry Ford’s Model T to the Pontiac of the early 1970s. As is usually the case with Taschen books, this one is a sumptuous offering with striking graphics. The reader travels through several eras of commercial art: the ornate turn-of-the-century Nouveau; the German Sachplakat poster style of the early 1900s; from New Deal realism to Art Deco of the 1950s, to the rocket lines of the space age.

“For all the automobile’s increasing complexity and performance,” design historian Donnelly observes, “the giant factories in Detroit and elsewhere relied on simple marketing: the illustrated sale brochure that awaited buyers who strolled into a showroom. The strategy: Reach buyers and keep them thinking—constantly—about how the car could change them. Rarely have human ambitions—needs, so deep and personal—been massaged so effectively, for so long, through such a rudimentary medium.”

Auto historian Steve Heller pinpoints the appeal of the brochures:

What’s interesting about the marketing of the American car is that often the ads delivered exactly what was promised. Going out and purchasing televisions, or toys, or medical elixirs, or laundry detergent could disappoint when the claims being made for these products were shown to be hollow. Buying the latest GE dishwasher, hula hoop, or wrinkle-free shirt did not change a person’s life as promised—whereas a car like the Nash Statesman, the Lincoln Zephyr, or the Chrysler Royal really could touch something deep inside of people.

As Automobile Design Graphics notes, upon their creation in the early 20th century, cars were a way to literally escape from the confines of the home and the city. They meant freedom. Cars were a delight to those who survived urban tenements and the trenches of World War I, as well as the GIs who returned home after World War II. Cars meant getting to be alone with a girl on a date or, if you were Hunter S. Thompson in Fear and Loathing in Las Vegas, a wide open desert highway that led to “the dark heart the American dream.”

One unfortunate premise of Automobile Design Graphics seems to be that Detroit, once the Mecca of car manufacturing, created an empty and meaningless desire that had no real lasting value. Chapter titles such as “Creating Desire,” “Igniting the Desire” and “Exaggerated Virtue” imply that the public was being manipulated into thinking that a car would enrich their soul. In fact the desire for freedom predated the car itself and was always there. In many cases, cars did indeed bring a kind of spiritual joy, from the elegant Essex of the 1920s to Jack Kerouac’s search for God on the road in the 1950s, from the cool Ford Mustang of the 1960s right up to the 1999 Volkswagen “Pink Moon” ad for the Cabriolet model.

The latter features four young people driving through a moonlit night in a convertible. The spot is charged with beauty, depicting people “traversing into a psychic space,” to echo the phrase design historian Jim Donnelly offers to describe the sales pitch of the classic car brochures. It’s no surprise that “Pink Moon”—with its lush music by the late English folk singer Nick Drake, and connection to nocturnal mysticism, a connection made possible by driving a convertible—instantly became famous and went viral.

Furthermore, the art in many of these brochures, far from being Donnelly’s “paper Cinderellas” that would lose their shine once the next year’s model rolled in, has a timeless quality, featuring bright colors and clean, modernist lines. The very existence of this book belies much of the editor’s commentary. People were right to want beautiful cars, and are right to celebrate them, whether in a song by the Beach Boys, in a Fast and Furious movie, or on a NASCAR racetrack.

Automobile Graphic Design ends at the beginning of the 1970s, when everything changed. That was when consumers of Middle Eastern oil experienced the oil embargo, and when President Carter, in a famously dour speech, scolded Americans for wanting things. We were made to feel guilty about driving a gas-guzzling Cadillac. And by then, car brochures were obsolete, supplanted by automobile ads on television.

What else had changed? Easy and affordable air travel had rendered the beatnik marathon road trip a thing of the past. Feminism objected to using women as beautiful props for car ads. In advertising copy, words like “sleek,” “modern,” and “cosmopolitan” were replaced by promises of safety, efficiency, and miles per gallon. The fun was over.