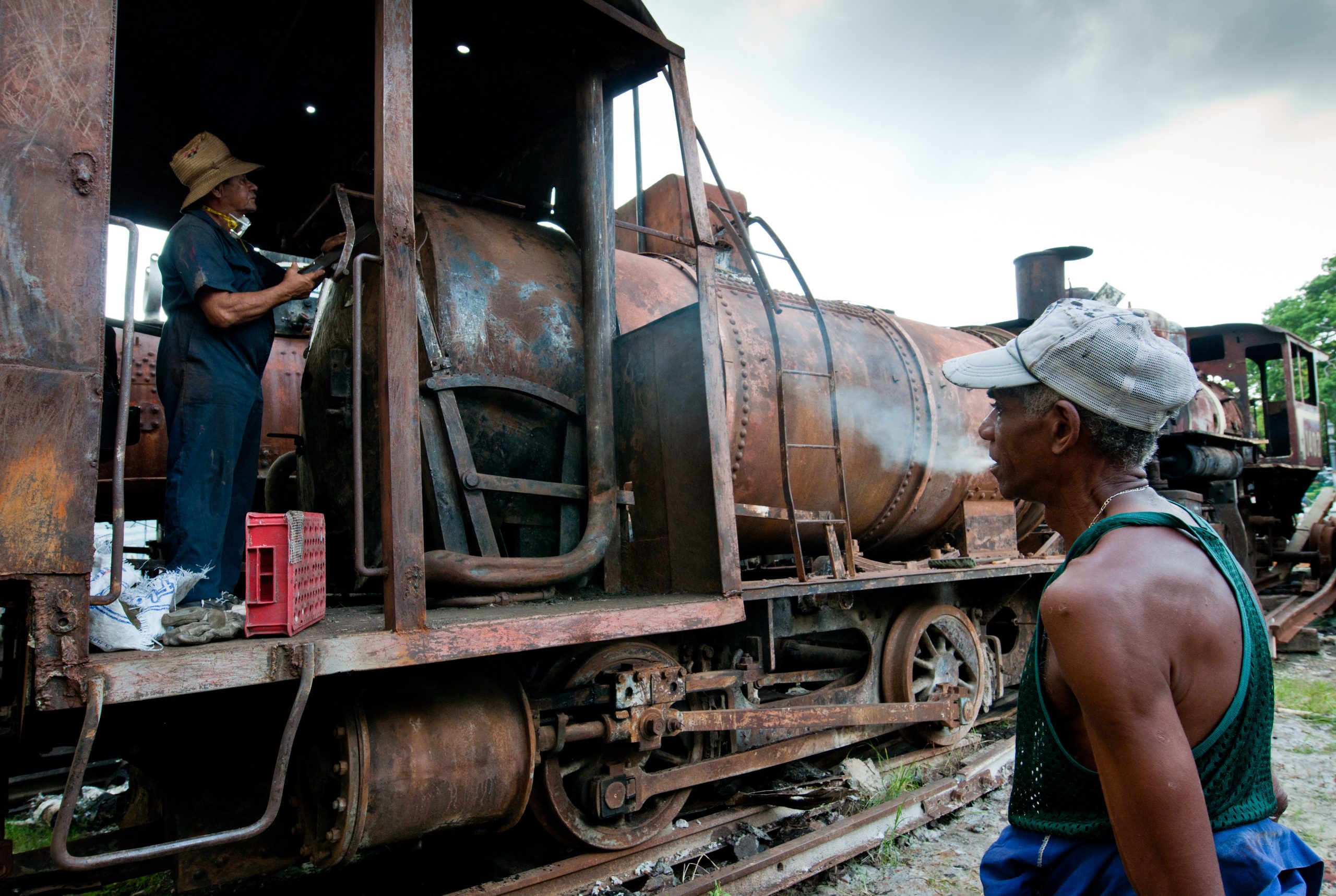 Self-employed Cubans repair on October 24, 2011, an old steam locomotive used from the end of the 19th century in sugar cane production. (STR/AFP/Getty Images)

Some conservative and libertarian commentators have joined the leftist chorus in blessing President Obama’s moves to “normalize” relations with Castro’s Cuban regime on the basis of hopes that “Trade will lead to freedom.” Unintentionally, Peggy Noonan showed how ill-founded such hopes are: “it wouldn’t be long, with lifted embargoes, before captains of the Cuban army found out what managers of the new Hilton were making and jumped into hotel services” (WSJ December 17 and 20, respectively.) In fact, Cuban regime elites know and control precisely who earns what in the hotels. They alone profit from the nearly $3 billion dollars tourist industry, and from foreign trade in general. Since Obama’s initiatives will channel U.S. money exclusively through Castro regime channels, they can only increase the incentives that Cubans already have to seek their fortunes – most immediately, what they eat – through the clutches of communist tyranny.

As we just celebrated Christmas and the New Year indulging in delicacies of our choice, it is especially difficult for us to realize what it is like to live on the edge of malnutrition, scrambling for the next meal. It behooves us to keep in mind that the Cuban people are hungry (According to the U.S. National Institutes of health, 41% of hospital patients are suffering for malnutrition), hence access to food is most Cubans’ immediate preoccupation, and that hunger, along with the regime’s grip on jobs and wages, and its arbitrary enforcement of the draconian penalties surrounding food, are the keys to the prison that is Cuba.

Congress, realizing that Obama’s “normalization” will only sustain this hunger game, should legislate to make sure that whatever economic relations Americans have with Cubans will benefit individuals, bypassing the regime.

The facts of nutrition in Cuba are straightforward. The entire population receives a ration book, whose coupons can be redeemed at state food stores (assuming that the food is actually available, which is not always the case) for food at subsidized prices. This includes (per person per month) six pounds of rice, a pound and a half of beans, fifteen pounds of potatoes or bananas, a pint of cooking oil, six pounds of sugar, and a half-pound of beef (or a pound of chicken). This supplies about a third of nutritional needs at a price that comes to about 20% of the average monthly salary. How does one supply the greater part of one’s needs from markets where prices are higher than in the U.S. (According to the Washington Post, “a big papaya costs more than a day’s wages”) with the roughly $15 that remains of one’s income, is an all-consuming problem for most people.

Growing one’s own food, earning the extra income, making the complex arrangements and compromises necessary to stay alive, is dangerous as well as difficult because the regime has surrounded the food system with regulations falling afoul of which can land you in a labor camp. That is because feeding yourself independently of the Party makes you independent of the Party. A group of people who cooperate with one another to feed themselves is a nucleus of subversives, de facto. For example, slaughtering a cow is punishable by eight years. Even buying beef under the table can land you in the slammer for three years. In Cuba, it is illegal to cast a hook into the surrounding sea. Millions violate the rules, of course, but must somehow evade or buy off the enforcers.

There are private markets in Cuba, in which lots of food is available, either requisitioned from farmers, or donated by international aid agencies, or imported. Nowadays, Cuba has to import even sugar. But these “dollar stores” do not accept the Cuban Peso. They take only the “Convertible Peso,” which the government allows only to certain people in certain jobs. Folks paid in ordinary Pesos pay a premium to convert. (People who receive money from relatives in the U.S. are another category.) And of course, the government reserves this alternate economy for its supporters. It has promised to unify the currency systems.

But since opening jobs and money to whomever can deliver goods and services would destroy the regime’s main lever of non-violent control, granting economic freedom would leave the regime’s repressive apparatus naked and brittle. They have reason to fear ending up hanging from lamp-posts.

This, then, is the Cuba in which a professor of chemistry at the national university prostitutes herself at a tourist hotel so that her family may eat, from which countless persons cast themselves onto the sea in rickety crafts hoping that the Gulf Stream and favorable winds will carry them to our country.

That is why “normalization” with this Cuba can have only one of two meanings. The subculture of the Democratic Party’s left wing, in which Obama was raised, has always celebrated Cuba as a Progressive model much of which is to be imitated. The Clinton administration broke down doors and broke hearts to deliver poor Elian Gonzales to Cuba after his mother had died to give him freedom in America. Even its food system has its fans among us. Bill McKibben celebrated it in Harpers Magazine “The Cuban Diet: What you will be eating when the revolution comes.” Obama and the Left, meaning as they do to get along with and support the Castro regime, will place no conditions on U.S. persons who deal with the island. Consequently, these will follow the regime’s directions and take its side in its hunger game.

But were the Congress more perceptive and conscientious than the Wall Street Journal’s conservatives, it would require persons who travel to or do business in Cuba to take a leaf out of a previous American experience with a despised system, South Africa’s Apartheid. During the 1980s, U.S. businesses followed a list of procedures known as “the Sullivan Principles,” under which Americans dealt with South Africans of all races without discrimination by race, regardless of the government’s laws. In short, if the government wanted Americans to come and spend, it had to accept that Americans would behave in a manner that was subversive to its system.

U.S. law should face the Cuban regime with this hard alternative: If you want American investment and tourism, you must accept that our money will be on the people’s side of the hunger game – not on yours.

An Originalist Reading of the Law of Nations

How should we think about the relationship between the US Constitution and the law of nations?

Is Trump or Sanders Worse for Liberty?

The Wackiness of Evil