Rexford Tugwell, sometimes known as “Rex the Red” for his admiration of the 1930s Soviet Union and his fervent belief in central planning, was made Governor of Puerto Rico by President Franklin Roosevelt in 1941.  Among the results of his theories was the Government Development Bank of Puerto Rico, a bank designed as “an arm of the state,” which is a central element in the complicated inner workings of the Puerto Rican government’s massive insolvency.

The bank has just defaulted on $367 million of bonds, the first, but unless there is Congressional action, not the last, massive default by the Puerto Rican government and its agencies on their debt.  The Government Development Bank was judged insolvent in an examination last year, but the finding was kept secret.  The governor of Puerto Rico has declared a “moratorium” on the bank’s debt, which means a default.  A broke New York City in 1975 also defaulted and called it a “moratorium.”

Adding together the Puerto Rican government’s explicit debt of about $71 billion and its unfunded pension liabilities of about $44 billion, amounts to $115 billion.  This is six times the $18 billion in bonds and pension debt of the City of Detroit, which holds the high honor of being the largest municipal bankruptcy ever.

Puerto Rico’s government-centric political economy goes back to Rex the Red, but its budget problems are also of long standing.  In this century, the government has run a deficit every year, borrowed to pay current expenses, and then borrowed more to service previous debt until the lenders belatedly ceased lending and the music stopped.  Its debt and its real GDP definitively parted company in 2001 and have grown continuously further apart, as shown Graph 1.

As its debt skyrocketed, the credit ratings of its bonds fell and then crashed.  See Graph 2. 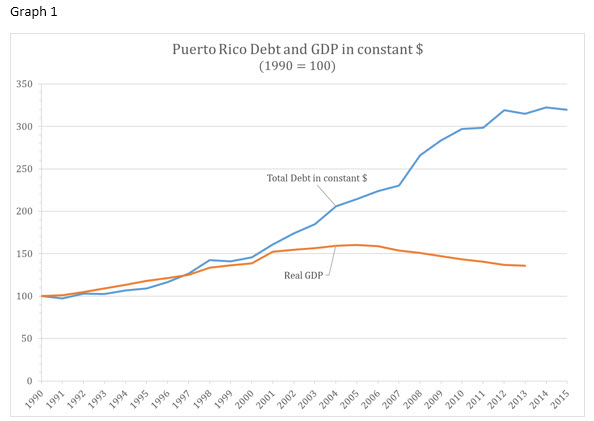 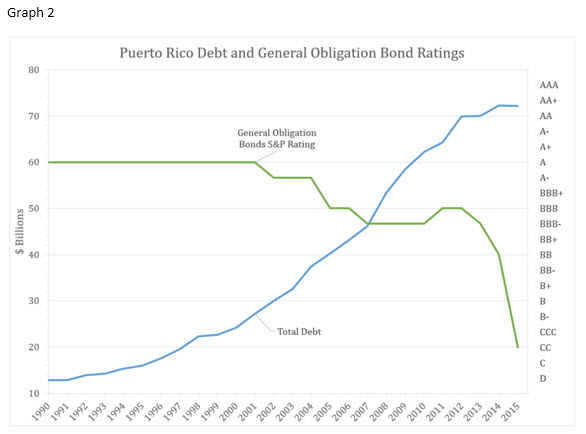 Where do we go from here?  Addressing the deep, complicated, and contentious problems requires three steps:

1. The creation of an emergency financial control board to assume oversight and control of the financial operations of the government of Puerto Rico, which has displayed incompetence in fiscal management (or mismanagement) is a central aspect of the solution. This control board can be modeled on those successfully employed to address the insolvencies and financial mismanagement in Washington, DC in the 1990s, in New York City in the 1970s, and in numerous other places.  More recently, the City of Detroit got an Emergency Manager along the same lines.

Such a board would be and must be quite powerful.  The sine qua non for financial reform is to establish independent, credible authority over all books and records; to determine the true extent of the insolvency of the many indebted government entities—in particular to get on top of the real condition of the Government Development Bank; and to develop fiscal, accounting, control and structural reforms which will lead to future balanced budgets and control of the level of debt.

Does all this take power and responsibility away from the Puerto Rican government?  Of course it does, it needs to, and it can be done.  Under the Constitution, Congress has complete jurisdiction over territories like Puerto Rico.  Just as in Washington D.C. and New York City, when the problems are straightened out, financial management will revert to the normal local government.

2.  Pollock’s Law of Finance states that “Loans which cannot be repaid, will not be repaid.” Naturally, this law applies to the $115 billion owed by the Puerto Rican government, which is on its way to some form of restructuring and reorganization of debts.  It seems clear that this should be done in a controlled, orderly and equitable process, which takes into account the various levels of seniority and standing among the many different classes of creditors.

Three objections have been made to this approach.  One, with heavy advertising, claims that it is a “bailout.”  Since no taxpayer money is planned to go to creditors, this is simply wrong and ridiculous.  Bondholders taking losses is the opposite of a bailout.

A second is that bondholders may be disadvantaged versus pension claims, and this may affect the whole municipal bond market.  Indeed, in the Detroit bankruptcy, the general obligation bonds got 74 cents on the dollar, while the general city employee pensions got 82 cents— an important haircut, but a smaller one.  The political force of pension claims in insolvencies is a credit fact that all investors must take into account.  If the national municipal bond market internalizes and prices the risks of unfunded pensions, thereby bringing more discipline on the borrowers, that seems like progress to me.

A third objection is that the bill’s approach would set a precedent for financially struggling states like Illinois, which they might follow.  In my judgment, there is zero probability that Illinois or any other state would volunteer to have a financial control board imposed on it.  Even leaving aside the fact that Puerto Rico is not a state, this argument is vacuous.

3.  Of fundamental importance is that in the medium term, Puerto Rico must develop a sustainable economy—that is, a market economy to replace its historical government-centric one. Various ideas have been proposed relevant to this essential goal, and much more work is required.  This is the most challenging of all the elements of the problem.  Steps 1 and 2 must be done first, but Step 3 must be achieved for ongoing success.

One thoughtful investor in municipal bonds, reflecting on Puerto Rico, Illinois and other troubled political entities, concluded, “We don’t trust governments.”  That made me think of how there have been more than 180 defaults and restructurings of sovereign debt in the last 100 years, and how further back, a number of American states defaulted on their debts, and even repudiated them.  So I wrote him, “I think that’s wise.”

Nonetheless, the immediate requirement to deal with the Puerto Rican debt crisis is a federal government action.

The Inadequacy of Trump and Clinton as Heads of State

The Future of Debt: A Law & Liberty Symposium

What makes sovereign debt sustainable, and for how long can this situation continue?

Rexford Tugwell and others drew what they thought was the obvious conclusion the Soviet Union was on the right track – and Hayek fought back.