In 1935, the Bolsheviks thought up a great way to make friends and influence people. They created a Popular Front and invited anyone who was left-of-center to join. Capitalism was faltering at the time, as was liberal democracy in Continental countries. Quite a few Americans and Europeans responded to the Pop Front outreach by welcoming Soviet Russia into the family of nations, honoring it as the lead power opposing fascism, and even hoping their own troubled societies would move toward the Soviet model.

Stalin was threading the needle with his bid for international solidarity. Communism was for all peoples, and would be the savior of mankind, but on the other hand, the dictator was a master of xenophobia. The violence he ordered against “socially harmful” ethnic minorities solidified his power. As today’s aspiring Russian dictator moves to restore territories lost when the Soviet Union fell, he too bids for an international solidarity that nobody is supposed to notice clashing with his Russian chauvinism. 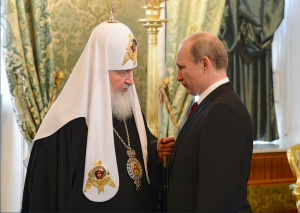 Vladimir Putin’s politics of international solidarity involve telling the West that he protects Western values better than we do. “Many Euro-Atlantic countries have moved away from their roots, including Christian values,” Putin said in 2013, in a state-of-the-nation address defending his government’s strictures against homosexuals. Its new law making it a crime to insult the religious sensibilities of believers was a response to a now-famous provocation by a female punk rock group, who chose Moscow’s largest cathedral to stage a profane anti-regime protest.

The culture war is a rough game over there. As the Washington Times reported at the time of Putin’s address, “The Kremlin’s encouragement of traditional values has sparked a rise in Orthodox vigilantism. Fringe groups such as the Union of Orthodox Banner Bearers, an ultraconservative movement whose slogan is ‘Orthodoxy or Death,’ are gaining prominence.”

This was not a combination envisioned by the founder of the Cheka, Lenin’s feared secret police chief, Felix Dzerzhinsky. But in today’s Russia, bygone movements and ideas are strangely amalgamated. Russia has been described politically as “Red-Brown-White.” The man trying to ride these forces—to cater to a motley political base containing Soviet nostalgiacs (Red), racialist bullies (Brown), and Tsarist nostalgiacs (White)—is Vladimir Putin. The common denominator is they want Russia to be great again and so does he.

It should be recalled that there is a Ukrainian Orthodox Church that disagrees with the Russian Orthodox Church. Friction between the two goes back to when the Soviet Union collapsed and Ukraine became independent. Ecclesiastical relations, needless to say, have not improved since March, when Russia annexed Crimea away from Ukraine and moved troops near the border.

Such European complications, which arise from not properly separating church and state, are generally lost on Americans. Hence the well-meaning Christians in this country who are impressed that “at least Putin is saying the right thing,” as one commenter on the Global Christian Post website put it.

Franklin Graham, son of legendary evangelist Billy Graham, sounded more circumspect than that person but only a little. “With the caveat that ‘I am not endorsing President Putin,’ Graham nonetheless praised Russia’s get-tough approach toward gay rights,” according to reporting picked up by the Charlotte News and Observer.

There are the well-meaning Christians and then, of course, there’s Patrick Buchanan. The columnist, former presidential candidate, and founder of The American Conservative called the state-of-the-nation address “Putin’s Paleoconservative Moment.” It was vintage Buchanan: half insight, half incitement. He wrote that while others may dismiss Putin “as an authoritarian and reactionary, a throwback,” his “moral clarity” was impressive. Puckishly Buchanan asked, “Is he one of us?”, adding:

Peoples all over the world, claims Putin, are supporting Russia’s “defense of traditional values” against a “so-called tolerance” that is “genderless and infertile.”

It’s a new popular front. Or it would be if Christians thought that, in standing against abortion and euthanasia and for traditional marriage—good causes, all—they would gain valuable assistance from the Kremlin.

With Marxism-Leninism a dead faith, Putin is saying the new ideological struggle is between a debauched West led by the United States and a traditionalist world Russia would be proud to lead.

The purpose of the follow-up was to list Putin’s intellectual and moral forebears. Or more accurately, to make some up. The only proper response upon reading that the musings of Vladimir Putin “carry echoes of John Paul II” is to groan. Pope John Paul II, born Karol Wojtyla, was a Pole. Presumably he is looking down at us from heaven not celebrating Putin’s “paleoconservative moment” but hoping that Ukrainians, Georgians, Poles, and everyone else in Russia’s “near abroad” keep the independence they won in 1991.

Bernie Quigley, an advocate of nullification who contributes op-eds to The Hill newspaper in Washington, D.C., was inspired by Buchanan to speculate further. What would happen if Americans, Quigley wondered, “turned to an older tradition and an external leader like Putin” to “find a better path”? Quigley was expressing the frustrations of ordinary Americans with bicoastal elites, and projecting what he hoped might happen. He granted that the moral rectitude out of Moscow wouldn’t find much purchase in snooty New England or other liberal enclaves. But “Putin’s Christian Russia will play differently in Dillon, Texas, where they baptize in the river and watch high school football on Friday nights.” It was all rather inchoate, but he sounded excited by Putin’s paleoconservative moment.

Some American conservatives have been gullible. Others, I hasten to add, have not. The Heritage Foundation hosted chess champion and leading Russian oppositionist Garry Kasparov in 2011, in the wake of then-President Dmitri Medvyedev’s announcement that he was stepping aside to let Putin run again. Accuracy in Media’s Cliff Kincaid poured scorn on the idea that the former KGB colonel and divorcee made a good representative of Christendom. Sarah Palin, too, must be counted here. (The I-told-you-so skit that she did with “Vladimir” Fallon on the Tonight Show is here.)

It isn’t really about ideas, or spirituality, or helping the West overcome its decadence. It’s about power. As Whittaker Chambers noted, the Tsars of Russia and the Bolsheviks who displaced them were consistent in their autocracy. That’s the tradition from which the leader of today’s “Red-Brown-White” Russia comes—not the one Patrick Buchanan concocts. Chambers, a Christian, is drafted by Buchanan as one of Putin’s philosophical forebears. This is rubbish, a level of tendentiousness seldom seen since the Pop Front days of Corliss Lamont. Adam J. White has reached back into Time magazine’s archives for “The Ghosts on the Roof,” the brilliant Russian satire that Chambers wrote—and not a moment too soon.

One Cheer for Scalia on Legal Education

Ronald Reagan, Whittaker Chambers, and the Dialogue of Liberty

The Right after Fusionism, Part 2: Whittaker Chambers and the Economic Temptation

Economic liberalism need not settle the question of who God is and what God has said and done, but it must at least recognize man's religious nature.

The Russians: Using Us without Signing Us Up

Democrats and Republicans in Washington drove each other crazy over espionage 70 years ago. It’s deja vu all over again.