This year’s Federalist Society convention had it all. Prospective presidential candidates. Potential Supreme Court nominees. Lively debates on issues ranging from the proper role of federalism to the impact of the Obama Administration’s regulatory agenda. Throughout the convention, many speakers, of all ideological stripes, agreed that the Obama Administration has taken a very expansive view of executive and agency power. 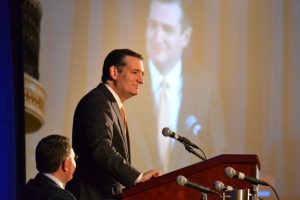 One of the first prominent speakers, Senator Ted Cruz, discussed the Administration’s track record in the Supreme Court on the scope of executive power. A former law clerk to Chief Justice William Rehnquist and longtime member of the Federalist Society, Cruz highlighted nine cases in which the Administration unsuccessfully sought to expand the scope of executive power. In those nine cases, the Administration’s position lost unanimously, failing even to garner the votes of either of President Obama’s own nominees, Justices Kagan and Sotomayor. For instance, in United States v. Jones, the Administration sought to place a GPS tracking device on a suspected drug dealer’s car — without a warrant. In Sackett v. EPA, the Administration sought to deprive landowners of the right to challenge potential government fines as high as $75,000 per day. According to Cruz, these unanimous losses demonstrate that the Obama Administration has taken an overly aggressive view of executive and federal power. Cruz, who received a standing ovation, interspersed history and humor throughout his speech, sharing anecdotes about his time at the Supreme Court.

Another prospective presidential candidate, Wisconsin Governor Scott Walker, also received a warm reception. Coyly alluding to his presidential prospects, Walker praised current Seventh Circuit Judge Diana Sykes (who formerly sat on Wisconsin’s Supreme Court), and stated that he “would welcome the opportunity to appoint her to something else.” After describing Wisconsin’s many recount battles and legislative dramas, Walker devoted much of his talk to the judiciary. He explained both the process and criteria he used to select judges in Wisconsin. Walker tasked a panel of experts, headed by a prominent member of the Federalist Society, to create a list of judicial candidates who would satisfy three criteria: integrity, exceptional ability, and perhaps most importantly, an understanding of the proper role of the judiciary. Walker noted that, unlike some of his predecessors, he did not place the highest value on a prospective judge’s electability.

Justice Clarence Thomas provided the highlight of the convention. Speaking with Judge Sykes during an informal interview, Justice Thomas described his life and career in personal, sometimes moving terms. He discussed his early life in Savannah and initial desire to enter the seminary, his battles with racism, and struggles finding work after graduating law school from Yale. He heaped praise on his many friends and mentors, particularly Senator Danforth and Justice Scalia, while sadly stating that he felt like his alma mater had abandoned him. He touched only briefly on his judicial philosophy. He noted that his colleagues encourage him to write what he thinks, even if they disagree with him. He stated that he respects the principle of stare decisis, but “not enough to keep me from going to the Constitution” (this line received standing applause). Mostly, Thomas described his happiness with his job and his colleagues. If he harbors any bitterness from his contentious confirmation fight, or anything else, he showed no signs of it.

Tenth Circuit Judge Neil Gorsuch delivered the Barbara Olson memorial lecture. In a thoughtful, amusing address, Gorsuch analyzed the state of the legal profession and the practice of law. Quoting Bleak House, he expressed concern for the time and expense involved in discovery, especially e-discovery. He worried that the trend toward private mediation may deprive businesses of valuable precedents, and more generally, that the trend may show that the court system no longer works efficiently.

In addition to the big speeches, the convention also featured panel discussions on a range of interesting topics. One panel tackled Noel Canning, in which the Court will consider the scope of the President’s power to make recess appointments. That panel featured prominent conservative lawyers on both sides of the issue, and saw the Obama Administration’s advocate repeatedly cite the actions of President Reagan. Other panels discussed the Administration’s use of disparate impact theory, regulation of free speech, the NSA, and approach to the financial crisis.

As with any convention, some of the most interesting conversations take place in the hallways and bars, rather than at the podiums. Many attendees discussed the 2016 elections and the prospects for various potential candidates on both sides of the aisle. Based on a sample of those conversations, there is no consensus as to who is likely to emerge as the Republican candidate. Virtually all of the frequently mentioned possibilities had their supporters and detractors. If the convention is any indication, the field is wide open.

Another set of conversations proved more troubling. It seems that lawyers are, in fact, people too. More than a handful of attendees complained that the Affordable Care Act had caused some members of their family, such as a sibling or parent, to lose their insurance. For instance, one prominent lawyer noted that her elderly mother, a cancer survivor, had lost her insurance recently, and that her mother would have been in deep straights had she not had a lawyer in the family. Other attendees exchanged similar stories.

In one sense, Obamacare highlights the value of the Federalist Society and this convention. The debates about the proper scope of the national government and executive branch are more than academic exercises, worthy only of dusty law reviews that no one ever reads. These very real issues continue to affect very real people.

Even More About NFIB v. Sebelius

Leaving Behind a Bankrupt Congress