It is not difficult both to dislike and to criticize consumerism. It is often as vacuous as it is unattractive. Last week, for example, my wife took me to something called an ‘outlet village,’ an expanse of shops built in faux Eighteenth Century style that sold designer products at allegedly low prices (though, wanting nothing in particular, they seemed high enough to me). There was actually a queue to obtain entry into Prada whose products are hardly those of first or primary necessity. However deep our economic crisis, this was no queue for rations in wartime; and though I am far from an egalitarian I felt uneasy that there were so many people wanting and even eager to pay hundreds or perhaps thousands for what seemed to me to be aesthetically cheap and vulgar gewgaws while so many people await their heating bill with extreme anxiety and trepidation.

If I am honest, however, what really appalled me about the ‘outlet village,’ which, incidentally, proclaimed itself a ‘community,’ was the appalling taste of the moneyed masses. Though they shopped all day for clothes – you couldn’t buy so much as a newspaper, let alone a book, in the ‘community’ – I didn’t see a single smartly dressed person among them, let alone an elegantly dressed one. On the contrary, they were to a man and woman attired in expensive slum- casual garments whose brands alone distinguished them from what the poor would wear. As consumers, then, they weren’t even very good at what they did, namely consume. They wore brand names as if they were medals awarded in the war to distinguish themselves as individuals from others in some way. If the justification for disparities in wealth is that the wealthy beautify the world, these people failed utterly to justify their prosperity. Purchasing power without power of discrimination is (at any rate for me) dispiriting to behold; but I am under no illusion that if income and assets were more equally distributed in society things would be any better from the aesthetic point of view, irrespective of the economic or social effects of redistribution.

Appalled or even disgusted as I was by what I thought was this vast outdoor exhibition of mass vacuity and spiritual emptiness, to say nothing of absence of taste, I kept enough control of my gut reaction not to suppose that it would be a very good guide to or motive for economic or social policy. It is very easy when appalled by one’s fellow human beings to want impose virtue (or taste) upon them, but this is a temptation that should be resisted. Deeper reflection is necessary; intemperance and impatience usually end in something worse than they were designed to amend.

I was therefore not completely out of sympathy with some of the premises of the Pope’s latest apostolic exhortation, Evangelii Gaudium, the Joy of the Gospel; but it seems to me that he has yielded in it to the temptation to mistake an initial apprehension of what is wrong as an understanding of economics. 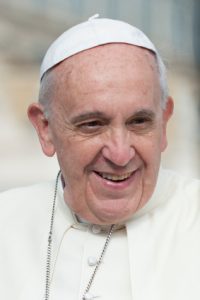 His apprehension of certain trends in modern societies was one which many people share, so many in fact that it was almost banal or at any rate commonplace (precisely as was my reaction to the ‘outlet village’ and those who shopped there). We – by ‘we’ I mean all who are likely to read this – are aware that a life of consumption of ever more material goods is profoundly unsatisfying and in the end self-defeating. We all know that an egotistical individualism is deeply unattractive and not even satisfying to the many millions of whom it is the leading characteristic. Even the improved means of communication that the Pope extols in his exhortation may not only conduce to self-preoccupation but serve to isolate people further. A million monologues is not a conversation.

So far, so good – that is to say so far, so banal. But the Pope, alas, then indulges in a little Peronist economics. I hesitate to call his theorizing mediaeval because scholars will inform me that, in fact, some of the scholastics were far more sophisticated in their economic understanding than we usually credit them with, getting well beyond denunciations of usury. I am not sure the Pope has got much further.

He writes, inter alia, that ‘Today everything comes under the laws of competition and the survival of the fittest, where the powerful feed on the powerless.’ This is demagoguery of the purest kind, the kind that ruined the Pope’s native Argentina seventy years ago and from whose effects it still has not fully recovered.

‘As a consequence,’ continues the pope, ‘masses of people find themselves excluded and marginalized: without work, without possibilities, without any means of escape.’

If we put the two sentences together, a certain conclusion is inescapable: if only the powerful stopped cannibalizing the powerless, the latter would have work, possibility and the means of escape. To change slightly the framework of reference, four legs good, two legs bad.

The Pope is loose and inaccurate in his thinking. The trickle-down theory of wealth may or may not be correct, but those who hold it do not express, and never have expressed, ‘a crude and naïve trust in the goodness of those wielding economic power…’ On the contrary, according to the theory it is not the rich whose goodness benefits the poor, but the system that allowed them to become rich, even if the rich should turn out to be hard-hearted skinflints. A system of redistribution, by contrast, really does require the goodness of at least the superior echelons of the system, faith in which is genuinely rather crude and naïve.

Most egregiously, the Pope quotes from St John Chrysostom:

take away their livelihood. It is not our own goods that we hold,

This could only be true if an economy were a zero-sum game, if my wealth were your poverty and vice versa. But if the world has learnt anything since the death of St John Chrysostom one thousand six hundred years ago, it is that an economy such as ours is and ought to be dynamic rather than static. I am not poor because Bill Gates is rich; as it happens in enriching himself he enriched me, though the ratio of his wealth to mine is probably greater than the ratio of my wealth to the poorest person in my society. I do not care; it does no harm to me unless I let it do me harm by dwelling upon it. In the meantime, I have enough to eat and much else besides.

This is not to say that all is for the best in this the best of all possible worlds, far from it. The world is full of dishonesty, corruption, cruelty, indifference and injustice. But Peronist demagoguery dressed up as apostolic exhortation will not improve matters, quite the reverse.

European Social Democracy Isn’t What You Think It Is

There would be no “social” in Europe’s “social market economy” without the strictly market-friendly rules essential for economic efficiency.