Chaucer’s Wife of Bath entertains us with a tale about the question, What does every woman most desire? Plot spoiler: To rule her man. Shakespeare’s comedies respond to this desire.

His comedies portray cunning and attractive women who win the object of their desires and fend off evil that threatens their love (Portia in The Merchant of Venice). The plot could easily lead to tragedy (Romeo and Juliet), but instead powerful will, aided by chance, enables the perfect matches to take place (Midsummer Night’s Dream).

Perhaps the greatest of Shakespeare’s tragedies, Coriolanus, also features the quintessential Roman woman, Volumnia, whose son is Rome’s greatest warrior. But his pride overrides any prudence he has in speaking to the people. Coriolanus’ insults are among the most delicious ever uttered. His undiluted virtue would destroy Rome, and he must be expelled from it. His response: “I banish you!” 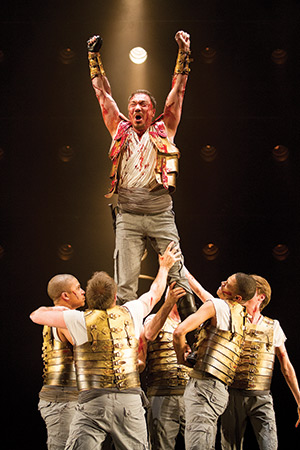 The Shakespeare Theatre (link no longer available) of Washington DC is staging an extraordinary production of Coriolanus—you have this weekend left to savor it. Terry Teachout’s review conveys the power of the performance, while Wheat&Weeds adds some mild criticism. The ingenuity of the director, David Muse, can be seen in his interpretations, for example, portraying Volumnia playing war with her grandson (see photo below) and, less satisfactorily, his text-amending ending. Particularly powerful is the literal elevation of Caius Martius into Coriolanus (Patrick Page, photo). Most gripping of all, Muse stuns the audience with the martial sounds of war in waves of drum choruses. If you had the good fortune of seeing the Shakespeare Theatre’s Henry V a few years ago, you know Muse’s virtuosity.

Productions of Coriolanus fail (even with Alan Howard and Judi Dench) when they transpose the tragedy into impossibly different historical situations, in Revolutionary France, or in Ralph Fiennes’s film version, with Fiennes, Vanessa Redgrave, and Jessica Chastain, in the contemporary Balkans. Weimar Germany saw pro-Communist and pro-Nazi stagings. Yet I would not object necessarily to a Coriolanus set in the wild west or as a gang-banger—he is at bottom a pre-political man. Shakespeare is writing a history of the human soul, not Roman history.

This terrifying figure, simultaneously attractive and repulsive, raises the question of whether political life is possible without the intervention of such men. Is it possible to go outside the rule of law in order to save it from its worst enemies? We wonder as well whether such a soul should seek his happiness in politics.

In his Roman plays—Coriolanus, Julius Caesar, and Anthony and Cleopatra—Shakespeare explores the rise of the Roman empire and the origins of Christianity’s power. The response to a man becoming a god (Julius Caesar) is God becoming man (Jesus Christ).  The Merchant of Venice, a bizarre comedy, portrays a decayed Christianity in a multicultural world that appears held together primarily by markets. Volumnia would not pose in a Pieta. Instead, she becomes Portia. In these four plays, we see encapsulated the history of western civilization.

In the comedies the women rule; they are clearly superior to the men in intellect and character, with their chief flaw being their desire for inferior men. The Folger Theater production of Twelfth Night (link no longer available) brought forth all these tensions and strivings, enhanced by Tin Pan Alley and other early twentieth-century music, European and American.   The play’s title, the twelfth day of Christmas before the epiphany, raises the question of what honor we will pay to Jesus. “What you will” is the play’s subtitle. The expulsion of the Puritan Malvolio is one sign. Is the love we see in the comedies complete only with Christian love (agape)? 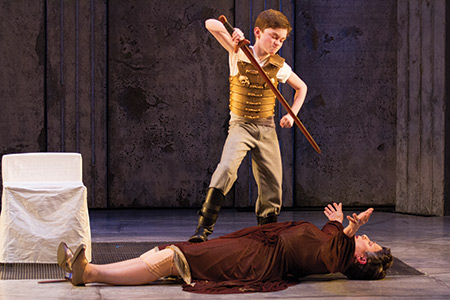 These themes weighed upon me when I attended a high school assembly where my daughter was inducted in an Honors Society, along with other students for other Honors Societies. The overwhelming majority of the students were women.

Will we live in a kind of regime of Shakespeare’s comedies, where the women rule? Whereas Aristotle thought the marriage of a man and a woman was an example of the equality of political rule, with the partners exchanging functions, we are seeing a stratification of society along sex lines. But no one would say we are now living in a Shakespearean comedy (though perhaps in an Aristophanic one). Yet, as we can still appreciate Coriolanus, the time of tragedy is not quite yet over. So we know that politics is not only still possible; it is more necessary than ever.

Equality versus Feeding the Hungry

It is simply too pat to point to bare economic inequality and decry it as necessarily unjust: pursuing equality can often harm growth.

Pantagruel Comes for the Establishment Clause